With "Unbound," at Burlington's BCA Center, curator Heather Ferrell has created a remarkably coherent exhibition of abstract work by Rachel Gross, Rob Hitzig and Kirsten Reynolds. All three artists work in painted wood and reject the rectangular frame, that impersonal and limiting traditional format in art and architecture. They're also linked by a playful interest in spurring viewers to question what they're seeing — to use imagination and narrative to engage with the art.

Viewers entering from Church Street walk into a mystery. Reynolds' "Spillover," commissioned by the BCA and created specifically for the gallery's front room, consists of three airy 3D grids of two-by-four framing. Some of the extruding posts are capped with long, painted arcs made from bent plywood. A fragment — one brief arc attached to a post — lies to the side of a structure as if discarded or fallen.

The constructions nearly fill the space, dwarfing human visitors. Tipped on their sides, they force viewers to walk a single path around them while wondering, What happened here?

Reynolds, an installation artist based in Newmarket, N.H., wrote her MFA thesis for the Maine College of Art & Design on the carnivalesque in art and culture. That wide-ranging net has led her to an interest in theoretical approaches to architecture. "Spillover" upends the traditional idea of architecture as stable, completed spaces that endure. The installation hovers between about-to-be-finished and abandoned; either narrative seems valid.

"Spillover" even destabilizes the idea of a built structure. In a comedic wink, the two-by-fours' "grain" has been meticulously painted on, and the sets of wooden pegs protruding where planks intersect (and occasionally where they don't) merely create the illusion of post-and-beam construction. The framing is actually held together with hidden screws.

Reached by phone, Reynolds characterized her work as "pushing away from" that of abstract minimalists such as Donald Judd and Richard Serra. Speaking of those sculptors' scale and materials — Serra's massive sheets of steel, Judd's 100 aluminum boxes in Marfa, Texas — Reynolds noted "an overwhelming macho-ness about their work, like, Here I am; take it or leave it.

"I find that, as a female artist, being slightly subversive, a trickster with materials, is a way of reacting to and critiquing those predecessors," she added. 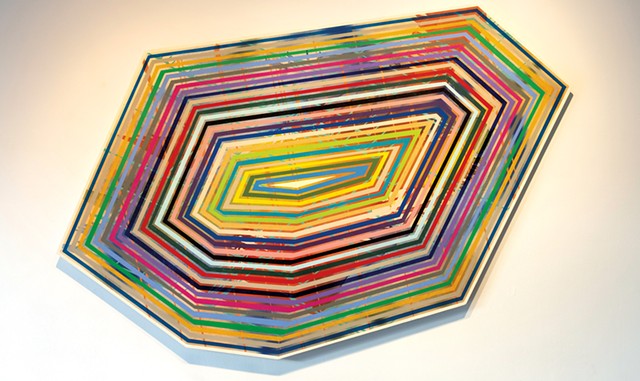 "Onotonto," commissioned by the BCA, is a seven-sided birch panel, 44 inches high and 66 across. From a distance, it appears painted in a way that emphasizes its polygonal shape: Nested bands of color outline the form in diminishing size until they enclose a small, white triangle at the center.

But a closer look reveals a lot going on underneath that controlled geometric surface: Radial graphite lines appear to reference an abandoned intention, and dyed shellac has spread like watercolor stains, intersecting lines of dripping acrylic paint.

After taping and painting the bands of color, Hitzig applies a layer of clear shellac, then alternately rubs and sands it until he achieves a luster that still retains texture, he explained in a phone call. More texture comes from two initial layers of gesso applied to the untouched wood surface perpendicularly, creating a woven look.

While similarly painted, the seven-sided "Aspienta," another commission, has an entirely different shape from "Onotonto," and "Noringatt" has six sides. (Hitzig's nonsense titles are meant to provoke imaginative engagement, according to a label.)

An earlier work from 2012 that Hitzig returned to in 2020, "Always There," consists of four joined maple panels with a highly lustrous shellac finish that showcases the wood's grain. On closer inspection, the panels aren't entirely flat. Each is a wedge, joined in a way that evokes a folding screen.

Shaped paintings have a long history but gained prominence in the 1960s, particularly because of Frank Stella — Hitzig's primary influence. However, Hitzig, a self-taught artist, brings an entirely different toolbox to his shaped work.

A former Peace Corps volunteer who spent three years as a forester in Benin and Senegal, Hitzig carried his interest in wood back to Washington, D.C., where he started making furniture in a woodworking club while working for the U.S. Environmental Protection Agency. He moved to Vermont in 2004 to focus on making art from wood. But Hitzig continued to apply shellac to his works — a laborious furniture-finishing skill he learned at the woodworking club — for the sense of depth it contributes.

"Depth on a flat surface, multiple levels at the same time, the creation of mystery — I hope it's confusing, but a confusing that draws you in," the artist said of his work.

Gross' shaped plywood paintings play with the viewer's sense of depth even more directly. A printmaker by training, the Hartland artist earned her MFA at Temple University's Tyler School of Art and Architecture in Philadelphia. She has a quartet of woodblock relief and intaglio prints in the show titled "Pine Wraith," "Album," "Carapace" and "Anchor." The works create the illusion of depth by layering polygonal and organic shapes, some conforming to the rectangular limits of the paper and others extending beyond so that their shapes look sliced off by the frames.

Gross is keenly interested in texture in these prints, as well as in her three large wall-hung works on shaped plywood. The latter actually incorporate finely textured prints, cut and glued to sections of the plywood. In some cases, viewers must puzzle out which wood grains are printed and which are real. 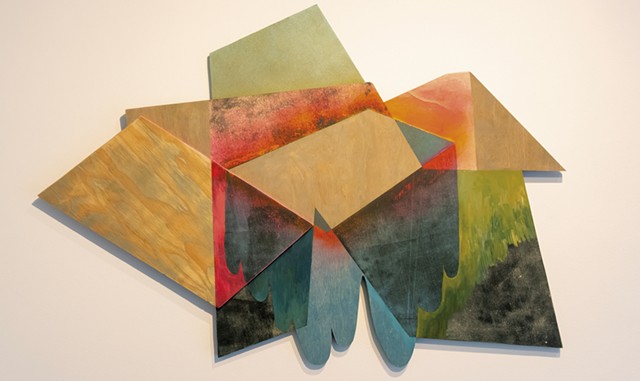 "Ascension," a 32-by-48-inch piece, is made from only three overlapping pieces of plywood, but Gross' techniques make it appear as if many more surfaces are in relief. Finely grained prints of different colors overlay, or create apparently solid edges with, visually contrasting surfaces, complicating borders everywhere. Fluorescent orange and pink spray paint edging a central box lends a glow and illusory depth to the shape, as if the box is ascending to the heavens.

"Ladder," another work on plywood, is a collection of geometric planes that could be receding from or jutting into space, folded over each other or unfolding. A sky-blue polygon near the top of the work, taken together with the title, seems to imply the endpoint of the ladder.

Gross said of her art, "It goes back to the idea of art creating a fantasy world you can move into — like it's this window into a space that draws you in, the idea that there is a secret room."

Notably, the work of all three artists in "Unbound" suggests secret rooms. It is left to the viewers to conjure them.

The original print version of this article was headlined "Shape Shifters"