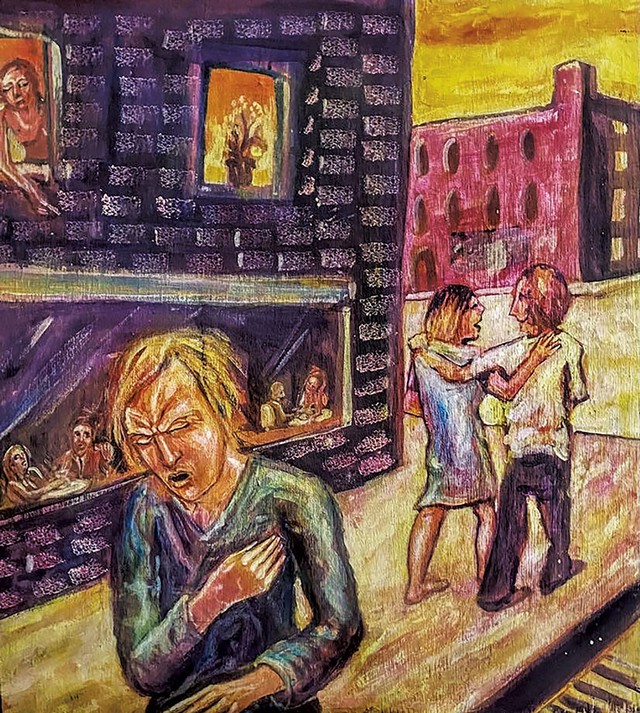 It's a show nearly everyone in Burlington has seen, though not heard: "Phish Concert," a mural on the North Street side of Nunyuns Bakery & Café, epitomizes a long, strange trip.

Motley pilgrims walk, crawl or ride a chicken on a magenta-hued road toward a distant stage. One of the phans is a creature whose backside is a set of stairs. A smiley-faced clock carrying a briefcase walks in the opposite direction. A huge, deific eye hovers in the sky.

The wondrous landscape includes a rocket ship, a waterfall, a sky-bound ladder supported by nothing, a pair of snowmen, Santa with a red-and-white-striped (north?) pole, and a deep gulch whose occupants seem unfazed to be stuck there. In the lower right corner, a facsimile of Edvard Munch's screamer looks very fazed indeed.

This whimsical, colorful, richly imagined vista is the work of Tony Shull; it's one of numerous murals, painted utility boxes and other works the self-taught artist produced over a lifetime in Vermont. Though he was born in Minnesota and ventured to a few other locales around the country in his youth, Shull spent most of his life in Burlington. A beloved fixture of the local art scene, he died of pancreatic cancer earlier this month at age 75. (See his obituary here.)

Ken Axelson, who owns the Nunyuns building and lives upstairs, was a close friend of Shull's for more than five decades. In addition to multiple murals on the property, Axelson possesses a number of Shull's paintings and assemblages, including a music box Shull made from a discarded toy radio. The bright-yellow toy came with a feature the artist surely appreciated: a smiley-faced clock. Inside the box, he created a moving scroll that unfurls an incongruous parade of nude female figures.

Shull's work is all over town. Near the café, another striking mural adorns the west wall of Vantage Press. On Ward Street, a large box of indeterminate purpose boasts an abstract design in iridescent yellow, a color Shull favored. The patio of Drifters, a soon-to-close restaurant on North Winooski Avenue, is painted in psychedelic hues that nearly leap off the wall. Downtown, in an alley off Cherry Street near Ben & Jerry's, a "portrait mural" invites passersby to stand against the human-shaped white space at the center of another vivid abstraction.

A recreation of that last mural is part of a Shull retrospective currently on view — by appointment — at Sequoia Salon on Kilburn Street. Organized by local photographer Carolyn Bates, the exhibit features original paintings and prints, with the latter available for purchase.

Bates was working on a book about Burlington murals when she met Shull; he was her first interviewee. This spring, when she learned he was sick, Bates shifted gears. "This project has taken on its own life," she said of the Shull exhibit.

Anthropomorphized clocks recur in the collection, along with other frequent elements in Shull's work. Whether seriously or facetiously, he claimed to have been abducted by aliens as a child. This scenario, which he "documented" in a painting, fueled his preoccupation with extraterrestrials, rocket ships, astronauts and space.

"It probably came from his own sense of alienation," Axelson observed.

Shull often deployed these ideas in humorous ways. His painting "Thursday Is Pizza Night" depicts a rocket ship that is open on one side, dollhouse-like, to expose five levels within. The third level, a kitchen, features tiny chefs preparing Thursday's feast; other floors reveal the travelers playing music, sleeping or minding the business of hurtling through space.

Another painting, "One Giant Leap for Mankind," presents a visual pratfall. A rocket ship has landed on a planet, and the astronauts have opened a door and stuck out a ladder. Having apparently stumbled while descending, the first astronaut lies on the ground, distraught — or maybe just embarrassed, given that the other two astronauts are pointing and laughing at him. Any klutz among us can relate.

Burlington resident Megan Humphrey became friends with Shull in the early 1980s when both lived on North Willard Street. She recalled finding a recycled-art gift from him one day, surreptitiously placed in her backyard.

"It was a spaceship with Martians and a sign that said, 'Hello Earthgirl, you are beautiful!'" Humphrey said.

Not all of Shull's gifts involved outer space. He also offered up painted found rocks or scraps of wood — "He would just use anything, he was so clever," Humphrey said.

She extolled Shull's love of word play, including spoonerisms. "He would say something and then do this little chuckle, kind of to see if you got it," she said.

Shull also had a thing for his"Egg Man." Many locals will remember his enigmatic mural, "Egg Man Comes to America," on the side of Dough Boy's Bakery & Coffee Shop, a Pearl Street institution that closed in 2011. The long, horizontal painting featured an ovoid character hoisting an American flag on one shoulder and shaking a man's hand.

Apparently the Egg Man was newly arrived in the USA. Where, though, was the question. A yellow mountain range provided the backdrop for a stark, leafless row of trees hugged by clothed or nude figures.

The painting also included two iterations of another Shull motif: human heads as receptacles. On the far left, a staircase extended from a doorway in one head, allowing figures to exit as if from a plane. In the center, another large head lay tipped on its side with various contents spilling out. The Egg Man seemed blissfully unaware of the disturbing landscape around him.

"I think the Egg Man is his little benevolent creature that wants to bring peace and gentility and unification," Axelson opined. "The mural on Dough Boy's was classic Tony. It's too bad it got painted over."

The creature has an entirely different experience in "The Cleansing of the Egg Man," a print of which can be seen at Sequoia. Here the Egg Man is more of an egg cup with legs; next to him, a man pours water into the cup while covering his eyes with his other hand, as if he can't bear to watch. Or perhaps he's shutting out the figures, faces and objects that swirl like a bad dream in this sinister, surreal scene. Salvador Dalí springs to mind.

Shull plumbed psychological depths in many of his figurative works. If some of his paintings recall the cheerful naïveté of the late Vermont folk artist Gayleen Aiken, others hint at darker moods, complicated relationships or the weird state of the world.

Sorrow is openly on display in "Heartbreak," another painting in the Sequoia exhibition. In the foreground, a man walks down a city sidewalk, one hand clutching his heart. He grimaces with pain. Behind him, a happy couple walks arm in arm in the opposite direction. An adjacent restaurant window reveals diners gazing at the passersby, an unwitting audience to this theater of human emotion.

Axelson noted that Shull often painted himself in his works — he was a handy model, after all. In "Heartbreak," Shull is both the heartbroken man and the happy man. "He bore witness in his work," Axelson said.

That quality may be especially poignant in works that express Shull's empathy. In "People Who Have Fallen Thru the Cracks," he presents that plight literally: Eight people stand inside a fissure in the desert-like earth — one of them a long-nosed blond like Shull himself. Above, a man looks down at them with his fingers laced behind his back, indicating his unwillingness to help.

As his friends describe Shull, disinterest would not have been his response to people in need — or animals, for that matter. "Tony's sense of himself was a Saint Francis of Assisi character," Axelson said. "He had a way with animals that was unusual. He told me about a pigeon he had once; it was injured, and he took it in. They would sit and watch TV together, and Tony would gently stroke it. That just describes the way he was."

"He was really one in a million," Humphrey agreed. "A funny and kind guy."

Shull reportedly had no interest in material or artistic "success" as conventionally defined. He pieced together a living painting interiors and performing a variety of odd jobs. He was driven to make art for the pleasure of doing so. If alien visitors find these treasures one day, surely they will marvel at the fantastical mind of the Earthling who made them.

"Tony was a unique person," Axelson said. "He was one of few people I have known who was true to himself."

The original print version of this article was headlined "Of Eggs, Aliens and Men | The Tony Shull retrospective at Sequoia Salon is a heady experience"