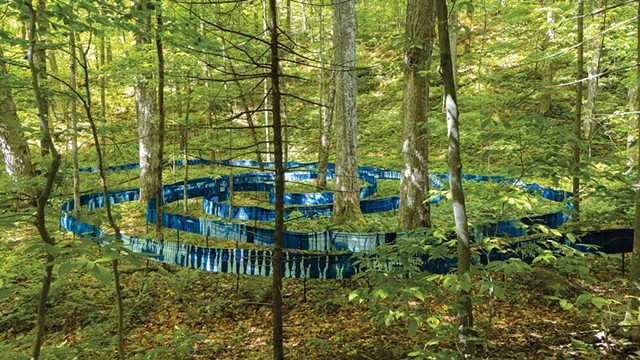 Artwork does not usually share space with 142 bird species, denning bobcats and endangered bats. But the Raven Ridge Natural Area, which straddles parts of Hinesburg, Charlotte and Monkton, is not a conventional gallery. Far from a white-walled box, this spot can trace its origins to a melting continental ice sheet 15,000 years ago. Its "walls" are craggy rock faces, mottled with lichen and shaded by towering deciduous trees.

This is where Tunbridge artist Elizabeth Billings chose to site an installation — one of three she created in different locations as the first-ever resident artist for the Nature Conservancy.

"I want to reconnect people with nature." Elizabeth Billings tweet this

Last year, the pandemic dashed the Vermont chapter's plans for a 60th anniversary gala to celebrate its work and thank its supporters, director of philanthropy Catherine Newman explained. That's when an anonymous donor stepped in and offered to underwrite an artist residency for a year. The goal of this "engagement," according to the Conservancy's website, was "to elevate the relationship between nature and art during an unprecedented year when many found solace in nature."

Many, indeed; communications director Eve Frankel told Seven Days that in 2020 an unprecedented number of visitors took refuge in the Conservancy's natural areas around the state. The website even cautions visitors to Raven Ridge: "If the parking area is full when you arrive, please consider using other trails." 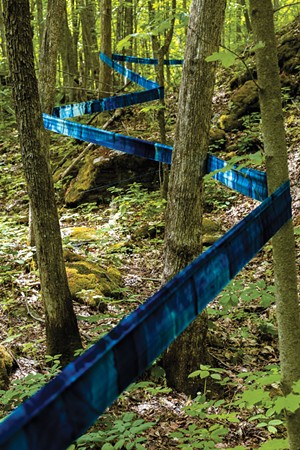 The area is, after all, a sensitive habitat, and protecting it is the whole point. The Conservancy is a global organization with a chapter in every state; in Vermont, Frankel said, the nonprofit is the second-largest landowner, with a network of 58 such natural areas.

Perhaps the public needs no extra incentives to take a walk in these wilds. But visitors to Raven Ridge, LaPlatte River Marsh Natural Area in Shelburne and Equinox Highlands Natural Area in Manchester will surely find their experience enriched by Billings' reflective embellishments.

The artist's engagement with those sites began last September; her installations opened to the public last week. In between, Billings walked, studied, mused, made rubbings on trees, took photographs and, finally, created the materials for these works. Her contemplative observations will continue through the summer in journal and photographic form, shared on the Conservancy website.

Last week, Billings and Frankel met this reporter at Raven Ridge — or, rather, at the small parking lot across the road from the entrance — for a guided tour up to the installation. And "up" is the operative word. An accessible wooden boardwalk from the road crosses a grassy area that is swampy in the spring, after which the trail ascends. Navigating it requires attention to protruding rocks and fallen branches along the way.

As we chatted amiably — three figures speckled with sunlight filtering through the trees — we could hear but not see tiny creatures darting through the greenery. The woods met our human disruption with gentle rustles; when we quieted, it felt like a communion.

Twenty minutes in, we glimpsed the first ribbons of blue: cyanotype-treated cotton fabric that is only inches high but more than a thousand feet long, Billings said. It winds around and among the trees, loosely following the ridge line above. The horizontal stripe, placed at roughly eye level, "just calls attention to the place," Billings said. It enhances the sense of beingness that was already there, creating a shape that embraces but does not enclose.

One may initially associate the ribbon with the blue plastic sap lines in a sugar bush, but that's not quite right. "It's like the maple syrup lines; it's ridgeline; it's Christo," Billings suggested, referring to the late artist famous for massive wrapped installations. "I thought of blue because of water and sky, and it's such a nice contrast to the green." In the winter, of course, this thread of blue will assert itself against white.

It seems that Billings, a longtime ikat weaver, has created a weaving of sorts with the elements — "an overlay of human intentionality," as she put it.

She marvels at how this wild area restores itself — "The water coming off the ledge is carrying minerals to the soil," she said — and how death begets new life in an endless cycle.

"It's temporary," Billings said of her organic installation. "We're temporary."

That Buddhist sensibility suits her; Billings is gentle and kind, though her devotion to the Earth is as fierce as it is spiritual. She tears up thinking about the harm humans inflict on the planet. And she has made scientists cry, Newman said, with her "poetic" Zoom presentations to the Conservancy staff.

"I want to reconnect people with nature," Billings said. "I hope the essence of this work is an offering to the courage of reconnection."

Billings has made such offerings in the form of installations around the country — often created with fellow Vermont artist Andrea Stix Wasserman — over 25 years, she said. Her interior works typically use natural materials, such as the mural called "Maple Apple Birch" that she and Wasserman installed at Burlington International Airport in 2001. She has also done eco-oriented artist residencies with her husband, photographer Michael Sacca.

At the LaPlatte River Marsh, Billings had occasion to work with her son, Mario Sacca, a woodworker. The project there is more conventional but no less thoughtful: The two conceived of and built a graceful bench that faces and mirrors a curve in the nearby river. Its uprights are tree crotches, its seat a live-edge plank.

At Equinox Highlands, Billings again used cyanotype-blue fabric strips, this time to create a labyrinth. It's unexpected in the middle of the woods, she noted, "but people know what to do with it."

One can't help but wonder whether Billings came by her love of nature and conservation genetically. She is related to the namesakes of the Marsh-Billings-Rockefeller National Historical Park, which encompasses a working farm and heritage museum.

It was there that Frederick H. Billings established a managed forest and model farm. His granddaughter, Mary French Rockefeller, and her husband, Laurance Rockefeller, a conservation adviser to presidents, later gifted the property to the U.S. government.

Elizabeth Billings does not aim to craft historic landmarks; her work for the Conservancy is not meant to survive the ages or attract hordes of tourists. Her installations are subtle provocations, reminders that humans are connected to the web of all life. She likes to quote Scottish American naturalist and author John Muir: "[F]or going out, I found, was really going in."

"That's what it's all about to me," Billings concluded.

The original print version of this article was headlined "Saving Place"