If someone calls you "photogenic," you must look great in your selfies. Even so, you are probably not "producing or generating light," which is another definition of the word. And "photogenic drawing" is another order of image making altogether. Invented in the 1830s by photographer and inventor William Henry Fox Talbot, the technique generally entailed contact printing an object on specially prepared paper, which was then fixed in a salt solution. It was a marvel in the 19th century.

Thomas Brennan's current exhibit at the BCA Center, titled "Darkness From Light," owes something to this, er, development in the history of photography. But his stark, mysterious images raise the ante in the camera-free game. Instead of objects, the subjects of these photos are their shadows, which Brennan calls "the most perfect and least perfect records."

Positioning photographic paper on a surface in a darkened room, Brennan used a light source to capture this ghostly data. (He notes that a synonym for ghost is "shade.") The objects — molecular or celestial models, vintage scientific instruments and ornithological specimens — are represented as inky silhouettes in a creamy white field. Their three dimensions are flattened, their original identities at least partially obscured. (Think of how you can recognize your shadow against a wall but you can't see the unique details that make up you.)

Depending on Brennan's — or rather the light's — vantage point, the images are transformed. The photographer has played with this POV to show how perceptions can change with incomplete or distorted information. Objectivity becomes abstraction; meaning is dispersed. As Brennan puts it, he is shooting the absence of something, rather than its presence. That opens up all manner of "meta" interpretations and raises the question: Is the metaphor here, in fact, the art?

Brennan has been an associate professor of art at the University of Vermont since 1989 and chair of the department of art and art history since 2012. For much longer than that, he's been enamored of photography; he earned his master's in the medium from the University of Arizona, and his work has been exhibited around the country. What sets "Darkness From Light" apart from a typical photography exhibit, including Brennan's own past shows, is its ephemerality. Each of his images captures something that doesn't exist — a shadow — except, for a moment, it did.

"I wanted to take something so simple, so limited, and see how far I could take it," Brennan says. 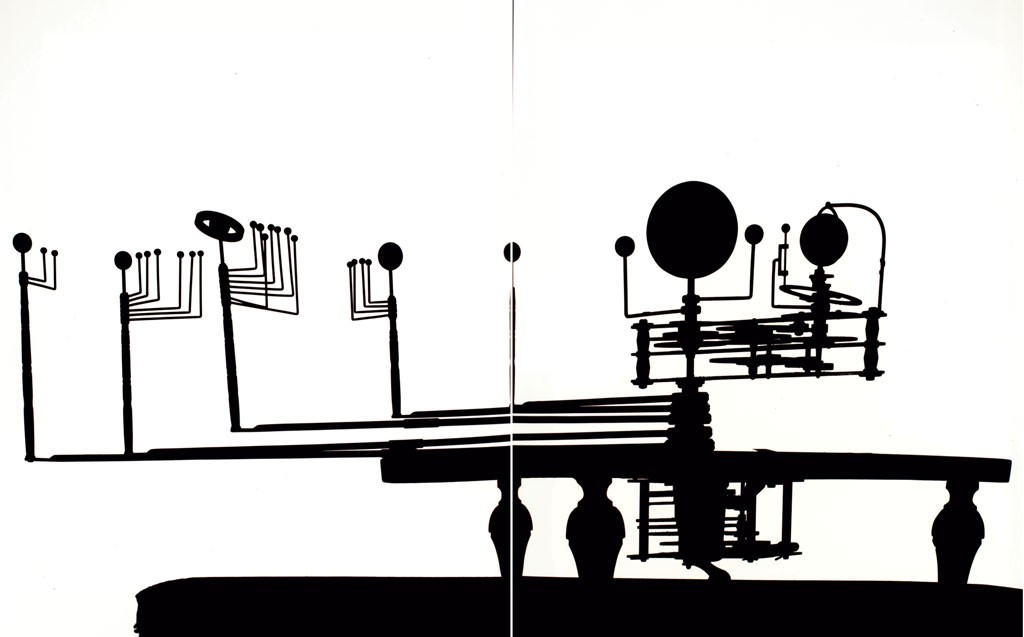 His source material is unorthodox, too. Brennan procured the items from a number of museum collections on two continents — the Museum of the History of Science, University of Oxford; the Science Museum Group in Britain; and the Museum of Comparative Zoology at Harvard University, to name a few. Scientists originally collected these specimens and built these models to understand and explain the universe — from the electron to the solar system; from the sperm whale to the hummingbird. Ironically, Brennan is not interested in such explaining, preferring that his images serve as stimuli for viewers' own responses.

When he entered college, Brennan loved the sciences, from physics to biology, he says. Born between the atomic bomb explosions in Japan at the end of World War II and the Apollo space missions of the 1960s, he says, "There was so much promise to science." But then, he adds, "I was waylaid by one course in photography. I started spending all of my time in a dark room."

This is an exhibit that you can take at face value or really get into the weeds with — perhaps calling on the help of Google. Not sure of the definitions of "armillary" or "orrery"? Can't explain the relative contributions of Ptolemy, Copernicus and Galileo? Then you might take the latter path, and say hallelujah for smartphones.

With such assistance, you'll know when you're looking at a model — the shadow of a model — of the solar system. You may be fascinated by the intricacy of the molecular models scientists have used to work out their hunches. The similarities in appearance (at least in these images) between a strand of DNA and a telephone pole with a zillion cable boxes may amaze you. At the root of these mechanistic depictions is the stuff of life.

Even without exposition to flesh out their science-y titles, though, Brennan's works stand on their own as engaging images. Wall text informs you that you're looking at an electron-density map of myoglobin; what your eyes see are dark swirls like tiny tornadoes confined to a box. A model of hydrogen atoms created by physicist Niels Bohr is a captivating study in line: verticals and horizontals, intersected by looping ribbons that, in fact, are orbiting atoms. Derived from a mid-19th-century orrery for eight planets, another photograph clearly depicts a mechanical gizmo on a pedestal, yet its right-angled arms can be perceived as the most elemental human stick figures. Suddenly, it looks like a toy.

Brennan's shadow shots of ornithological specimens line the walls of the BCA Center's west gallery, and they are unmistakably avian. One exception is an image resembling two black blobs — those are flamingoes folded up for storage, the artist says.

The exotic plumage of birds of paradise and something aptly called a resplendent quetzal is admirable, even devoid of color. Yet what may strike viewers in this room is that, in its quest to understand life, science sometimes extinguishes it. That paradox is hauntingly conveyed by the shadow of a tiny green-throated mango, its taxidermied form perched on a stand, a tag dangling from its foot.

"In the history of any science," says Brennan, "you're able to touch on a social history." The photos in this room speak to the often-ruthless human behaviors of collection and displaying.

Curator DJ Hellerman aptly describes the images in "Darkness From Light" like this: "The result is an unexpected sense of beauty that straddles narrative photography and the analytics of science." Viewers may gladly see only richly printed, abstracted images, or they may leave the gallery in deep wonderment about the nature of existence — and its absence.

The original print version of this article was headlined "Shadow World"