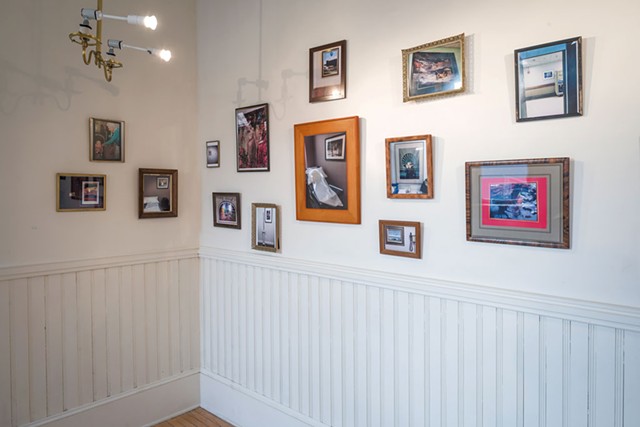 It's lucky that "sick and tired of being sick and tired: how to tell a story of a body and what ails it?" is at Burlington's New City Galerie through January 17, because the exhibit requires more than one visit for full absorption of the experience it offers. That's unusual for a show consisting of six works.

Half are by Vermont native Madeline Veitch, a research, metadata and zine librarian at the State University of New York at New Paltz. The other three are the work of Thatiana Oliveira, associate director of the visual arts program at Vermont College of Fine Arts in Montpelier, where she also lives. The two artists have long interested a third, Sumru Tekin, who also works at VCFA as the exhibition coordinator for visual arts. She stepped into a curator's role to bring them together.

At first, the works seem connected only in that they all appear to concern the body. Gradually, it becomes clear that the exhibit is also about visitors' own bodies in relation to, and in response to, the ideas of these fascinating works.

The first work that visitors encounter is Oliveira's "Suckle," a looped video projected on the wall of the stairway that leads from Church Street to the second-story gallery. In it, three people lean over a table-height surface consisting of baby-bottle nipples sewn together to form a monochromatic yellow mat. In a calm, concentrated manner, each sucks repeatedly on one nipple before moving on to another — a gesture that is simultaneously sexual and infantile.

In the first of two rooms, 15 snapshots in secondhand frames fill a wall and a half; the ensemble forms Veitch's "Untitled (exam rooms)." The photos, devoid of people, show framed art hanging in medical examination rooms, in hospital hallways and beside medical equipment in facilities located in at least four states. 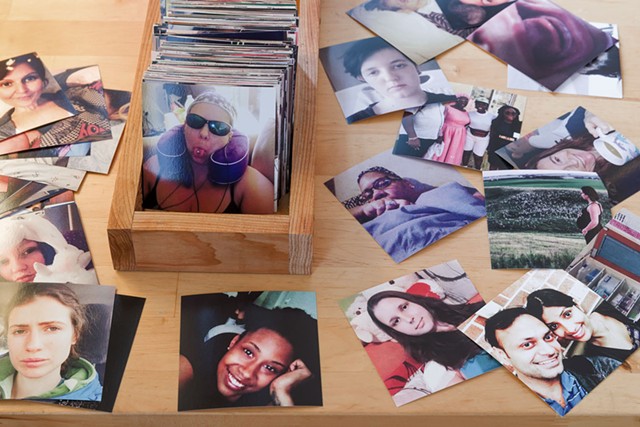 Across the room is Veitch's "#inpain," an installation consisting of a wooden tray containing 900 digital printouts on cardstock of Instagram photos atop a small table that also holds a lamp. Two chairs invite visitors to sit down and flip through the square-format prints of people's faces. Meanwhile, Veitch's voice, in a looped audio installation, reads a list of hashtags, including the work's title.

The second room continues Veitch's work with two slyly humorous digital prints in which the artist reimagines standard pain scales. Such scales ask patients to rate their pain from one to 10, or according to a series of smiley faces that become increasingly frown-y. Veitch's versions link squares of medical graph paper to signifiers of the natural world — images of a rock and a leaf — to suggest the complexity of communicating pain. A tiny green zine the artist created contains quotations from 19th-century writings on pain and illness.

Two more works by Oliveira complete the exhibit. "Untitled (Orange)" is a looped video, shown on a small screen that lies flat on the floor, of two feet slowly rolling an orange between their soles. The model's legs are hairy, with toenails painted a warm pink; the gender ambiguity suggests the universality of bodily pleasure.

When Tekin visited Veitch's studio in May, she noticed that the latter's work was exploring the subject of pain. As a result, Tekin recalls, "I started thinking about the body, its residues, its public and private presentations."

In her curator's statement, she cites Virginia Woolf's famous observation, in "On Being Ill" (1926), that "language runs dry" when "sufferers" try to describe their pain to doctors. Tekin also references Walter Benjamin's lament for the lost art of communicating through stories in his 1936 essay "The Storyteller: Reflections on the Works of Nikolai Leskov." The artist-curator proposes that Veitch and Oliveira have created art that invites new ways of connecting and communicating with others.

Both approach that idea while rooting their work in different concerns. In her video installations, Oliveira is as much interested in pleasure as pain; sensation itself is her subject. She collected the hair in "Sweep" over a year in which she was losing hair for an unknown reason, she says. But while she invites "scientific" examination of the results in her light-table arrangement, Oliveira has also created a thing of beauty in which the curls and clots of each hair sample evoke the curves and complexities of the human body.

"My hope is that there's a visceral experience [for visitors] that makes them consider their own body," says Oliveira by phone. She earned a BFA at the School of the Art Institute of Chicago and an MFA at Columbia College Chicago.

Veitch's "#inpain" offers a similar invitation to connect with others. In a world saturated with selfie images, the artist asks visitors to consider 900 — a mixture of people who are ill in hospital beds and people who want to broadcast their "good days" with happy shots. Veitch could have chosen to present the images in their original digital format, but their materiality requires gallery visitors to handle them physically, a process that's slower and less automatic than scrolling.

"We hardly ever interact with printed snapshots anymore," notes Veitch.

She and Tekin met at the University of Vermont while earning bachelor's degrees in art history. Veitch, who also majored in studio art, went on to earn a BS in library science. That discipline has clearly influenced her work, such as the card-catalog-like tray of images.

Veitch says she grew fond of many of the Instagram images, which she culled from "hundreds of thousands" she considered over a year. "What I'm really touched by is the effort made by the subjects to be seen and understood in their pain," she says. "Whether we can really access that, inundated as we are in the digital landscape, is the question."

That is for the visitor — the term "viewer" being perhaps too limited to the sense of sight for this show — to discover.

The original print version of this article was headlined "Examining Room"