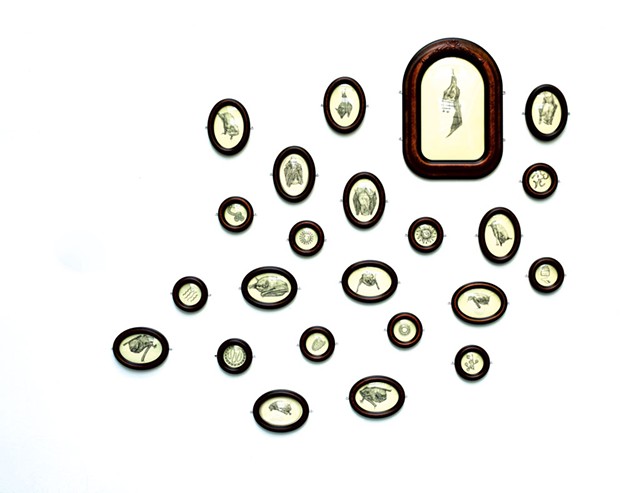 In the time of climate change, the relationship between cause and effect can get murky. One group of absolutists blames humankind for any and all disruptions in the natural world, while another denies any human agency whatsoever. Little space is left for admissions of uncertainty.

Consider the case of the worldwide colony collapse among honeybees. Some scientists suggest that warming temperatures may be responsible, along with a new class of pesticides that makes the pollinators more susceptible to parasitic diseases. Yet, as the New York Times reported last year, "Nobody knows with certainty why honeybee deaths are rising."

The decline in population might have nothing to do with humans' impact on the environment. After all, mass die-offs occurred in the animal kingdom long before Homo sapiens came along, and they could continue long after our species has left the scene. But then again...

Tanya Chaly's poignant display of drawings at Saint Michael's College prompts viewers to contemplate the conundrum of whether humans are causing the mutations she depicts or whether indifferent Mother Nature is, once again, just doing her thing. 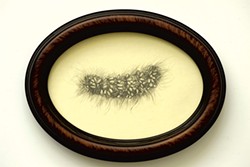 Titled "Complex Contingencies," the show encompasses scores of skillful, straightforward renderings of insects, birds and amphibians. Sheets of various dimensions are accompanied by several hand-size compositions mounted behind glass and enclosed in wooden frames. These smaller, elegantly presented pieces are grouped on two walls of the McCarthy Art Gallery in patterns resembling mechanical illustrations of molecular structures, emphasizing the theme of genetics.

Chaly provides no interpretive commentary in the form of text panels, apart from a brief introductory statement. In it, the New York City-based artist describes the show's contents as a "scientifically assembled display of biodiversity." Chaly adds, matter-of-factly, "The viewer will discover pathologies and disease, parasitic infections and mutations."

She also describes her assemblages of drawings as "forensic suites," a term that suggests the artist is engaged in crime-scene investigations. If so, she isn't revealing the results. And that ambiguity, along with exacting draftsmanship in a tradition that includes Albrecht Dürer and John James Audubon, accounts for the strength of "Complex Contingencies." Chaly doesn't tell viewers what to think — or even what they're seeing. 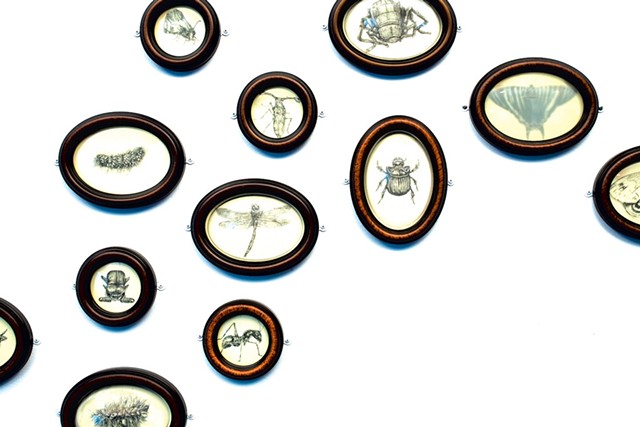 Despite her opening warning of the horrors that await, no obvious maladies or malformations afflict many of the insects depicted here. Maybe an entomologist would see right off what's wrong with these bugs, but untrained eyes probably won't notice anything amiss.

In other pieces, however, mutations are immediately apparent. A section of the show subtitled "The Future Eaters" features a salamander, front toes missing, crawling in pitiable isolation across a white expanse. And something is terribly wrong — tumors, perhaps — with the hindquarters of a spring peeper that's included in another part of the show under the ominous heading "Paradigms and Harbingers." 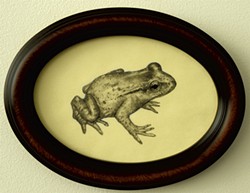 The charcoal, graphite and pastel drawings hung individually in the gallery feature faintly visible puncture marks in sizable or multiple patterns, similar to those seen in Australian Aboriginal art. Chaly was born in Sydney, so she may well be familiar with, and influenced by, such geometric abstractions. The punctures also suggest an invasive presence that attracts little attention as it inflicts its wounds. The titles of some of the drawings identify the ghostly, flowery forms they depict as spores or algal blooms.

Chaly, who was awarded a residency at the Vermont Studio Center in 2013, is the sort of artist who favors the subtle over the blatant. Her art whispers rather than shouts. And while she refrains from tendentious messaging, Chaly is working in a political context — accentuated by the outcome of the presidential election — that will lead many in her audience to assume that human actions, and inactions, are rendering ecosystems dysfunctional.

Anyone alarmed by climate-change denier Donald Trump's accession to the world's most powerful office won't find solace in this show. Which may be a compelling reason to go see it.

The original print version of this article was headlined "Species Interruptus"