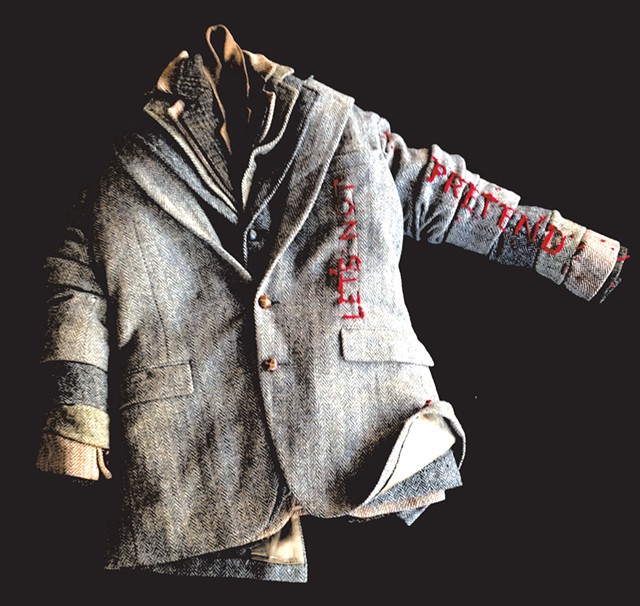 "As humans, we're so damn awkward," says Susan Calza, "[but] we've got this incredible radiance, too." In a recent phone interview, the Montpelier artist shared insights into her current show, "LET'S NOT PRETEND, it's ordinary gold," at Axel's Gallery & Frame Shop in Waterbury. Using gold as a central metaphor, the interdisciplinary artist has crafted a delightfully peculiar, personal installation featuring recent sculpture, drawing, painting and textile-based works. It's a portal into a broad-reaching career guided by enchantment and intuition.

"A lot of the work is about deception," Calza said. The exhibition title is an amalgam of two of its works; "LET'S NOT PRETEND" is a soft sculpture of Harris Tweed jackets the artist found at thrift shops. Having amassed the upscale coats but unable to find wearers, Calza explained, she found herself stuffing them one inside the other.

At the time, she said, she had been thinking about the Penn State (Jerry Sandusky) child sex abuse scandal and the multiple layers humans assemble to cover often-ugly realities. On the left side of the outermost jacket she embroidered the words "Let's not pretend."

In the other work referenced in the exhibit's title, "This is ordinary gold," Calza again uses repurposed materials, but they serve as talismanic accents within a larger installation. Nine walls enclose a small, inaccessible room, visible through three windows.

Calza specifically chose an odd number of sides for the work: "When you open a door, you never do see a flat face," she said. "I didn't want your eye to rest really comfortably. I wanted you to have to shift your eyes to jar your brain a little bit."

Small items adorn the outer walls of the nonagon; Calza selected them to correspond in some way to the wallpaper on the panel's other side. Among the objects are a spinning top and a micrometer, both gilded in gold. The visual conflation suggests not only Calza's elevation of the humble toy and tool, but also her challenge of gold as a human power symbol: "Gold is really ordinary," she said. "It's just a damn mineral."

Calza's penchant for sometimes-cheeky reclamation asserts itself throughout the exhibition, from an oversize ball of wool on a pedestal ("Happy Medium") to the billowing hanging sculpture titled "Mama." Calza made the latter using a 12-foot-long handmade Afghan blanket that she purchased from a thrift store for a dollar — she couldn't leave "her" behind, she said. To give new life to the stereotypically matronly domestic item made from granny squares, Calza threaded strips of golden-yellow paper through the knitted yarn.

Another large sculpture, also made from cast-off textiles, hangs opposite "Mama." Calza created "9000 Is Enough" by tearing her collection of vintage hankies and other white- and cream-colored linens into strips, then knotting them 9,000 times. "All of my work is pretty obsessive," she acknowledged.

However, unlike many artists who express a sense of nostalgia and love for reclaimed objects, Calza seems to reject preciousness. She made "Black Box Dramas," sumi ink drawings that line the gallery walls, using her nondominant hand. "I found I was getting too tight, too controlled," Calza said. "I wanted to get to a deeper emotional, psychological plane with [these drawings]."

Depicting a variety of figures — a baby and its mother, children, floating demon-esque heads — the works have a fluid, fragmented, dreamlike quality.

A deep anxiety that is both political and more intimate underscores this show. In conversation, Calza evidences global awareness, from the exploitation of South African gold miners to air pollution in Beijing. Her "Middle East Series" — tabletop clay sculptures dusted in gold — distinctly mimics homelike structures, referencing the widespread violent destruction of communities across that region. Almost hiding in the gallery's front window is "Gotcha, Election 2016." In it, a vaguely threatening, jack-in-the-box-like figure looms over the doorway of a small, square domicile made of paper.

Calza shows an uncanny knack for transforming acutely political topics into highly personalized manifestations. Nothing is on the nose. There is no moralism, only the self-aware creation of objects that can be both frustrating and friendly. With genuine wonder, Calza has formed a poetic puzzle that invites viewers to navigate human contradictions, consumerism and the confounding question of how we construct beauty and value.

The original print version of this article was headlined "Golden Opportunity"