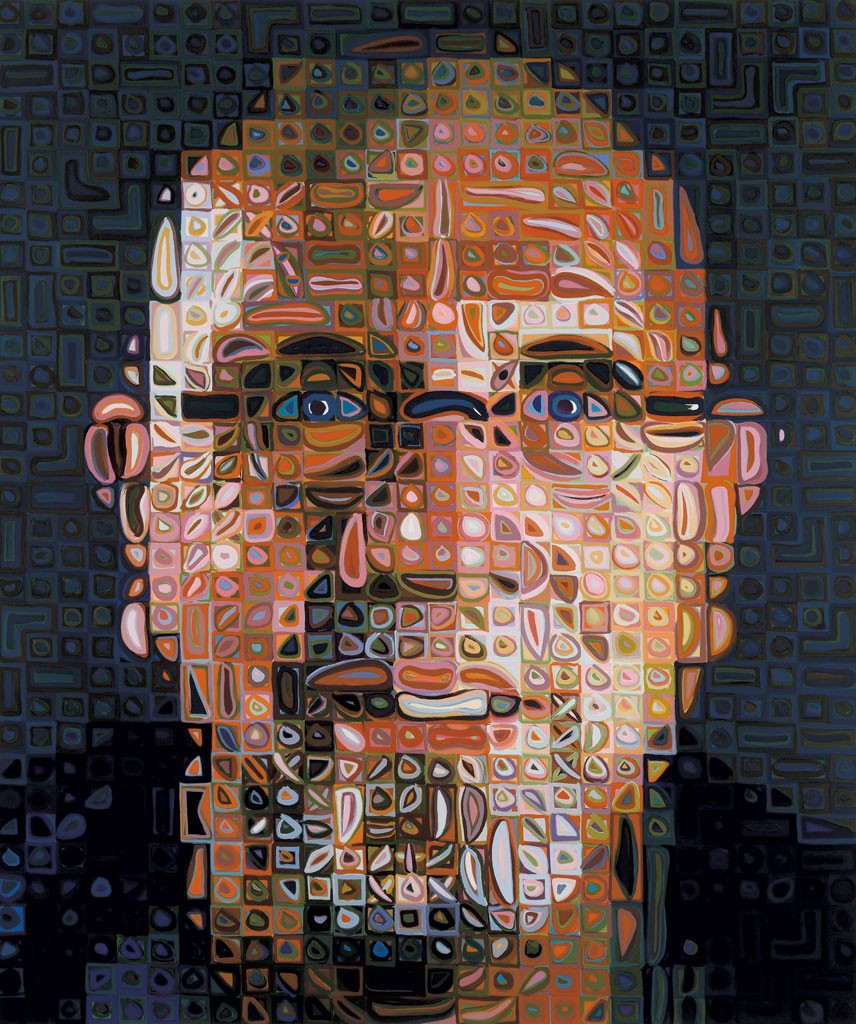 A current exhibit at Dartmouth College's Hood Museum of Art, titled "About Face: Self-Portraiture in Contemporary Art," isn't just a collection of artists' self-portraits. It's also a portrait of the students who participated in the show's curatorial process.

When Hood director Michael Taylor began planning "About Face," he invited students to work with him — as he's done twice before — this time opening it up to Dartmouth's entire student body. In the end, nine students and Taylor explored selected works from the Hood's permanent collection to investigate the relevance of self-portraiture in contemporary art. Each student then chose artworks to research and wrote wall labels for them.

"About Face" presents work by 18 noted contemporary artists, among them Chuck Close, Bruce Nauman, Cindy Sherman, Kiki Smith and Ai Weiwei. Their paintings, photographs, prints and videos push the genre, often upending conventional expectations. These artists toy with their own identities, sometimes transforming themselves through disguises and assumed personae.

"Self-portraiture has been reinvigorated in the age of the selfie," Taylor notes in an interview. In fact, museums around the country are working on similar shows that speak to the moment. "Had you done it 10 years ago, you would have struggled to find relevancy," he adds. "This exhibit underscores how contemporary artists are responding to this moment in history. There's a destabilizing of identity."

Close's "Self Portrait Screenprint" (2012, silkscreen in 246 colors) hangs at the entrance to the exhibit. A much-larger-than-life image, it is visually arresting and prepares viewers to expect the unexpected throughout the exhibit. Taylor himself wrote this wall label, describing the work as "a buoyant sea of mosaic-like color blobs, resembling anything from hot dogs and doughnuts to the pixels that make up digital imagery. When the viewer backs away from the print," he continues, "the glimmering surface coalesces into a cohesive image of the artist's famous visage."

Close has made his life's work the creation of these mammoth heads (more often depicting others than himself), repeatedly posing himself creative challenges in the process. 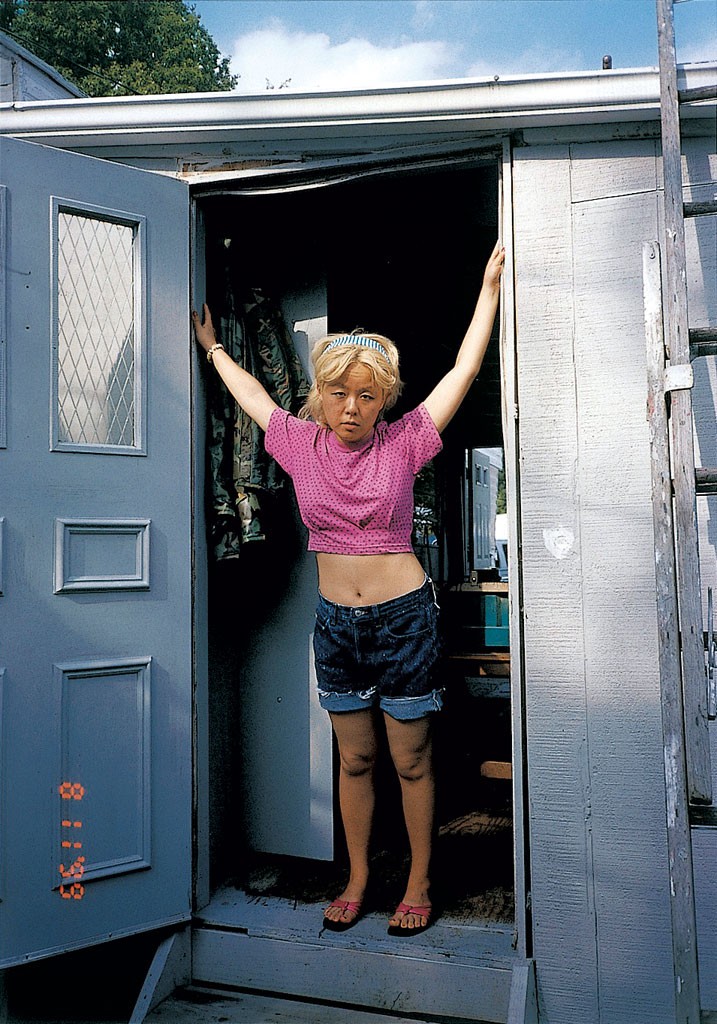 Sherman has made a career of self-portraits. In 1976, when she was 22, her photographs appeared in the month-long "Photo Bus" exhibit on public transit in Buffalo, N.Y. Three of these early pieces are on display at the Hood. Audiences familiar with Sherman's "Untitled Film Stills," or with her large, elaborately staged color photographs, will find them simplicity itself by comparison.

The three 8-by-10-inch black-and-white photos from the "Bus Riders" series depict Sherman appropriating various identities, including that of a bus driver. These anticipated the many fictional characters the artist would adopt in years to come. The rudimentary setup lays bare the artifice — the camera's shutter-release cable is visible — and makes it clear Sherman is not the bus driver or either of the riders she portrays.

Susanna Coffey's 2008 oil on panel "Intake" is approximately the size of an actual head. Yet student Elissa Watters says she imagined it as "bigger than life" when Taylor introduced her to it on screen. When she later encountered the actual painting, its realistic size resonated with her. "It's not idealized, not transcendent," Watters says in an interview. "The face emerges from, and then submerges back into, the grid-like environment." For the painting's wall label, Watters wrote: "Coffey captures the fragility of the modern world where individuals are easily lost in the crowd."

Nikki S. Lee's nearly life-size, full-color, full-body photograph "The Ohio Project (8)" (1999) depicts the artist staring out of the door of a trailer. Students Taylor Payer and Kathryn Conroy wrote that this image "is part of an extended project in which Lee transformed her appearance and immersed herself in a series of American subcultures, including drag queens, senior citizens and yuppies. By performing such a diverse range of characters, the artist dares to ask, 'What makes you yourself?'"

Martín Gutierrez and Wendy Red Star each engage viewers with a series of elaborately constructed photographs. In his 2013 "Real Dolls" series, Gutierrez himself poses as various life-size sex dolls in traditional domestic settings. Dressed in elaborate garb, lacquer and makeup from head to toe, he explores questions of gender, identity and perception while posing, stiff-limbed, in "we aim to please" positions. His photos, equal parts riveting and disturbing, are just one of myriad tools in Gutierrez's artistic arsenal, the latest being music. Along with Red Star and Renée Stout, he will participate in a panel discussion on "Self-Portraiture and the Construction of Identity" on May 7 at the Hood.

In Red Star's saturated color photographs, she places herself in an elaborate Native American tableau, complete with fake wildlife and artificial leaves, clothed in a traditional elks-tooth Crow dress. Red Star describes herself as a cultural archivist who is speaking sincerely about the experience of being a Crow Indian in contemporary society.

Studio art major Laura Dorn was involved in hanging the show. She helped position Jeff Walls' "Double Self-Portrait" (1979) and Rineke Dijkstra's "Self Portrait, Marnixbad, Amsterdam" (1991) in a corner on adjacent walls. The juxtaposition of these two photographs helps us "[look] at what the individual reveals and how much of that is manipulated," she says.

Dorn also cocurated a related exhibit, "About Dartmouth Face," with Jordan Craig; both are curators for the student gallery in the Black Family Visual Arts Center. "We reached out to all the students, asking, 'What is a self-portrait in the age of the selfie?'" Dorn says. Freshman through seniors participated. "Some had drawings of themselves; others were more conceptual — like arranging a jacket on the wall," Dorn says.

She and Craig collected the work, chose about 21 pieces for display, arranged the exhibition and invited all the students to the opening reception. "It was a great way to foster more of a connection between students and the work they're doing and what's on display in the Hood," Dorn says.

"About Face" asks more questions than it answers. The one issue it does resolve? Self-portraiture is alive and well, right alongside the selfie.

"About Face: Self-Portraiture in Contemporary Art," through August 30 at the Hood Museum of Art, Dartmouth College, Hanover, N.H.

The original print version of this article was headlined "Face It"