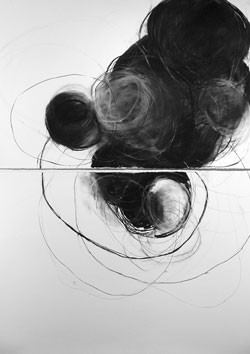 Walk into Stowe’s West Branch Gallery this month, and you’re immediately faced with opposites: the ethereal gesture drawings of Sarah Horne, and the weight and color of Clark Derbes’ sculptures. Yin and yang, soft and hard, subtle and bright, sweeping circles and tight grids, female and male. It’s an appealing juxtaposition in which the two artists’ works complement each other. Individually, their pieces sing; together, they harmonize and pull you in for a closer look.

“They share the question of perception,” suggests Tari Swenson, co-owner of West Branch with her husband, Chris Curtis. “We paired Sarah Horne’s fluid charcoal drawings with Clarke Derbes’ angular, colorful sculptures because they have a spirited conversation with each other.”

Horne, who hails from Stockbridge, Mass., calls her half of this exhibit “Lines in Winter.” Her striking charcoal impressions are inspired by her daily walks around Naumkeag Pond, near her home. Horne says of her work, “The lines and forms I draw communicate these walks. The starkness, decay and fragility of what I see are at once marvelous and alive, then ruinous and dying.”

Indeed, Horne’s drawings express natural beauty, but they don’t do so literally. Her loosely rendered shapes, many circular, are etched with white and black lines crossing and intersecting the orbs. Strategic erasures cause the amorphous gestures to sometimes waft out of focus. Shapes careen off the paper in a puff of smoky gray or black as new forms enter. Horne’s drawings suggest both biology and the cosmos — dust motes and stardust, all at once.

The artist thickly lays down charcoal and graphite, and then removes some, forcing the materials to twist and disappear. But she leaves great swaths of surface untouched. While Horne’s strokes are energetic and visceral, the results are delicate. Her five drawings collectively titled “Marks in Snow” are almost like glass sculptures: transparent yet sharply focused. Hers is a visual grammar for winter’s transience.

“Gesture 1” and “Gesture 2,” hung side by side, resemble dark holes in the ice of a frozen stream. Thin, white, etched lines and bold, black strokes swirl around the black holes like ringlets of light and shadow.

Horne includes in the show four drawings of grasses. In “Grasses 1,” black lines arch up to the left, a towering, unkempt stand of grass bending in the wind. In her artist’s statement she explains, “The tufts of grass that line the pond are uneven, off the edge; jutting and frozen.” All of Horne’s works are framed in white, starkly containing the energy within.

Many of Clark Derbes’ lively sculptures are painted in boisterous, colorful grids that sometimes create optical illusions. One, titled “Angelique,” is a polychromed oblong of poplar with a rectangle cut out of its middle. As you walk around the sculpture, which is mounted on a steel base, it seems to shape-shift.

All of the Burlington artist’s works in this show are named after family members and friends — fitting titles for sculptures that seem to be characters with individual quirks. Derbes describes them this way: “The pieces seem simultaneously primitive and futuristic, which led me to call the series ‘Time Travelers.’ The name also made sense because of the weird, omni-dimensional presence they have.”

Derbes uses a chain saw to cut his wood blocks from ash, poplar, pine and elm. He paints the resulting shapes with gouache, sands them down and then rubs them with notepaper, leaving them with a satiny surface. These works beg to be touched. An example is the freestanding, 11-by-17-by-2-inch “Charles II,” made from carved poplar. Lines of color wrap around the sculpture in varying widths. Each side is an imperfect rectangle, causing the piece to look warped.

A 9-by-66-by-3-inch, wall-hung sculpture titled “Jefferson” casts intriguing, overlapping shadows. One plane of the long, narrow work is primed off-white, in contrast to the bold colors on the other facets. Other large pieces are oiled but left unpainted, perhaps to highlight the grain of the wood, as in “Greg,” made from the last elm to be cut down on the University of Vermont campus. The naked tower, nearly 56 inches tall, is a testament to the beauty of the tree’s interior.

Horne captures the ephemeral nature of winter. Derbes transforms nature into his own personal creatures. Both of the worlds they create, like the show itself, are dynamic and downright beautiful.