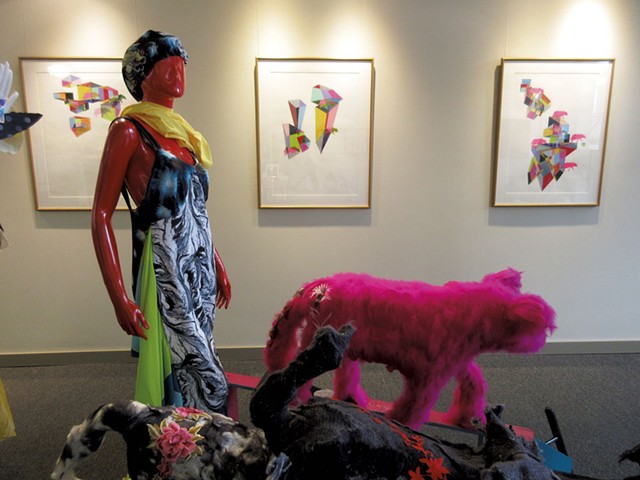 Sam Talbot-Kelly is a mixed-media artist with a special interest in costume and fashion. Her work has appeared locally in Strut, the fashion show of Burlington's South End Art Hop; in pop-ups at the Salaam clothing store in Montpelier; at the Kent Museum in Calais; and at the Brick Box Gallery Installation Window in Rutland, among other venues.

Now the Montpelier artist has installed a singular show at Axel's Gallery & Frame Shop in Waterbury. Whimsical and colorful, the show is an installation of five framed artworks hanging beside a figurative assembly that takes up half the gallery's floor space. Its title is intriguing: "Draft of a New Harmony in a Slip Dress Pocket."

The arrangement of the figures in the installation puts one in mind of a parade: Three female mannequins and four four-legged creatures about the size of small dogs appear to head toward the gallery's door. Led by a perched crow with wings spread, the group makes its way among downed furniture, geometrically cut sheets of colored Plexiglas and small metallic silver pillows.

The installation continues in a front window display with Talbot-Kelly's wood-panel pattern paintings, adorned with chains and other gold-colored hardware, arranged on furniture.

For those not up on women's fashion, a slip dress is a silky sheath that's not much more elaborate than the undergarment it's named for; it rarely has pockets. Talbot-Kelly did not add any to the provisional-looking mannequin outfits she created, either. (Only one is a dress, a redesign of a 1930s pattern; the other two are similar to jumpsuits.) Instead, a pastiche of other adornments appears: Scarf-like panels drape from side seams like inactivated wings; necks are wrapped in bunched yellow T-shirts; heads are draped with gold chains.

The "new harmony," according to an information panel, is between humans and nature. Talbot-Kelly cites the poet and philosopher Ralph Waldo Emerson as her inspiration. The artist, however, seems far more playful than the transcendentalist, who wrote in the 1830s of the inherent spiritual goodness of both humans and nature. Talbot-Kelly's "draft" is rendered in an unnatural riot of colors and materials, among them plastic mannequins (one is red), hot-pink feathers and white faux fur.

The colors repeat from wall to mannequins to imagined creatures. The framed paintings on the wall feature 3D geometric shapes floating on white backgrounds. The shapes, some impossibly complicated or overlapping, are outlined in black pen and colored in the same yellows, hot pinks and other hues as the mannequins' clothing and the creatures' pelts. One organic form — the silhouette of a hybrid creature — stalks through each of the paintings.

Similarly, the large appliqué bees on one mannequin's head covering and the felted-wool wrap worn by another reappear in the felted-wool "hides" of some of the creatures in the assembly, which are adorned with appliqué flowers. And the colored parallelograms and other geometric shapes of the paintings are echoed in the Plexiglas shapes placed amid the broken chair, prone stool and two ladders on the floor. There is a unity to the installation — but to what purpose?

At first glance, the work seems to reference women's marches of recent years. One slip-dress-clad mannequin stands with arms outstretched, like a crossing guard stopping traffic, with a message taped to one upraised hand: "Join Now."

The information panel suggests that such thoughts aren't entirely out of order. "In a sense, cloth and the body are my political weapons for transformation," Talbot-Kelly is quoted as saying.

In an email, the artist further explained that her intention was to "create a sense of belonging to something greater than our egos, [to] create a space that allows identities to be specific while connected to something larger."

That gesture toward "something larger" could account for the diversity of her approach, which encompasses costumes, set design, painting, wood-panel design and found objects in this show alone. (Other installations have included robotic elements, such as a work involving the human heart that she showed at the 2013 Florence Biennale.)

The artist's wide-ranging education is apparent here. Talbot-Kelly, 50, grew up in Toronto after her family emigrated from Great Britain when she was a baby. She studied sculpture and fiber arts for her bachelor's degree in fine art from Concordia University in Montréal. For a master's, completed at the University of Texas at San Antonio, she focused on painting and performance, including installation. Most recently, Talbot-Kelly studied costume design at the Fashion Institute of Technology in New York City.

"I've always been between disciplines," she said by phone. Her influences range from the contemporary German mixed-media installation artist Isa Genzken to fashion designers such as Alexander McQueen to cubism to sartorial-cultural readings of the 1930s, she added by email.

The artist can clearly juggle many interests at once. At some point, however, the work must stand by itself and communicate some sensibility or emotion. "Draft of a New Harmony" confuses in that regard: Does its apparent celebration of artificiality undermine its stated intent to establish a new harmony with nature? Is its gesture toward women's strength at odds with its light, fun tone? Whether the work succeeds depends largely on the viewer's response to such a multifarious vision of harmony.

The original print version of this article was headlined "Ready to Wear | "Draft of a New Harmony in a Slip Dress Pocket: An Installation by Sam Talbot-Kelly," Axel's Gallery & Frame Shop"