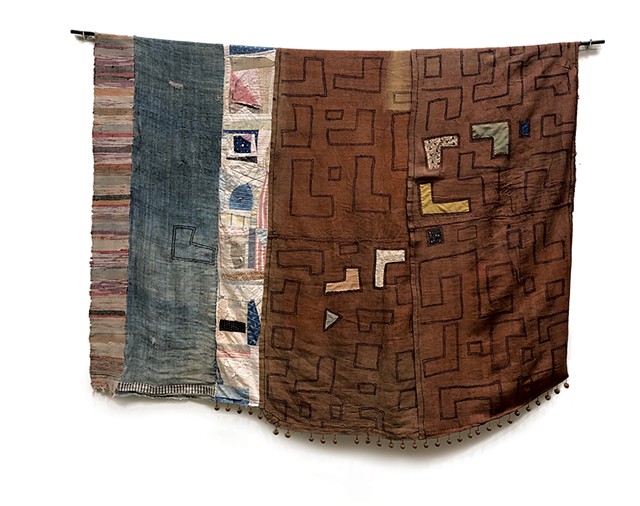 Janie Cohen has served so long at the helm of the Fleming Museum of Art in Burlington — as chief curator from 1991 to 2002 and as director since then — that her identity as an artist may still be news to many. She first showed her hand-stitched cloth work in a duo exhibition at the Amy E. Tarrant Gallery in Burlington in 2016 and has participated in three group shows since.

"Rogue Cloth Work," now at the Supreme Court Gallery in Montpelier, is Cohen's first solo show. Given that she recently acquired a dedicated studio space at the Vaults in Burlington — a step up from her home studio — there may be more exhibitions to come.

Cohen's deft assemblages, using only reversible, hand-sewn interventions, treat the materials with enormous respect for their former lives. "I want these amazing and gorgeous fabrics to be seen and appreciated," she explains.

Yet the fabrics she used in the 13 works on display aren't show stoppers in the expected sense. They are worn and faded, the relics of everyday usage and care — usually at the hands of women.

"I tend to go for old cloth that has visible history to it," Cohen says, though she also incorporates new fabrics, including printed hand towels by Laura Wiles and contemporary tie-dye by Deb Lacativa. "My palette is this huge stash of cloth I've collected over 35 years."

"Strata" uses a representative sample of Cohen's wide range of materials: a 19th-century Japanese kimono, a piece of Chinese silk, a French tassel, vintage and contemporary American fabrics, paint-spattered khakis, and vintage thread. The work consists of three unevenly faded brownish vertical kimono panels; the left-most one is longer and folded so that it hangs half hidden behind the center panel.

Sewn to this dark backdrop are three main elements that give the work a compositional balance: a vertical stack of small, colorful fabric samples framed by a rectangular border; a white square of crochet work; and a white tassel.

The strata captured here in fabric could as well represent layers of time and geography. With her own barely discernible horizontal lines stitched in red, green or white vintage thread, extending from either side of the tall rectangle, Cohen seems to be joining her work with that of the many weavers and sewers embodied in the fabrics' histories. This act of joining is the physical equivalent of painters' abstract formal gesturing to past styles and artists.

The exhibition could have benefitted from more detailed labels. True to her training as a curator, Cohen has learned as much as possible about the histories of her fabrics. At the exhibition's opening, for example, she said that the rust-red 20th-century Kuba cloth from the Democratic Republic of the Congo used in "To Wrap Our Love" is traditionally woven by men and embroidered by women. But the label only identifies the fabric; it doesn't explain why it interested the artist.

In a separate conversation by phone, Cohen said that she confined her labels to lists of materials because, for the show, "I had more of an artist's hat on than my museum hat. Which is interesting, because I'm all about interpretive materials" at the museum, she adds.

She directs viewers to her website to learn more. Her online text for "To Wrap Our Love," for example, indicates that the work's unifying factor is that all the fabrics were handwoven or handmade, including Japanese mosquito netting woven from hemp, and used to "clothe or protect loved ones."

Cohen added during the phone call that the pattern of thread-outlined geometric shapes on the Kuba cloth is original to the fabric and sewn with an unusual stacked stitch. The echoing geometric L shape, stitched onto the mosquito netting in an identical manner, is Cohen's own work — an undertaking that, she said, helped her appreciate the materiality of the Central African cloth in a new way. In general, however, Cohen's subtle interventions are meant to make it impossible to determine who did what.

For the latter, Cohen pushed the curtain into gathers on one side to partly hide a stitched botanical detail she had added as an echo of a cut-out printed form beside it.

A similarly teasing quality infuses "Terminus," a black-and-white assemblage of layered, differently sized pieces. The work is one of a few that use only contemporary fabrics, including an embroidered-text piece and shibori-dyed denim by Massachusetts artists Yasmin Arshad and Rachel Switzer, respectively. While the embroidered text's crude letters spell out "The End" 12 times, the work is hung from the shaft of a headless arrow whose fletching indicates that it points left, leading the eye in the opposite direction from that in which English is read.

Assuredly, there is no clear end — either here or in the other embodied histories that constitute Cohen's unique work. For the artist, her work is an antidote to the times. As she writes in her artist statement, "In a time of ... lessening heed to history, the stitching needle helps me to examine, honor, and remember."