The place of modern-realist portraiture in contemporary art is generally considered neither major nor radical. But the 25 portraits of women that comprise the exhibit "Reclamation" at Helen Day Art Center in Stowe are arguably both. The show's importance lies at the nexus of the paintings' authorship, content and historical moment.

Female artists painted all of these works. In the era of #MeToo and Time's Up, movements that address violence against women and inequality in the workplace, a show featuring solely women artists helps right a persistent imbalance in the art world.

According to studies cited by the National Museum of Women in the Arts, work by women makes up only 3 to 5 percent of the collections in major museums and galleries in the U.S. and Europe. Meanwhile, 51 percent of practicing artists today are women.

Statistics aside, the combined visual effect of the paintings in "Reclamation" is powerful. About half the subjects contemplate the viewer directly, with expressions ranging from sanguine to fearful to confrontational. Their bodies, dressed or nude, conform to no particular image of beauty; they are far from Renoir's soft-cheeked paragons of motherhood or Klimt's jewel-like allegories of femininity. Nevertheless, they radiate beauty through emotionally vivid, arresting poses and expressions.

"Reclamation" is one of several artist-driven attempts in recent decades to redress the disparity between female artists' output and their low level of institutional inclusion. These efforts range from the feminist activist collective Guerrilla Girls (formed in 1985) to the blog Women Painting Women, which began promoting overlooked female figurative painters in 2009. 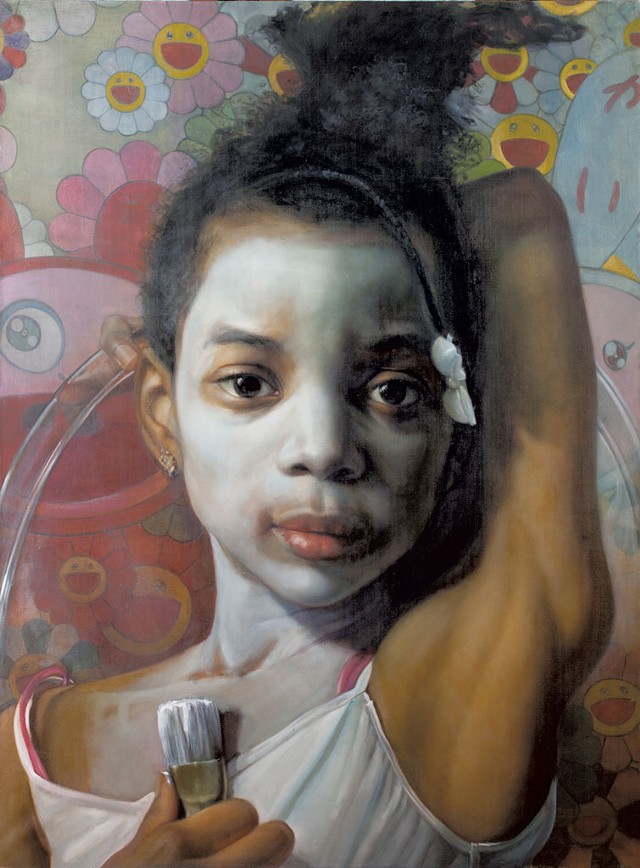 "Reclamation" differs from the typical WPW show, says Moore, in its focus on representations of women. In encompassing a variety of bodies, attitudes and emotional states, it celebrates diversity while also granting the female-imagined female figure "a voice within the history of art and in contemporary art." The exhibit is an intervention in what Burns describes in a brochure as the centuries-long tradition in Western art of woman as a "passive and sensual" muse for the male artist.

The show's largest challenge to that artistic convention, at 94 by 76 inches, is Aleah Chapin's "And We Were Birds." In it, two nude women, perhaps in their sixties, stand back to back with arms linked, one supporting the weight of the other. They appear in a flat landscape whose horizon line, where it meets a pale sky, tilts right — the same direction in which the pair leans. Three other women's legs are visible in the right lower corner, where they appear to be watching from the ground. The standing women smile serenely; the sense of celebration is almost palpable.

What is there to celebrate? Their white, roseate bodies are aged and used: Breasts and stomachs sag, wrinkles abound. But their figures also hint at long, rich life stories, childbearing among them; their skin has a luminous depth, somehow conveying warmth through paint.

Margaret Bowland's 74-by-54-inch "The Artist" dominates an adjacent wall. Bowland is controversial for her decision, as a white artist, to paint mainly African American models in whiteface. She has explained it as a metaphor for society's attempts to efface people's identities and project preferred ones onto them. Here Bowland's somber subject, a black girl set against a background of cheerful Japanese drawings, complicates even this narrative: She holds the white-paint-tipped brush. Is she complicit in her own identity's obliteration? Even if so, the girl's agency, direct gaze and beauty establish her as a complete and confident individual.

No less assertive is the gaze of Ellen Cooper's older, well-dressed female subject, depicted in full length in "Defiance of Erebus." Her tight-lipped, determined expression hints at a woman who won't go gently into Hades. Her black umbrella and the setting, a wet city sidewalk bordered by an iron fence, recall a Parisian scene by Gustave Caillebotte. Cooper's technique in this 36-by-62-inch work is remarkable: The fall leaves littering the sidewalk are painted in impressionist red and gold daubs, while the detail in the woman's fur-lined coat and expensive silk scarf is worthy of a Renaissance portrait. 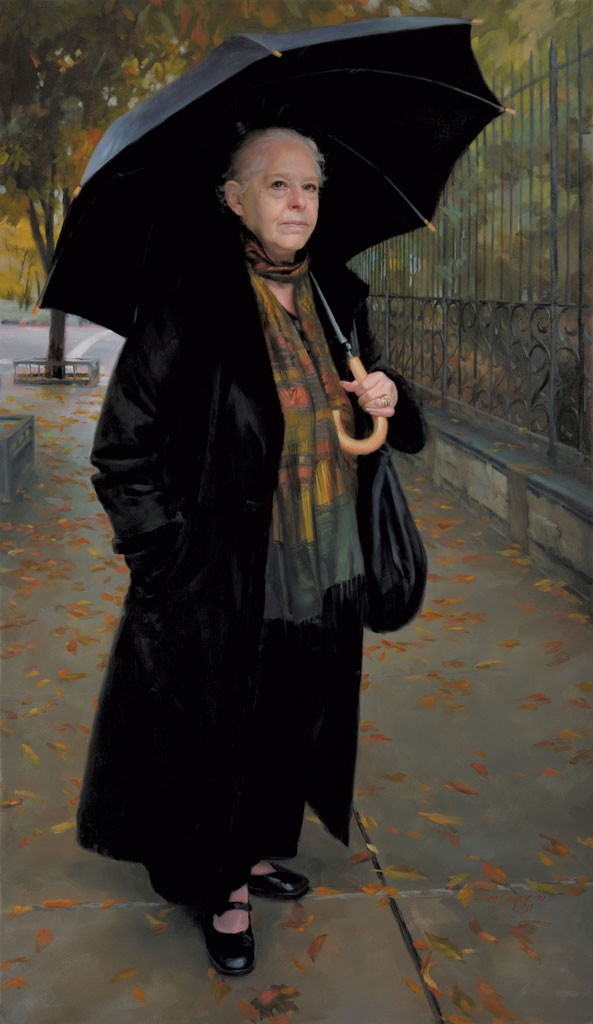 Technique is notable throughout "Reclamation," but Lee Price achieves near photorealism in "Self-Portrait With Raspberry Sorbet." The painting is part of her "Women and Food" series, an exploration of compulsive eating that arose from her own childhood eating disorder. Instead of hiding the compulsion, the subject devours her sorbet with eyes trained on the viewer. Her dress and the background match the color of the sorbet, creating a picture of defiant indulgence.

Perhaps the most powerful gaze is the one viewers don't see, in Sylvia Maier's "Sybrina Fulton, Mother of Trayvon Martin." Facing the viewer with her eyes closed and a lighted candle in her hands, the subject communicates strength and despair at once. Maier's painting is part of a series featuring women who lost young black sons to senseless gun violence.

"Reclamation" includes two prints by Alice Neel, the show's only non-contemporary artist — and one who has wielded an outsize influence on female figurative portraiture. Neel's daughter-in-law, Ginny Neel, is a local who has supported the Helen Day since its inception. She loaned the 1976 serigraph "Ginny" — a seated portrait of herself — and donated the 1982 lithograph "Nancy and Olivia" to a raffle fundraiser for the center. In the latter, motherhood appears to be something of a shock to Nancy, whose eyes are wide and startled as she cradles her equally wide-eyed baby.

In a 2014 interview for the Huffington Post, Bowland commented about figurative realism, "I have been told by current artists that the very way that I paint marks me as unsophisticated, backward. One can paint the figure now, but only in a somewhat careless way, or in a cartoon-like format." That is to say, with irony.

Yet the style seems the perfect vehicle for an exhibit about "reclamation." The word is only part of this show's description; it goes on to include a phonetic transcription and two definitions: "the process of claiming something back or of reasserting a right" and "rescuing from error or returning to a rightful course." The clarity of these paintings, the unabashed realism of their subjects, only increases the impact of an exhibit that asserts the power of women — on both sides of the canvas.

The original print version of this article was headlined "Women's Work"