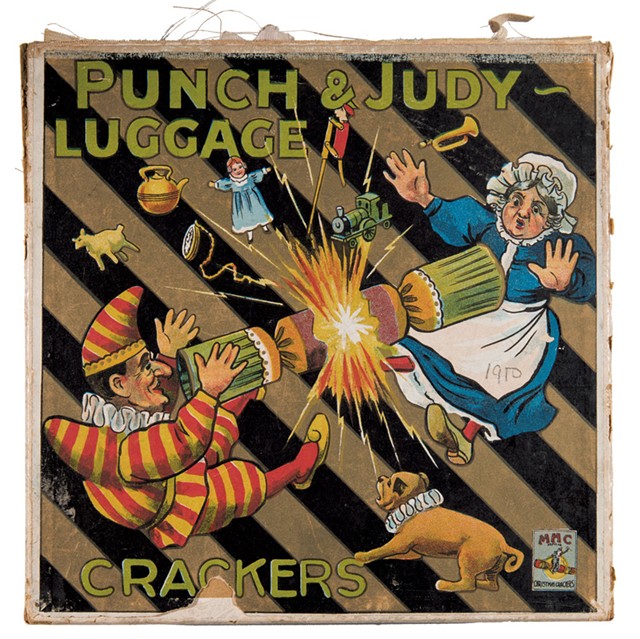 The puppet can be an old sock pulled over a hand, an intricate kinetic sculpture or a piece of paper throwing its shadow on a wall. Utilitarian to their core, puppets are meant to be used, often in service of telling populist stories, be they fairy tale or political allegory. Puppets sit squarely between material and metaphor as the most enduring manifestation of the human need to narrate.

Any attempt to address puppets at large is necessarily ambitious, and this is the task set out by "Puppets: World on a String," the current exhibition at Shelburne Museum's Pizzagalli Center for Art and Education. Curated by Carolyn Bauer, the show cuts a meandering path through puppetry, from 19th-century museum holdings to Andy Warhol's dalliances with 1950s TV character Howdy Doody to contemporary artists' work with shadows. Video and installation works, photographs and archival materials appear here, as well.

Two marionettes and one drawing by Frank Ballard welcome visitors in the gallery's foyer. Ballard, exhibition text explains, was a seminal force in serious American puppetry. In 1956, he successfully established the first degree-granting puppetry program at the University of Connecticut.

Made for a 1980s production of The Magic Flute, Ballard's marionettes are tall, fine-featured characters. They look like svelte actors in miniature, down to their elaborate period costumes. Prince Tamino's worn control bar hints at the skilled labor required to make him come to life.

Ballard's sketch for the opera's "Queen of the Night" aria pictures the enchantress with a wide, deep-purple dress. The outer layers of the skirt pull back like theater curtains, welcoming audiences to the queen's fantastical realm. The exhibition design of "Puppets" mimics Ballard's self-referential concept: A purple stage curtain frames the gallery's secondary entrance, beckoning viewers inward.

For coherence, the exhibition is divided into three themes: "Otherworldly: Fairytales and Fantasy," "Behind the Curtain: Everyday Life" and "Dancing Shadows, Moving Silhouettes." These divisions can seem arbitrary, but in fairness it's challenging to definitively assign puppets to a particular sphere.

Categorized in "Otherworldly," for example, are well-worn cloth and wood Punch and Judy puppets from the late 1800s and early 1900s. Exhibition text suggests that "the world's most iconic puppet duo" provided viewers with an escape from accountability, allowing them to cheer for Punch's depraved and violent behavior. Fantasy? Sure — but not that removed from real-world poverty, crime and violence.

Punch and Judy's brand of "escapism" is a far cry from that offered by midcentury Connecticut puppeteers Margo and Rufus Rose, or by Vermonter Sarah Frechette. The Roses are best known for their work with the "The Howdy Doody Show," but the four '50s-era puppets on view have their origins in fairy tales. "Woody/Hoppy the Grasshopper" from "The Ant and the Grasshopper" features a particularly ingenious design: The marionette's arms double as a working violin.

A vignette of creations by Georgia, Vt., artist and puppeteer Frechette complements the Roses' excursions into fairy tale. This scene features characters and sets from Frechette's 2014 production "What the Moon Saw," an adaptation of several Hans Christian Andersen stories. Frechette's craft is intricate, her anthropomorphic characters adorable.

The exhibition's "Everyday Life" segment nods to a few vastly different arenas. On loan from the Andy Warhol Museum in Pittsburgh are two facsimiles of the late artist's Polaroid snapshots of Howdy Doody, several photographs of Warhol with a hand puppet, and limited-edition Richard Nixon and Spiro Agnew hand puppets from Warhol's personal collection, designed in 1970 by Rick Meyerowitz. 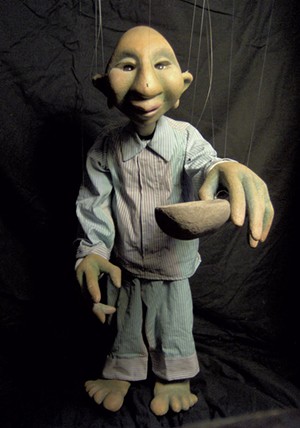 The puppets of a former president and vice president of the United States are the closest this exhibition gets to addressing the use of puppets for direct-target satire of politicians. Also included is a Vanity Fair cover from March 1935 titled "Labor Rights," which depicts then-president Franklin Delano Roosevelt as a puppet master. Evidently, the decision was made not to wade into contemporary currents.

More broadly critical in scope is the stunning installation of Bread and Puppet Theater's "The Possibilitarian Door," a towering display of painted cardboard that represents both history and utopian possibility. It dominates the exhibition space at the gallery's far end, with larger-than-life papier-mâché puppets framed by a loose historical narrative of capitalism.

Another Vermont puppet company, Sandglass Theater, is also represented. On view is "The Ballad of the Ice Shanty." The sweet tabletop vignettes of wood, cloth, cardboard and paint depict Vermonters' beloved winter pastime.

Some of the exhibition's most profound and provocative works are filed under "Dancing Shadows," a category relating to both shadow puppetry and puppets' infiltration of television.

The 2003 video "Puppet Conference," directed by Christian Jankowski for Pittsburgh's Carnegie Museum of Art, features a puppet panel on "Puppets in the Media." Pop-cultural favorites from "Sesame Street" and other shows convene to make giggle-inducing puns, as well as deep reflections on the medium. The beloved blue Grover, for example, confesses he doesn't actually know what a puppet is.

The video, which refers to Muppets creator Jim Henson by name, stands across from a vitrine of several puppets designed by him and his wife, Jane Henson. These include Featherstone and Roosevelt Franklin, the latter being one of the first Muppets to represent a person of color.

Two works in the exhibition are particular standouts: the 1992 "Plaid Doll" by New York installation artist Tony Oursler; and Portland, Ore.-based artist Laura Heit's 2014 "Two Ways Down." The former uses simple technologies to bring a plain plaid doll to life by projecting an actor's face onto the doll's. The face grimaces and groans, screams and sighs, often looking at the camera and appearing to make a direct connection with the viewer. The effect is uncanny and unsettling, brilliant and simple.

Heit's installation in a gallery alcove similarly uses rudimentary technologies to mesmerizing effect. "Two Ways Down" is an arrangement of small, elementary paper cutouts — a human figure, a ladder, flame, a house — on spinning platforms. Light and mirrors project the moving apparitions onto the gallery wall, creating an engaging meditation on life and chaos.

"Puppets: World on a String" appears a bit random and perhaps a bit sparse, but it hardly matters. The complexity of the medium and its democratic appeal come through, if in measured tones. So, too, does one of puppetry's central tenets: humans' infinite ability to construct worlds of possibility.