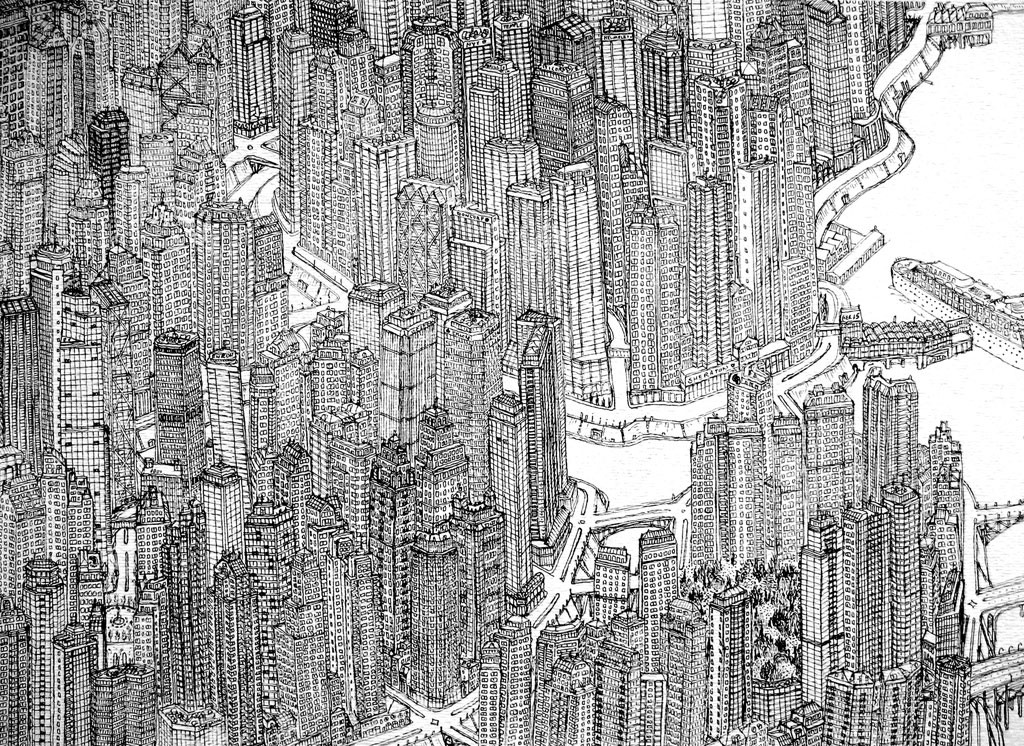 There's no devil in the details that abound in "Preoccupied," a show at the BCA Center's Vermont Metro Gallery. Instead, there's beauty and bedazzlement in the 40 works by four artists who share an affinity for intricacy.

Attention to detail is so fastidious in some of the pieces on display that they bear the hallmarks of obsession. "Preoccupied" may be putting it mildly in regard to the ink drawings by Xavier Donnelly and the fabric collages by Dianne Shullenberger. Adrienne Ginter's hand-cut paper compositions also reflect a meticulous, time-consuming work method. Wylie Sofia Garcia's swirling arrays of dots, stripes and curlicues were made by a hand that appears to be simultaneously freewheeling and exacting.

Donnelly, a clearly precocious 22-year-old, exhibits the sensibility and style of a medieval miniaturist. His densely detailed drawings of cityscapes must have taken many, many hours to complete. A few of his pieces consist of thousands of individual buildings packed tightly together, with roads and rivers providing streaks of visual relief from the intense figuration. Both realistic and fanciful, these drawings were executed as though the artist were hovering high above the scene, perhaps in a blimp anchored in the sky. 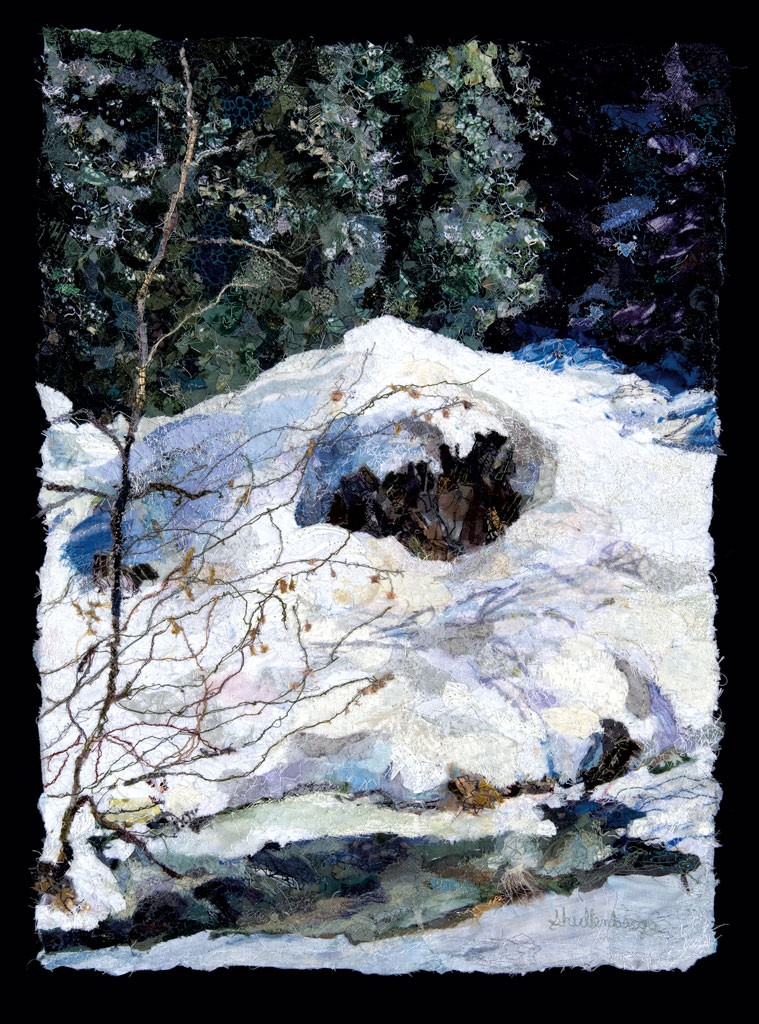 Palm trees line the streets of a few of Donnelly's cities. Those may be a byproduct of the Burlington-raised artist's current residence in Lebanon, where he's interning at the Beirut Art Center.

Donnelly also has a predilection for classical architecture. It appears most clearly in "Façade," a grouping of freestanding false fronts; and in a trio of etchings of ancient structures. He likewise pays homage to noble building in "Small City," which, despite its title, appears to depict a part of Paris, with its characteristic mansard roofs.

The snowy landscapes that Shullenberger conjures out of layered, finely stitched fabric fragments reveal a technique no less rigorous than Donnelly's. The Jericho-based artist's depictions protrude slightly from the center of larger, framed surfaces — an effect that isolates the image and subtly induces viewers to scrutinize it closely. They'll be impressed by the way Shullenberger arranges bits of materials to produce familiar pastoral scenes.

"Broken Pine at Big Manistee," the name of a river in Michigan where Shullenberger summers, is too pretty in that gauzy, impressionist style that has become common among Vermont artists. "Trapped" is far sharper and more appealing in its representation of a pair of trees that list leftward in a presumably wicked wind. Shullenberger excels at conveying the wavy shapes of shadows, as in "Red Ossiers." The small willows' delicate branches are repeated in thinner, darker forms etched into a snow bank. 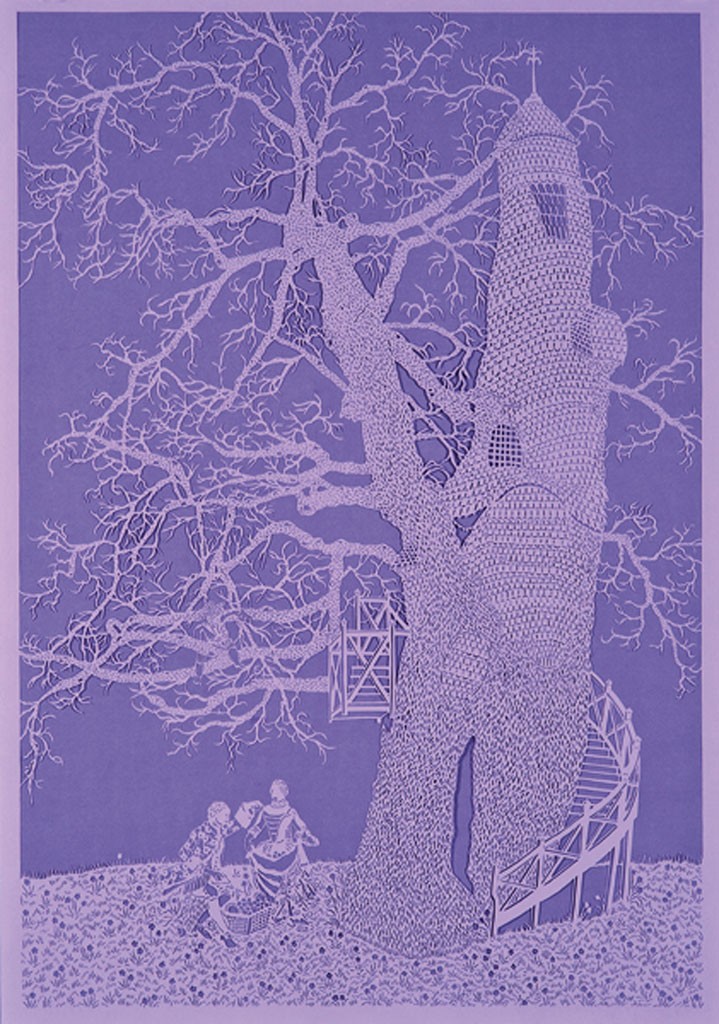 One of the virtues of the Vermont Metro Gallery is its geographic inclusiveness. Were it not for this venue, Burlington-area audiences might never get to see works by southern Vermont artists such as Ginter. And they'd be missing a lot.

"I work to incorporate an extreme amount of detail to tell not only the macro, but the micro stories in a scene," Ginter explains in an artist statement on the BCA website. "This gives the viewer a greater sense of depth, not only visually but narratively."

Exactly so. The Brattleboro-based artist deploys her hand-cut paper in receding layers that also make use of color gradations to heighten perspective. In "Snake in the Garden," for example, Ginter places a thick entanglement of yellowish fronds in the foreground, pale-green budded plants in the middle distance, and a still-paler array of flowers and birds against a black backdrop. A snake coils around a tree limb, dangerously close to an unattended nest of eggs.

Trained as a painter, Ginter deftly varies her palette of cut papers, producing in "Harmony-Blue" a twilit scene of distant mountains and closer-up bare trees that cast riotous reflections on what appears to be a pond. Among two quartets of smaller pieces — one set done in dark shades, the other in mostly primary colors — the highlight is "Red Sea Fan." In this depiction of coral, medium perfectly matches image. 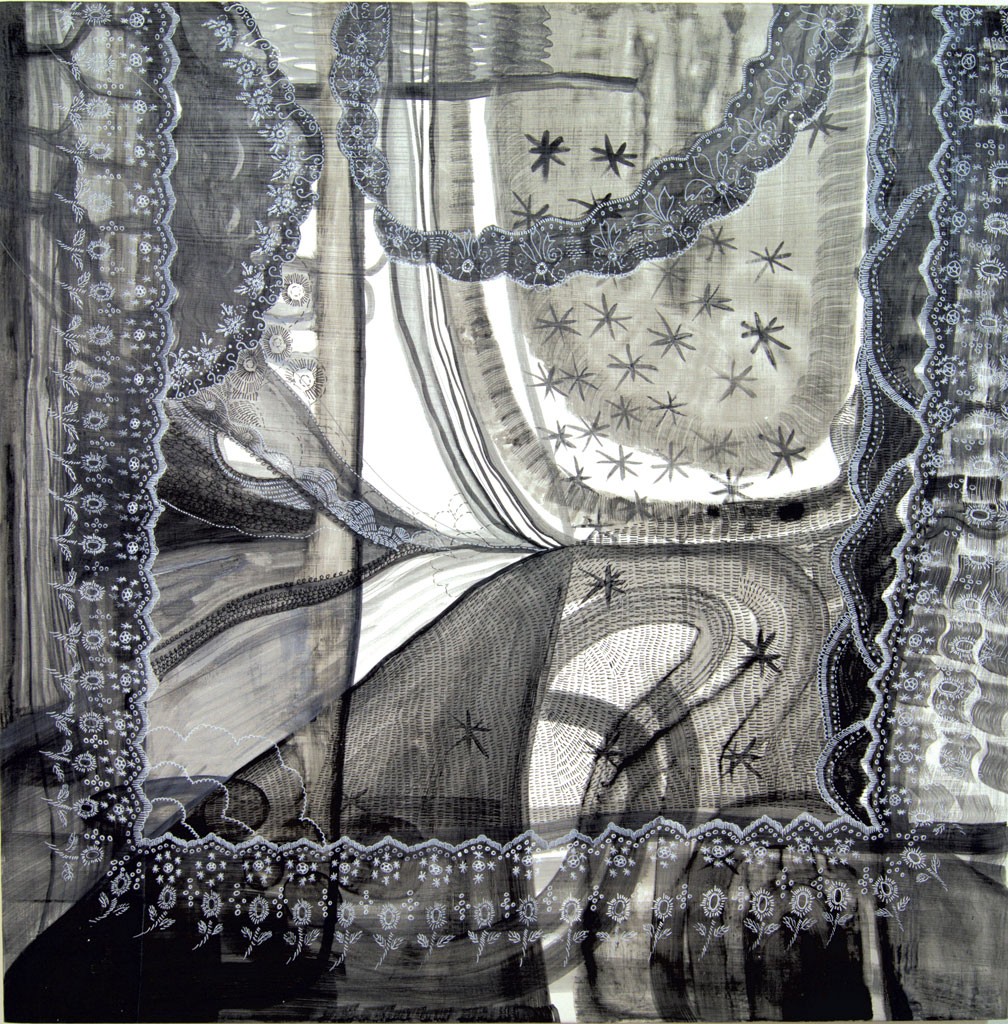 "Spring," however, rates as Ginter's biggest attraction, both in size and visual bravado. This study in violet and mauve is dominated by a tree that seems connected to a castle turret, accessible by a winding staircase. Alongside this odd combination, a dandy and damsel do a genteel jig. There's a strong hint here of New York art star Kara Walker's silhouetted forms, which are also fashioned from cut paper. But Ginter isn't imitating anyone in her charming pieces in "Preoccupied."

Garcia's ink-acrylic-and-graphite abstractions, by contrast, owe a heavy debt to Australian aboriginal art, which often employs patterns and shapes similar to those in the work of this Burlington artist, who grew up in Texas. Also like many aboriginal artists, Garcia uses carved wood panels as the surface for some compositions. Her palette of gray, brown and white is, however, much more subdued than the vivid color choices of contemporary aboriginal artists.

That is not to say that these pieces by Garcia, who has previously focused on installation, fabric-based and performance art, are derivative. With plenty of aesthetic merit, Garcia's work succeeds on its own terms, as does the entire show. It's a visually rich reward for all who venture to the BCA Center's fourth floor.

The original print version of this article was headlined "Carefully Constructed"