Decades before the French gifted America with the Statue of Liberty, the human-powered machinations of "manifest destiny" were at work claiming land where certain people could feel free. Newly opened at the Shelburne Museum's Pizzagalli Center for Art and Education, "Playing Cowboy" examines a fundamental cog in that violent apparatus: the myths of cowboys and Indians, and the material culture that supported them.

Consisting of artworks and decorative objects, including lithographs, paintings and bronze sculpture, the exhibition is drawn mainly from the museum's vast collection. And it carries an inherent charge of which museum director Tom Denenberg and curator Kory Rogers are keenly aware.

"'Playing Cowboy' reckons with some of the foundational narratives of our country, posing questions about race, ethnicity and the doctrine of manifest destiny, with uncomfortable answers," Denenberg wrote in a print brochure.

How does that reckoning happen? The exhibition's critical tactics are twofold. 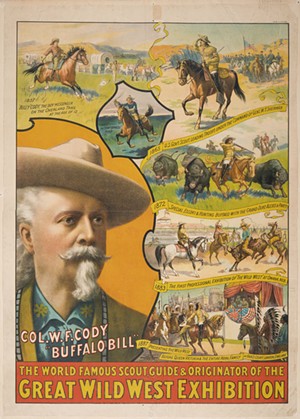 First, as the title suggests, the show works to highlight the performative elements of the cowboy phenomenon, making connections to both circus and cinema — the foundations of American spectacle capitalism. As Rogers said of "Wild West" shows during a curator's tour, they "[looked] like a circus, [traveled] like a circus, [were] organized internally like a circus."

Second, Rogers relies heavily on exhibition text to provide contextualizing details and significant historical corrections. From 1865 to 1895, an introduction explains, approximately 50,000 cowboys worked to shuttle cattle from Texas to the rail lines in Kansas. "Nearly one in three cowboys was African American or Mexican," it reads, "and very few of them actually carried pistols slung around their waists."

But who would know, looking at what's on view? Some dozen full-color lithographic posters for elaborate "Wild West" shows and entertainment spin-offs advertise pared-down stories in which white men are invariably the heroes, whether on horseback or saving a drowning girl from a rushing river. Several of these posters feature William "Buffalo Bill" Cody, the former scout and "Indian fighter" who played himself in the first-ever "Wild West" show in 1883 in Nebraska. 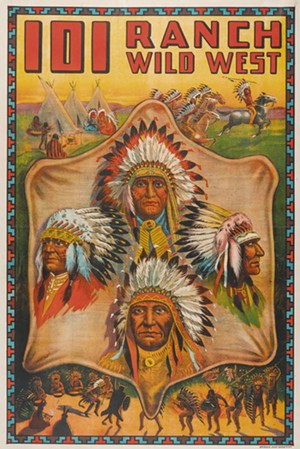 One poster in particular drives home an important point: Just as the individualist male cowboy was a potent, attractive symbol for a burgeoning nation, the image of the Native American was one of fascination and intrigue. In the early 20th-century ad for "101 Ranch Wild West," four stern Native men, coded with headdresses, take up nearly the entire poster.

Beyond entertainment, plenty of other industries used stereotypes of Native Americans to turn a profit. In the exhibition, five "cigar store Indians" indicate the link between Native Americans and tobacco. Often life-size, these wooden carvings were used to draw the customer's eye.

Apparently they succeeded: The first work of folk art that museum founder Electra Havemeyer Webb ever purchased was a cigar store Indian. Some consider "tobacconist sign" to be a more PC — if less descriptive — term for these carvings.

Medicines and tonics also were sold under the guise of a bogus connection to Native Americans. A glass vitrine displays bottles and glassware, including Kickapoo Indian Medicine Company's "Sagwa tonic." "Indian medicines like Sagwa offered white males a magical elixir that would imbue them with the virility and heartiness of an Indian brave, restoring their otherwise diminished manhood," text explains.

A series of lithographs made by American artist Charles Bird King between 1822 and 1842 gestures toward a more documentary approach to indigenous American cultures. These detailed portraits of prominent tribal leaders show variation in appearance and dress not represented elsewhere. Still, the images belong to "salvage ethnography" — the practice of observing and recording threatened ways of life. In this case, predator and documentarian were inextricably linked: King was commissioned by the U.S. War Department.

One work in particular stands out for its anxiety about the course of American expansion: "The Death Struggle," an 1845 oil painting by American artist Charles Deas. Here, a crazed white man and his white horse plunge over a cliff; a shirtless, dark-skinned Native American man clings to him as another looks on from safety. It is a stark departure from the generally conciliatory conquest-as-progress/conquest-as-product message of the show's other artifacts.

"Playing Cowboy" is, and should be, heavy and uncomfortable viewing. At a time when America's foundations are being shaken, it's important to consider how fundamentally violent social myths are fabricated. This show highlights how the imagined West was transformed into a commodity, with the cowboy as its ambassador. If you understand how products are made, you can refuse to buy them.

Speaking of Pizzagalli Center For Art And Education, Shelburne Museum