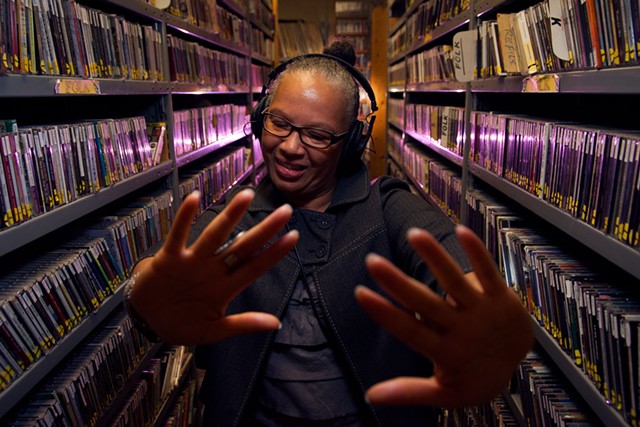 His surname, Thorsen, means "son of Thor," the hammer-wielding Norse god of thunder and lightning and protector of mankind. So how do you live up to that? If you're Matthew Thorsen, you go a lot of places and take pictures.

In "Thorever: The Photography of Matthew Thorsen," currently on view at the BCA Center in Burlington, some of his many haunts are on exhibit. Thorsen's work as a photographer is laid bare in approximately 30 images: bright, bold, poster-size color portraits and smaller, framed photos of musicians, politicians, family, friends and scene makers — plus a few selfies for good measure.

"Thorever" occupies two of BCA's galleries and the walls of the stairwells that connect them. As one walks downstairs from the main floor, Thorsen's black-and-white photographs of local bands line the corridor, fueling the sense of heading into a nightclub. Can the sound of a crash cymbal or the ring of guitars be just around the corner?

Bands such as Rocketsled and Wide Wail stare dark-eyed from their framed photos as if the 1990s club scene were only three power chords away. Photos of father and son Jimmy T. and Jamie Lee Thurston, Troy Pudvah, Yolanda, James Kochalka Superstar, and Craig Mitchell continue the visual trip through genres ranging from country to pop to indie-punk.

This photo grouping is on loan from Big Heavy World, a music-oriented Burlington nonprofit that helped produce and tour Thorsen's "Sound Proof" exhibit in 2011. Thorsen chronicled the Burlington music and art scene of the 1990s in multitudes of portraits, captured on film before the digital age ramped up. These images, as well as photos from Seven Days — where Thorsen is staff photographer — ensure the era lives on in more than memories.

As visitors continue along the hallway to BCA's basement gallery, they're greeted by larger-scale color photos, including a macabre but compelling photo of Thorsen's father, George Thorsen Sr. In "Dad's Send Off (2013)," the elder Thorsen is deceased, lying in state, surrounded by leaves, roses and plastic grass. His chest is crisscrossed with barbed wire; he holds a handgun.

The image encapsulates a few qualities of Thorsen's work: a strong sense of humor and the absurd, a life-affirming curiosity, and a comfort with risk taking.

In an artist statement for Big Heavy World, Thorsen notes that he was raised working in a family business where his duties included photographing procedures and inventory. "What I learned in the lab, I applied in the field," he writes. Thorsen adds that he formed a photo club at his high school and served as its president for four years. After three years of college photography classes at the University of Vermont, he decided to ply his trade in the real world. Shortly afterward, he notes, he won second place in Kodak's largest photo contest and used the money to travel extensively across Asia. 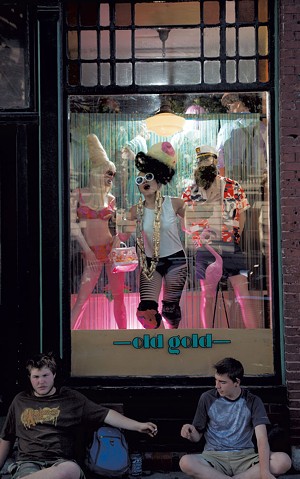 "I crossed China twice — once to Mount Everest and second through the Gobi Desert — photographing endlessly," Thorsen recalls. "I spent months in Pakistan, Tibet, Nepal and India, where I began to understand what light was saying to me and what I could say with light."

Thorsen ended his foreign travels in the French Alps, but not his learning. According to that same artist statement, while in France, he trained in mountaineering photography and climbed many of the highest peaks and passes. Thorsen also maintained a darkroom there, took photos for a hockey magazine and studied French at the University of Lyon.

When he returned to the U.S., Thorsen teamed up with friends who were publishing a local music zine, Good Citizen. That's when he began photographing every band that came across his radar, including music legends such as Big Joe Burrell.

Thorsen later worked with grassroots and community organizations. He began shooting for this publication shortly after its inception in 1995.

The exhibition selectively samples Thorsen's years of shooting arts and news stories. "DJ Melo Grant, 'Cultural Bunker' on WRUV 90.1 F, 2017" — from a cover story about the longtime hip-hop radio host — positions Grant amid rows of CDs in the station's music vault. Light radiates behind her like a halo in colors associated with neon signs, offering a visual nod to the nightlife.

In "Hiroka Nakahira, 2016," Thorsen's subject poses between two mannequins in the window of the Old Gold clothing store in downtown Burlington. The window frames her like a portrait within a portrait. Below it, two young men appear to be sharing a doobie. Were they in on the photo shoot, or was it serendipity? Thorsen carefully curates his tableaux, so even seeming happenstance is likely to have been planned.

The images in this section of the show are large, printed on paper approximately 36 by 60 inches, and affixed to the gallery walls with round magnets. They continue up the stairs to the second floor, where a variety of framed diptychs pair strange bedfellows. Case in point: singer Kat Wright and politician Richard Kemp.

Then again, in a world viewed and captured by Thorsen, nothing is strange; it is simply a wonder. He participates in it by photographing people of all ages, races, genders — all, seemingly, to be celebrated.

Viewers of "Thorever" can witness only a fraction of what this photographer has seen through his ever-present camera, but the images give us insight into the freedom of truly being oneself.