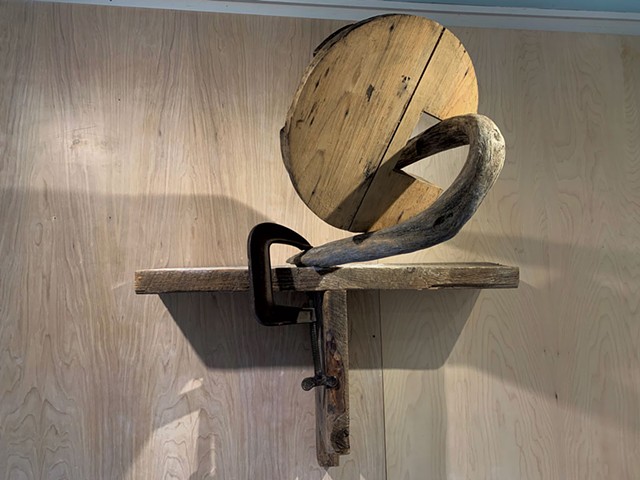 Can an assemblage of found wood and old tools have a personality? If so, that might account for the otherwise inexplicable pleasure of viewing Paul Bowen's creations. Four of his sculptures, along with five of his drypoint prints, are currently on view at BigTown Gallery in Rochester. The show, titled "Wood Ledge," includes the latest work by an artist who has been collected by the Guggenheim Museum in New York, the Museum of Fine Arts in Boston and the Walker Art Center in Minneapolis, among other institutions.

Bowen, 68, was born and grew up in the Welsh seaside town of Colwyn Bay. He moved to the U.S. in 1977 for a fellowship at the Fine Arts Work Center in Provincetown, Mass., where he lived for nearly 30 years. He left the sea behind when he moved to Vermont in 2005, settling in Williamsville, just north of Brattleboro, after discovering it while he was artist-in-residence at Dartmouth College.

Those first two phases of Bowen's life — in coastal towns in Wales and on Cape Cod — remain the inspiration for his work. As BigTown's owner-director, Anni Mackay, put it during a recent visit, "Everything is about this land-sea relationship." Bowen's introduction to the show, posted in the gallery, begins by recalling his days of beachcombing as a child and, later on Cape Cod, as a young artist turning from painting to sculpture.

The pieces from which the four sculptures are made — a wooden bucket with wood and metal staves; rusty metal clamps; wooden barrel lids and wedges; nails; twisted sticks bare of bark — could well be beach finds. Bowen brought a lifetime's trove with him when he came north. He lives with such objects for a while before attempting to use them, according to a 2015 profile in Provincetown Arts. Some elements may also come from the banks of the Rock River, which runs by Bowen's Vermont home.

Two of the three wall sculptures and the single freestanding piece were repurposed from commissioned works Bowen made for a group exhibition called "On Edge" at the Aldrich Contemporary Art Museum in Ridgefield, Conn., in 2018. That show explored the uncertainty created by positioning artworks at the edge of a table. Bowen precariously balanced his using carpenter's clamps.

In "Wood Ledge," clamps hold the works together at certain junctures, conveying a sense of impermanence within each sculpture. But the wall-mounted pieces are now held in place by shelves and ledges, less at risk than they were in their original forms in "On Edge." One reviewer likened Bowen's shelves to a horizon line; they might equally recall the beachfront wrack line that the artist trolled for much of his life. 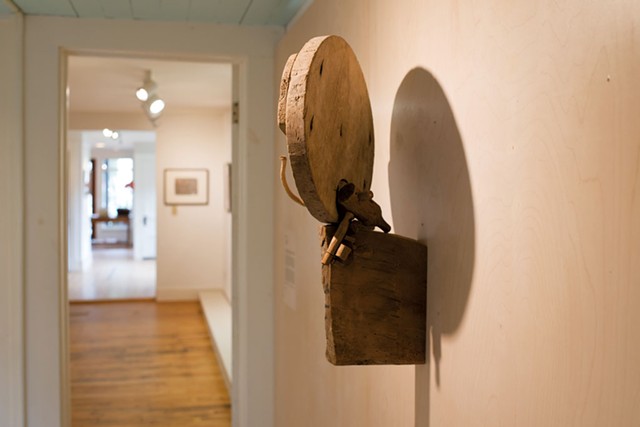 "Buggy" is anchored by a section of old lumber positioned vertically, with the disc of a well-used barrel lid balanced like a spinning coin on its thick edge. Anchoring the lid are a small carpenter's wedge on one side and, on the other, a Louise Nevelson-like assembly of smaller cylindrical pieces nailed together. A small circle has been cut from the barrel lid and replaced with one from which a curved, whittled stick or root juts like a handle. The smaller disc is positioned just off-kilter within its opening, like a spinning satellite moon passing across the surface of the larger disc.

Whether the artist found the prow-like ledge of "Buggy" as is or hewed it to the shape he wanted is the sort of question his work often raises. Bowen's interventions aren't always obvious; when deliberate, they can appear rough, as if performed using the same antique or rusty tools he includes in his assemblages.

Bowen's sculpture explores the intersection of forces at work on objects, whether those forces come from the original fabricators and users, nature and time, or the artist. A polished look is not his goal; instead, each work performs a kind of tenuous alchemy in the interaction of its parts.

"Old Root" involves the fewest elements, yet it's the show's most compelling work. A metal clamp pinches the end of a curved piece of driftwood to the horizontal edge of a T-shaped shelf. The driftwood bends out and back through a square cutout in the side of a circular barrel lid, supporting that lid at an angle while seeming to float through it. The bold mirroring of a simple shape — the parenthesis of the clamp opposite that of the driftwood — is framed by the geometric forms of T, square and circle to achieve a kind of architectural balance. Bowen's father was a Bauhaus-inspired architect. 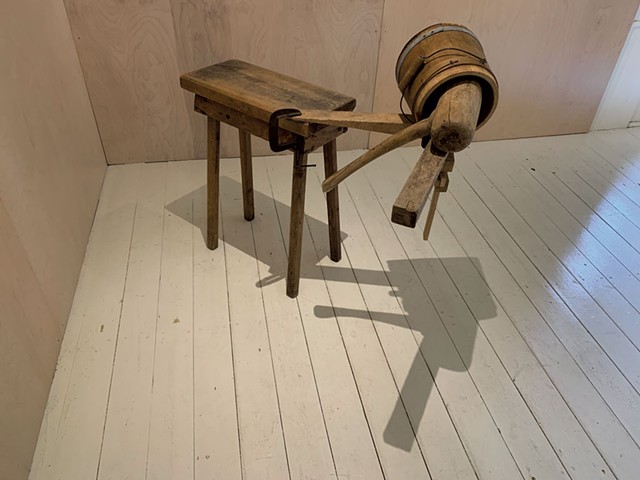 "Firkin's Edge" began life attached to a large table at the Aldrich; here, it takes on an entirely different character clamped to the corner of a small workbench. A hand-carved wooden mallet fastened inside a tipped bucket looks to a viewer like an inquisitive animal head extending from an appropriately scaled four-legged body — the two-foot-high bench. Bowen writes in his introduction, "[T]o me [the sculptures] are like animals that might just give a nip if petted roughly."

The five drypoint prints in the show, measuring roughly seven by nine inches or less, are small glimpses of the "land-sea relationship" that Mackay finds paramount in her compatriot's approach. (The director is also from the UK.) In "Float House II," minimally etched barns, piers and houses on stilts emerge from the water, surrounded by the shadowy forms of boats. "Spy" and "Seaing" integrate Bowen's eyes and signature bushy eyebrows into the sky and seascapes. He calls these two "self-portraits," referring both to the facial features and to their symbolic encapsulation of his life's project.

While many artists today address threats to the natural environment, Bowen engages with the natural world for a different reason. His work gathers historical evidence of both natural and human-made destruction and creation. That process of building and unbuilding continues in the gallery, animating work that appears to be as easily dismantled as it is finely wrought.