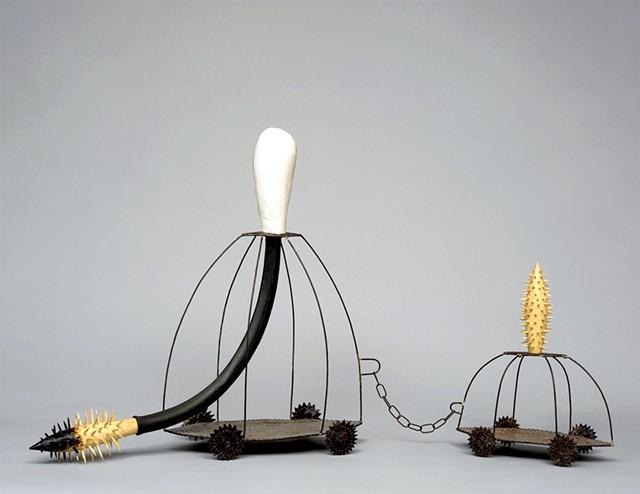 In recent months, Margaret Atwood's dystopian novel The Handmaid's Tale has garnered renewed fame and attention, not least because of Hulu's forthcoming series adaptation. One aspect of the story likely to be lost to television is Atwood's razor-sharp turns of phrase, which make (very) dark jokes of standard idioms in service to her feminist warning. "It's not running away they're afraid of," she writes. "It's those other escapes, the ones you can open in yourself, given a cutting edge."

"The Final Cut," at the Castleton Downtown Gallery in Rutland, has much in common with Atwood's serious play. Instead of the written word, Stony Brook, N.Y., artist Pam Brown uses visual and material language to upend conventional readings of "traditional" femininity and softness as they relate to nature, process and sharp tools. Through freestanding and wall-hung sculpture, as well as mixed-media collage, Brown makes a compelling argument that delicacy and strength — and, indeed, violence — need not be mutually exclusive.

"Mandrill" is the only work visible from the gallery foyer. It is singular among the 40 works on view yet hints of what's to come: an abiding engagement with symmetry, botanical forms and sexual anatomy, jagged edges and remnants of industrial machinery.

Imposing at more than five feet in diameter, the wall-mounted work features 12 calla-lily-esque forms emanating outward from a mandorla-shaped center. It resembles both a massive flower and an antique drill, effectively harmonizing hyper-feminine and hyper-masculine associations. 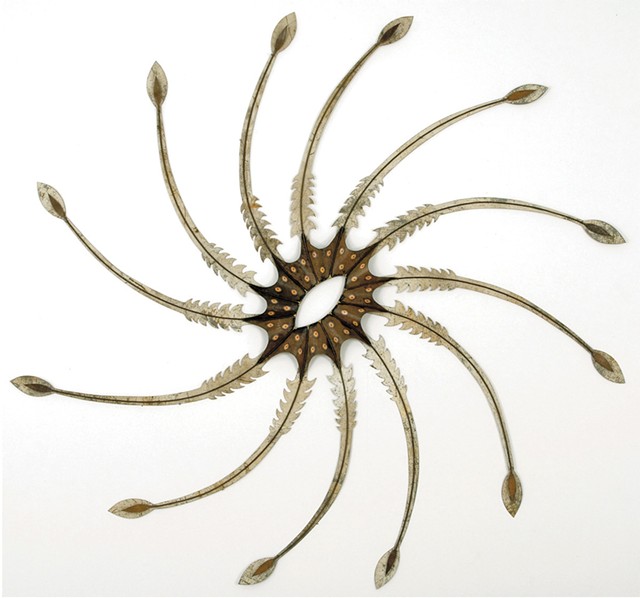 On this scale, the sex life of flowers suddenly becomes a lot more real. One is reminded, for example, that a primary feature of "feminine" flowers is their phallic, pollinating stamen. The innuendo of "Mandrill" is ample and unabashed, not least within its title: A mandrill is a baboon known for its audaciously colorful (and swollen) butt, and "man-drill" seems straightforward enough.

This play of sex and genitalia runs through Brown's strongest works, many of which maintain a subversive folk sensibility. Wall-mounted floral pieces in sheet metal such as "Above and Below" and "It's a Trap" are, like "Mandrill," commanding in size and might appear at first glance to be primarily decorative.

"It's a Trap," in particular, manifests Brown's preoccupation with imbuing elemental forms with shades of violence and threats of captivity. The thorn-spiked ovals at its center evoke at once the notoriously carnivorous Venus flytrap and the centuries-old mythology of vicious vagina dentata.

Akin to the trap, cages are a potent form for Brown. She writes on her website that she uses such structures "to create a sense of inner and outer that permeates our psychological lives." Appearing like a mother/daughter pair of small toy elephants, "Like Mother, Like Daughter" may offer the cutest and most personified cages you'll ever see. Curved wires on wheeled platforms form the loose outlines of the "creatures," also evoking the wheeled cages of the old-time circus. This particular work raises an existential question: When one's body is the cage, who or what is being captured?

Freestanding works "Black and White" and "Beater" use zigzag-cut metal to evoke teeth, traps and torture devices. "Black and White" is one of the show's most striking and dramatic objects. The sculpture's "skeleton" is built from triangular cut metal in the rough hourglass shape of a woman's corset. A white-painted, oblong wooden handle enters through the top of the sculpture and is affixed in the middle to a rubber tube, which emerges again from a red-tipped, spiky circular orifice in the metal.

"Beater" features a wooden handle attached to a raindrop shape of toothed sheet metal; the latter is encased in an open wire cage. It certainly looks like an instrument of harm, but also like an old-school rug beater, that most mundane of household items in a countrywoman's arsenal.

Consideration of the artist's own tools and methods as forces of creation and destruction seems to be paramount in Brown's practice. Though she works with industrial metals, her sculptures are sewn with wire. Scissors are a recurring image in both her sculpture and collage work; in "Mountain Lake Collage Series: Cutting," the central cutout of a pair of scissors appears to be dripping blood. Within the context of gardens, collage and "women's work" that she has created, Brown obfuscates the lines between nurturing growth and death.

Not everything packs so strong a punch. Some works, such as "The Lookout" or "Brown Betty," stray a little close to country whimsy. Not that there's anything wrong with that, but Brown achieves her greatest successes by placing such "benign" forms in conversation with archetypal representations of gender, sex and violence.

The meager exhibition text consists of a three-sentence artist statement, which reads like a neutered, declawed version of the longer one on Brown's website. While the former simply describes the work as being about nature and dichotomies in general, Brown's online statement boldly places it in an art-history context: "The association of industry and domesticity engages a sensibility different from the 'heavy metal' approach to sculpture that dominates much of American modernism and carries a strong element of bravado."

Fortunately for viewers, the work can speak for itself.