Joseph Salerno's solo exhibit at the Vermont Studio Center in Johnson, "Dark Woods," consists of 101 small paintings of tree trunks. These 6-by-9-inch works are arranged in a line around the room, in the order Salerno painted them during the 18-month project. Some depict three or, in rare cases, four trunks, but most have one or two, positioned front and center like pale bars on dark backgrounds.

Something about the verticality, repetition and muted colors of "Dark Woods" — combined with, it must be said, the artist's Italian name — immediately conjured for this reviewer the work of Giorgio Morandi, who painted bottles and other vessels in carefully arranged groupings his entire career.

As it turns out, that association is not unwarranted. Salerno, who recently met with Seven Days at his exhibit in Gallery II, volunteered that Morandi was a central influence. "I think I am coming to my roots," declared the Ohio native, whose grandparents all emigrated from Italy to work in the steel industry. 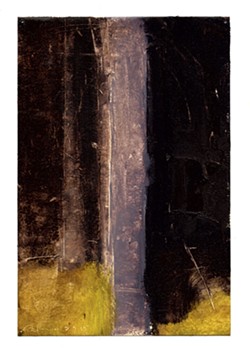 What Salerno called "that insistent quietness and organizational structure" in Morandi's works are features of his own. While the painter from Bologna minutely planned each vessel's position, however, Salerno commented wryly, "I would struggle to have that much control over a still life." Of his own paintings, he said, "The trees create these compositions."

Salerno, a professor in Johnson State College's fine arts department, painted almost daily in a dense pine and spruce wood about a mile from his house, also in Johnson. The wood's "impenetrable darkness" and "unending value contrasts" provided the artist with what he called "a never-ending supply of paintings." (The 101 on view are selected from among a far greater number.) Sometimes he would return obsessively to the same tree or group of trees and have to force himself to move on "after about five days," Salerno said.

These works capture not nature per se but a kind of abstraction of presence. Seen from a distance, certain trees appear to be grounded in, perhaps, a yellow-green ground cover or rust-red drifts of leaves, but up close there is no such particularity. The trunks vary from vaguely shadowed to completely flat; some bisect the painting like stripes. In these, often, the bar of darkness between two trunks appears to emerge as a third column, a negative-space presence in itself. It is rare to see a show that so finely balances abstraction and figuration, falling into neither category unequivocally.

Salerno had a breakthrough when he took up a knife instead of the sharp end of his brush handle, he said. With this instrument he marked suggestions of twig-like branches that extend like short arms from the trunks. At this point, he said, he realized he was painting crucifixes and altar pieces. He had encountered many of both in churches over the two summers he spent in Florence during his graduate studies at Indiana University in the mid-1980s.

Another influence soon dawned on him: 16th-century Florentine fresco painter Rosso Fiorentino's "Descent from the Cross," a detail of which hangs in his home. "I think I've been trying to make that painting for 30 years," Salerno said with a smile.

If quietness results from contemplating Morandi's bottles, Salerno's woods invoke disquiet. Apart from the initial 12 paintings — canvases that were framed for inclusion in a recent show at Vermont Metro Gallery in Burlington — the works were done on prepared paper and pinned directly to the wall. That flatness somehow heightens the indeterminate depth of the paintings' backgrounds. In one, the darkness between two trees takes on a definite mass, encroaching on the trees' bases in pooling black paint. 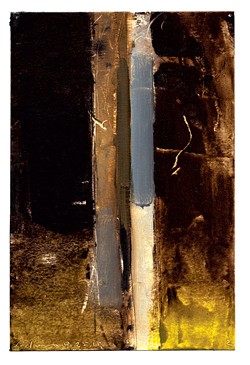 Because of their chronological arrangement, the paintings seem to propose a narrative of process and vision. (Salerno prefers the word "conversation.") Indeed, there is a great difference between the initial paintings — somewhat traditional landscapes whose trees cast bluish shadows on snow — and the last, a bar of tan-gray without much to indicate season or time of day.

But there is hardly a march toward abstraction. Perhaps the least objective renderings come shortly after the west-facing wall, about a third of the way through the sequence. With their gridlike appearance and inscrutable darkness, these seem not that far from a Rothko. Others that follow are finely evocative of dense forest and bare branches that never see the sun.

Salerno, who works in motifs — his last series was a study of clouds over mountains — said of the "Dark Woods" series, "This group just took over. I thought there was something magic in [them]." For the viewer, these paintings may well have the same effect.

The original print version of this article was headlined "Trunk Show"