When stick season, aka November, arrives in Vermont, some people get depressed. But Wolcott artist Gabriel Tempesta seems to relish nature at its most somber. In his current exhibit, "Our World, Charcoal & Casein," at Stowe's West Branch Gallery & Sculpture Park, the 11 works are executed in black and shades of gray on paper or board. A couple of sepia-toned pieces, and another with a small patch of brushwork in midnight blue, are the only departures here. Most of these paintings are studies of trees, but a rocky seashore, a lily pond and several creatures appear, as well. Paradoxically, the works are both stark and luxuriously detailed.

Tempesta notes his choice of materials in the very title of the show — though he could also have listed watercolor; it's used in more than half of the paintings. Like it, casein paint is a fast-drying, water-soluble medium, derived from milk protein (his is made by the Massachusetts-based Old Fashioned Milk Paint Co., Tempesta notes). Given that two of his mediums are runny and the third can turn to dust, the precision of his artworks is utterly stunning. In fact, from a short distance they could be — and have been — mistaken for photographs. 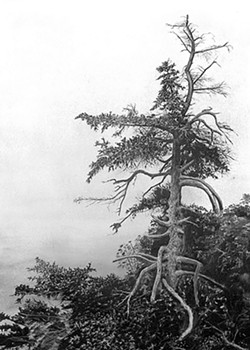 Tempesta does take pictures of his chosen subject matter and works from the photographic images in the studio, he acknowledges. Still, photorealism does not seem to be the goal in these paintings. A close observation of them indisputably reveals the work of the artist's hand.

Tempesta got his formal training at Montserrat College of Art, but he credits his "formative years in the Vermont landscape" with influencing his painting. "I am moved by the visual poetry in the trees and fields that surround me and look to capture and celebrate that with my artwork," he writes in an email to Seven Days.

Rather than offering wide views, his take on landscape gives special potency to the idea of getting "close" to nature. Tempesta looks at the trees rather than the forest, as it were. In fact, not even whole trees; many of his paintings focus on bark. Only a microscope could offer a more intimate view.

In the casein-on-board piece "Old Birch on Elmore Mountain," Tempesta's perspective is reverential and the opposite of vertiginous. The point of view is from the ground looking up at the ancient tree, its bark rough and minutely delineated. All of the branches are bare, and some of them have been broken. This birch has been through a lot. Overhead, the sky is overcast, a featureless pale gray. Just 32 inches square, the painting can make a viewer feel small.

The 20-by-18-inch "Nebraska Valley Stowe Afternoon II," using charcoal and watercolor on board, zooms in on a higher point in another tree. The picture plane is condensed, the POV that of a bird or a squirrel. The sky is stormy, yet the sun pierces through enough to illuminate every tiny twig. Collectively, they take on the appearance of a neural network, fluorescent white against dramatically dark heavens. The contrast is riveting.

Giant shelf fungi dominate the foreground in "Relic," which at 48 by 24 inches is one of the largest paintings here. The mushrooms appear on the trunk of yet another gnarly tree like toeholds on a climbing wall. Again, Tempesta directs the eye upward — except for a hole low in the tree that introduces an inky spot. It's hard not to gaze into that darkness and wonder what might lurk within.

Mysticism takes a front seat in Tempesta's bumblebee paintings, two of which are included here. Though he paints the insects with characteristic exactitude, the artist allows himself to fudge the details where the "mysterious creative forces of the universe," as he puts it, are concerned.

In "Pollinator #2," a bee is busily at work on a bee balm flower, and the indistinct petals seem a-flurry in reciprocation of this vital exchange. "Creator #1" is downright dreamy. The bee is seen from behind, its black-and-white markings lucid, its fairy wings in motion. The insect is departing something dark and womb-like. A hive? It would surpass the skills of a casual photographer to capture such an image, so Tempesta clearly imagined it — and puts the viewer inside the hive.

What lies ahead of the creature is "nebulous deep space," the artist writes. And that's as good a description as any for the ambiguous blobs and spatters with which Tempesta represents the bee's universe. We don't know exactly where it's going, but its life-affirming mission is unmistakable.

Tempesta's cat is on another kind of mission. Though in a way the most prosaic painting in the exhibit, "Hunter in the Field" captures the feral killing instinct that has survived centuries of domestication. Stalking through grasses, this kitty is on alert, its eyes focused. Perhaps it has already spotted its prey. The image is tightly cropped, just a 24-by-28.75-inch rectangle of grass and cat. The light source — presumably the sun — is strong, and because this work is black and white, the light fur of the feline's face fairly glows. Each blade of grass is distinctly rendered.

In charcoal and watercolor, Tempesta again delivers the stuff of life without a speck of color.

UPDATE JANUARY 6, 2016: This exhibit has been extended to February 15. The original print version of this article was headlined "A Closer View"