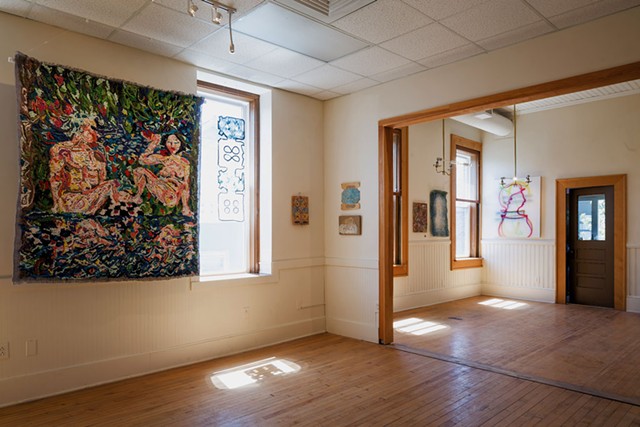 The saying "The worker must have bread, but she must have roses, too" originates in a speech that labor union leader Rose Schneiderman gave at a 1912 textile strike. Plucked from history, the phrase invites broad reflection on the tangled ideas of beauty and resistance. For one thing, optimism — and insisting on pleasure — is not a crime.

Now on view at Burlington's New City Galerie, "Optimist Prime" emerges like a twinkling, winking constellation, a tiny but potent counter to the sludgy exhaustion of our global shit show. Guest-curated by artist and Fiddlehead Brewing head brewer Michael Shoudt, the group exhibition includes eight artists connected through Shoudt and, in most cases, by time spent at Rutgers University's Mason Gross School of the Arts.

Described by Shoudt as "a room buzzing and humming with positivity," the sunlit second-floor gallery indeed radiates a sort of primal springtime warmth. Think May Day. Forms are fluid, right angles are sparse, and references to the revelry — and hopes — of paganism are delightfully plentiful.

"First Date," a hanging impressionistic fiber work by Los Angeles-based Liv Aanrud, explicitly conflates Christian mythology and witchcraft. Male and female nude figures consort in an Edenic garden amid red fruits and a pool that reflects their pink flesh. Instead of being a human Adam to the cherubic woman's Eve, however, the male figure bears the head of a goat — presumably a reference to Baphomet, the ram-headed embodiment of the devil and his natural proclivities. Temptation abounds, and it looks pretty good.

Smaller in scale but just as vibrant is Aanrud's "Myth Moth," a ragged-edged, vaguely symmetrical fiber work with glowing purplish circles for the moth's so-called "eyespots."

Like Aanrud, New Jersey-born Steven Mayer uses palpable texture, seasonal turns and basic magical symbols to evoke the otherworldly. "Down in the Vale," a garden stone-esque round of plaster, clay, acrylic and resin, offers a frozen tableau of icons: a flipper-footed figure in a pointed red witch's hat, a hand with fingers made to look wiggly, a sperm-like shooting star, and a four-pointed yellow star.

Works by Brooklyn-based Katie Hector reflect both the show's themes and the 21st-century phenomenon of internet-fueled feminist magic and moon worship. Her three abstractions — titled "Double Tapping Moon Vibes," "Clickbait" and "Tumblr Grl II" — layer painted wood in pleasant, graphic compositions. "Clickbait," in particular, evokes the oddity of contemporary black-mirror existence. An amorphous blob of pink and blue smears (is it a fish?) partially obscures a reflective, orb-like circle beneath it; just about anything, from gleeful paint smears to truly dark forays, could come from that glassy void.

Tamara Gonzales, also based in Brooklyn, smartly complements Hector's internet-inspired constructions with "Pallene." The perfectly spherical canvas seems to vibrate with electricity, represented by chain-link-shaped patterns of color against a black background. "Pallene" is the name of both a small moon of Saturn and a mythological consort of Dionysus.

Hyde Park, Vt.-based Peter Gallo, dubbed a "neoslacker" and "alert scavenger" by Artforum magazine, presents five sculptural paintings — all untitled — that align well with Gonzales' visual language. His two larger pieces have a utilitarian bent, with canvases stretched precariously over skewed frames of kindling. Both structures suggest life rafts or primitive battlefield stretchers. With a cynical nod to humanity's perpetual warfare, one of these announces in soft pink, "War is over!"

Brooklyn's Catherine Haggarty presents the bright, irreverent spray-paint figuration "Boy in Pot," as well as "For St. Chamas," a map-like semi-abstraction named for a French commune.

Shoudt's description of "Optimist Prime" as a "painting show" is slightly confounding. While artists such as Aanrud acknowledge the influence of the language of painting, her work is appealing in large part because of its non-painting qualities: its gesture toward the folk thrift of rug hooking and its dimensions of "feminine" domesticity. Similarly, Hector's layered surfaces of painted wood deny the defining element of traditional painting and screen culture: confinement to a flat plane. Gallo's works are just as much outsider-art-inflected assemblage as painting.

Whether or not Shoudt is advocating for an expanded definition of painting, "Optimist Prime" makes for solid viewing. This is a welcome infusion of playful works by serious artists, and an unabashedly joyous little party.

Correction, May 18, 2018: An earlier version of this story misstated curator Michael Shoudt's place of employment. Shoudt is head brewer at Fiddlehead Brewing Company in Shelburne.