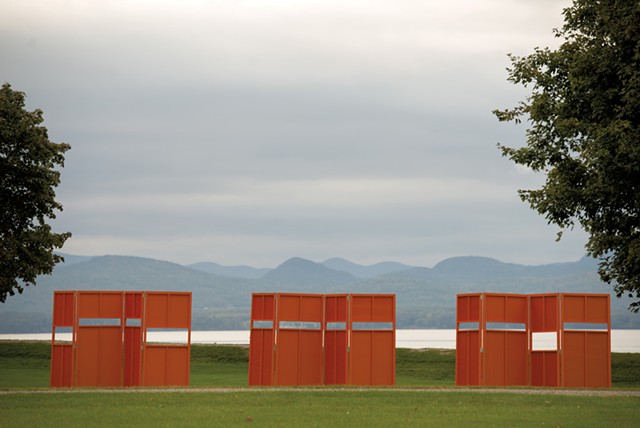 In Vermont, a show dedicated to art inspired by the local landscape — or by a particular natural element or feature — is no rarity. But "Of Land & Local" is the state's highest-profile showcase of work that relates to ecology in a decidedly contemporary fashion. The exhibition, a collaborative initiative of Burlington City Arts and Shelburne Farms, is now in its fifth year; it's open at both sites briefly. (The show at the Shelburne Farms' Coach Barn closes on October 29, while that at BCA closes in January.)

"Of Land & Local" was initially conceived by former BCA curator DJ Hellerman as a fusion of Vermont's celebrated environmental and agricultural economies with its perhaps less celebrated cultural scene. Indeed, when BCA launched the very first show in 2013, it benefited from a marketing partnership with the Vermont Department of Tourism & Marketing.

This year's iteration is part two of a two-part "Watershed" theme. With Heather Ferrell now at BCA's curatorial helm (aided by outgoing assistant curator Ashley Jimenez), what stands out most is the influx of works that have no immediate connection to the state. Five of the show's 16 artists are based elsewhere, mostly in New England. Two of these, Boston-based Georgie Friedman and Brooklyn-based Lynn Sullivan have created site-responsive works.

Here in the heart of fierce state pride, whether "new blood" appeals or repels is up to the individual viewer. Whatever your bias, this tweak in exhibition parameters undeniably moves the premise of the show from "water in Vermont" toward "water," in Vermont. 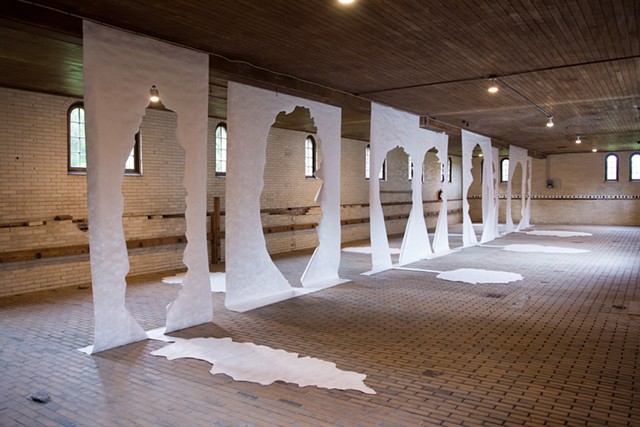 Sullivan's breathtaking installation "Slip, Shift or Spill," at the Coach Barn, exemplifies another trend in the show: water serving as a proxy for ecology at large. Sullivan has suspended eight panels of white Tyvek from the center of the ceiling in the barn's adjoining brick room. She has cut the outline of a particular species of tree from each; these tree shapes, barely attached at the bottom of the Tyvek sheets, spill across the barn's cobblestone floor on alternating sides. The effect is ghostly, conjuring death, portals and questions about roots.

Saint Michael's College assistant professor Brian Collier is another artist whose work extrapolates the concept of "nature" from water. "Of Land & Local" provides a fitting context for the debut of "Unlawning America: A Call to Inaction," the latest cause espoused by his Society for a Re-Natural Environment. At both sites, Collier has borrowed from science fair and academic conference aesthetics to mount multimedia installations that explain the environmental benefits of abandoning lawn care: namely, conserving energy and fostering biodiversity and pollinator-friendly environments.

Among Collier's plant specimens and educational texts is a simple and oddly captivating split-screen video. On one side, the camera focuses on the tranquil movements of a butterfly on a stalk of milkweed, or on Queen Anne's lace swaying in the wind. On the other, a regular Joe in shorts operates a massive lawn mower, mowing pass after pass. Which is prettier? 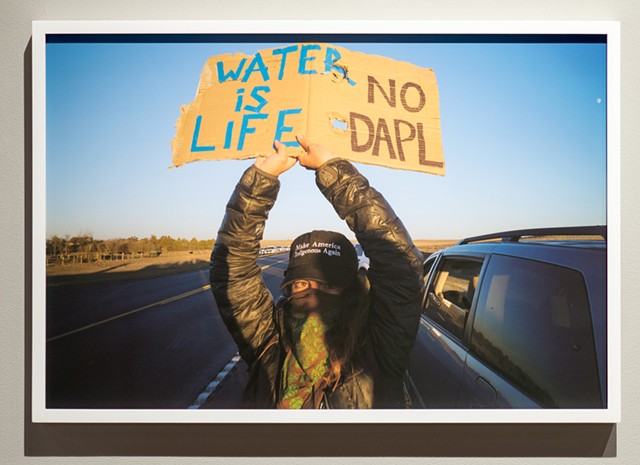 Photography is further represented by Don Ross, James Scheuren and Mary Zompetti. Ross' crystalline, painterly landscapes interrogate the quarry as a sublime scene of human intervention. The pools of stagnant water at the bottom of these quarries serve to mirror the rock planes downward to infinity. A newcomer to Burlington, Scheuren took the city waterfront as the subject of his series "Everyone Whispers Under the Stars," a mixture of portraiture and abstracted lake- and mountainscapes.

Zompetti's "The Lasting Memory of Water" takes a more experimental and cosmic approach. This grid of digital prints features 18 images that Zompetti made by placing water and various specimens from Lake Champlain on 4-by-5-inch negatives. The diversity of forms that she captures negates any notion of water as a given. By engaging with alternative photographic processes and emulating scientific specificity, Zompetti evokes the element's mystical properties. She accompanies the work with her "Field Notes," a booklet cataloging each object photographed, the exposure time (anywhere from one hour to 19 days) and the type of camera used.

Out at the Coach Barn, Katz has constructed "Protection From the Wind," a striking site-specific installation drawn from the Japanese tradition of bybu, or decorative screens often adorned with representational paintings. This one is made of lengths of donated saffron-colored fabric stretched over wooden frames. A rectangular hole in each panel provides a uniquely framed view of Shelburne Farms' stunning waterfront.

Shelburne-based Milliken's "Intensive Rotational Grazing" is likely to be one of the exhibition's most divisive works. Composed of seven floor-to-ceiling canvas panels, the work displays the muddy hoofprints of cows in transit at Shelburne's Bread & Butter Farm. If you can stomach the exhibition label that refers to mud as "earth pigment" and describes the "collaborative process between farmer and bovine," then you may appreciate how the panels capture the traces of a distinctively Vermont process while referencing the slick urban aggression of abstract expressionism.

Massachusetts-based Suzuki's "Flow" brings a touch of interactivity to the exhibition. Guests are invited to use an on-site typewriter to describe their relationship to water. In exchange for their contribution, they are invited to remove someone else's from the wall.

Some artists, Suzuki among them, have works displayed at both the BCA Center and the Coach Barn. Particularly in cases of comparable works, such as Willis' photographs and Collier's installations, this arrangement can be a bit disorienting; it's unclear whether the sites are meant to be in dialogue with, or rough approximations of, each other.

As in previous years, "Of Land & Local" seems to vacillate among being a call to action, a collection of earthy meditations and a sort of general BCA missive on ecologically themed art in Vermont. It's no small feat to organize a cohesive show around topics as broad as water and the watershed environmental circumstances in which we find ourselves today. Here, though, a diversity of works that is meant to feel expansive can get a little murky.

Correction, November 3, 2017: An earlier version of this story misstated the number of out-of-state artists who created site-specific works.

The original print version of this article was headlined "Holding Water"