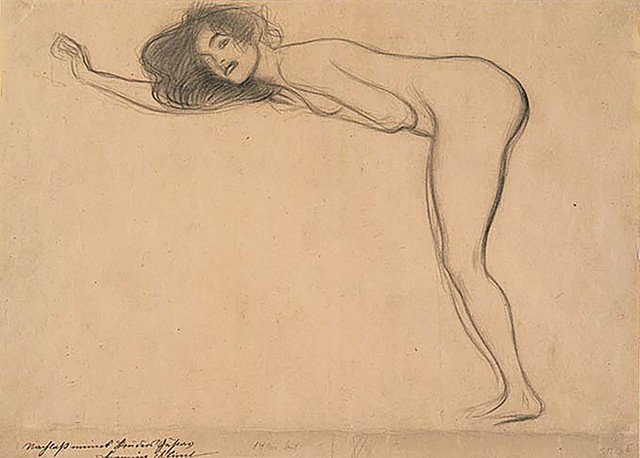 It is impossible to view the 50 works on paper in Middlebury College's "Naked Truth: Approaches to the Body in Early Twentieth-Century German-Austrian Art" and not think of "Degenerate Art," the notorious 1937 Munich exhibit devised by Hitler. Of the 15 artists represented in the Middlebury exhibit, eight were deemed creators of degenerate art by the Nazis: Otto Dix, Ernst Ludwig Kirchner, Max Beckmann, Erich Heckel, Oskar Kokoschka, Max Pechstein, Otto Mueller and Alfred Kubin. George Grosz escaped the designation only by immigrating to the U.S. early, in 1933. Käthe Kollwitz, the only woman represented in the show, was banned from exhibiting.

Without sharing the Nazis' judgment on these artists, one can understand it. Many of these drawings, lithographs, etchings and woodblock prints have lost none of the shock they imparted in their day. The nudes in the exhibit aren't disguised as figures from antiquity or the Bible, as academic convention long required. They are tattooed, grotesque, from the fringes of society: circus performers, whores and their johns, the unbeautiful and the starving. They embody the anxieties of their day and, one can't help thinking, a sense of foreboding.

"The mirror," writes Bettina Matthias in the catalog — the German professor co-curated the show with art history professor Eliza Garrison — "reinforces the sense that this painting is much more about how we look than what we look at."

The latest work in the group is Kollwitz's "Death Grabbing at a Group of Children," from 1934, a lithograph of a long-armed figure in a cape scooping up one dead child and reaching for another whose face shows unmitigated terror.

Most of the work here dates from between 1910 and the late '20s. Some prewar images reveal artists struggling with academic traditions; two by Grosz fairly tear classical conventions to shreds. His "Adoration" (1912), one of the more disturbing works on display, is a quickly rendered sketch of a male bust, complete with an erect phallus, atop a pedestal. The figure echoes Greek busts of the god Hermes, which often showed him erect — but this one has a leering grin and a disintegrating head. In a kind of surrealist revelation, Grosz adds two nude women worshipping the figure from prostrate positions on the floor, their butts high in the air.

Grosz was parodying another classical tradition in his "Woman Nurses Man" (1913). The drawing sends up the Roman figure of Charity, who was said to have suckled her father to keep him alive. But Grosz shows the nursing male with an erection, clearly enjoying his snack. 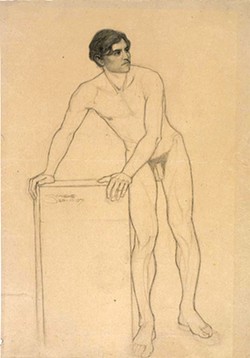 Works created after World War I often use the body to reference the war's carnage, the national humiliation resulting from the Treaty of Versailles, and Germany's failing economy, which was being ravaged by inflation. As Garrison writes, these nudes are "metaphor[s] for the body politic and capitalist excess." Dix's grotesquely big-bosomed women, particularly the prostitute and her pimp depicted in "Louis and Vohse" (1923), might be understood in this way. Both figures gaze, self-satisfied, directly at the viewer, who must then accept the challenge of "seeing" Weimar society for what it is.

All these extraordinary works belong to the Serge and Vally Sabarsky Foundation; Serge was a Viennese-born art collector who specialized in German and Austrian Expressionism, had a New York gallery for years, and died in 1996. The foundation has no website, but, according to Matthias, it holds more than 1,000 works in a warehouse in Queens. Some appear at the Neue Galerie in Manhattan, which Sabarsky co-conceived with founder Ronald Lauder, the Estée Lauder cosmetics magnate.

Middlebury was invited to submit proposals for exhibits of the Sabarsky Foundation's little-seen collection of works on paper after the foundation's director, Michael Lesh, saw the college on a campus visit with his daughter, says museum director Richard Saunders. "Naked Truth" is the second of three proposed exhibits. The first, "Visual Weimar: 1919-1933," occurred last year; the third, scheduled for fall 2016, is "Bloom and Doom: Visual Expressions and Reform in Vienna 1900."

"Naked Truth" is particularly powerful in the way that most artistic challenges to depicting the body are; think of the reaction to photographer Robert Mapplethorpe's nudes. Indeed, these works on paper arguably have the same draw today that they — or works like them — had in Munich in 1937. There, Hitler exhibited them as evidence of the cultural decay of a society run by Jews. He intended a second, concurrent exhibit, titled the "Great German Art Exhibition," to direct taste toward the idealized bodies of "racially pure" art.

In the end, viewers chose with their feet. More than two million came to see "Degenerate Art" — twice the viewership of the "Great" exhibit.

"Naked Truth: Approaches to the Body in Early Twentieth-Century German-Austrian Art," through December 13 at Middlebury College Museum of Art.