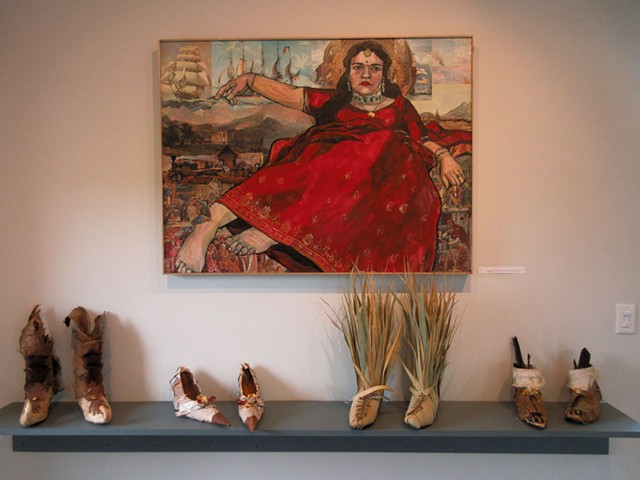 The current exhibition at GreenTARA Space in North Hero is a two-artist show of assemblages by Wendy Copp and paintings by Misoo. Titled "Identities: Cultural Creations," the pairing has a certain complementarity: Copp's work is funny and magical with undercurrents of gravitas, while Misoo's is serious and mythical with flashes of humor.

The multivalent identity of the historic building itself sets the tone. GreenTARA is a small restored church cleared of pews; the art hangs on a wall opposite the entry — in the former altar space — with tall, narrow arched windows on either side. In keeping with the building's original use as a general store, from 1823 to 1888, owner (and building restorer) Diane Elliott Gayer serves coffee and tea at a side bar.

Copp's work hangs on the altar walls. Her two dresses, three animal-head masks, and five pairs of boots and shoes walk the line between actual fashion and sculptures made from nature. These creations aren't wearable, but visitors will have fun imagining themselves in them. They're assembled from natural materials Copp finds in the woods near her South Burlington home: leaves, pine needles, bark, feathers, flowers and plants, including non-native phragmites (grasses that are invasive in Vermont), kangaroo paw and palm leaves.

There is something utterly delightful about "Run Away Bride" (2018), a pair of low-heeled birch-bark shoes with such exaggeratedly pointy toes that running in them would be impossible. The toes are wrapped in dark-brown leaves that contrast with the white birch bark. Dried flowers adorn the tops, and the heels are finished in acorn caps.

Those shoes would look splendid with "Returning to Earth" (2013), a dress wrought from the soft fronds of phragmites interwoven with rows of pine needles and groupings of feathers, including a duck's wing. (Copp paired her dresses and shoes for a 2018 group exhibit at the Kent Museum in Calais; for a 2013 solo show, she topped historical clothing displays at the Henry Sheldon Museum of Vermont History in Middlebury with her fabric- or papier-mâché animal heads.) The coat-like dress opens to reveal a skirt with a pattern of flower-like images made from maple leaves.

These exquisite creations raise the question of the longevity of Copp's work. Both dresses — the other, "The Huntress," is fashioned from grape leaves — were made six years ago. Were they greener then?

Copp indicates on her website that she collects her materials in specific stages of decay; one dress pictured there (though not included in this show) is made from successively drier rows of pine needles, from newly green ones at the neck to brown and brittle ones at the hem. Surely by now, however, the dress is uniformly brown.

Like Earth Art, Copp's art will eventually disintegrate, and perhaps it's meant to — but that's a shame. Robert Smithson's iconic Spiral Jetty earthwork sculpture in Utah is now owned and maintained by the Dia Art Foundation; one hopes for a Dia to step in and renew Copp's art at intervals, too.

But time and its effects are exactly Copp's subject. "At the center of my artistic explorations are questions about Time and the ephemeral nature of existence," she writes in a statement on her website, and she adds in a write-up for the show that the pieces relate to her mother's death. Perhaps the artist is more willing than this reviewer to let her woven-reed boots ("Walkin' Through the Rye") and the shriveling green vine emerging from a pair of phragmite-furred palm-bark boots ("I Won't Dance, Don't Ask Me") crumble to dust. For those who want a more lasting reminder, archival photos of the work by Michael Sipe are available for purchase.

Two years ago, South Burlington-based Misoo left behind her vast, ceiling-to-floor scrolls of black-on-white abstractions for two new series, mostly measuring 36 by 48 inches, that address the female figure. The 10 paintings in "Identities" include seven from her "Giant Asian Girls" series — four are self-portraits — and three from her "Giantess" series. 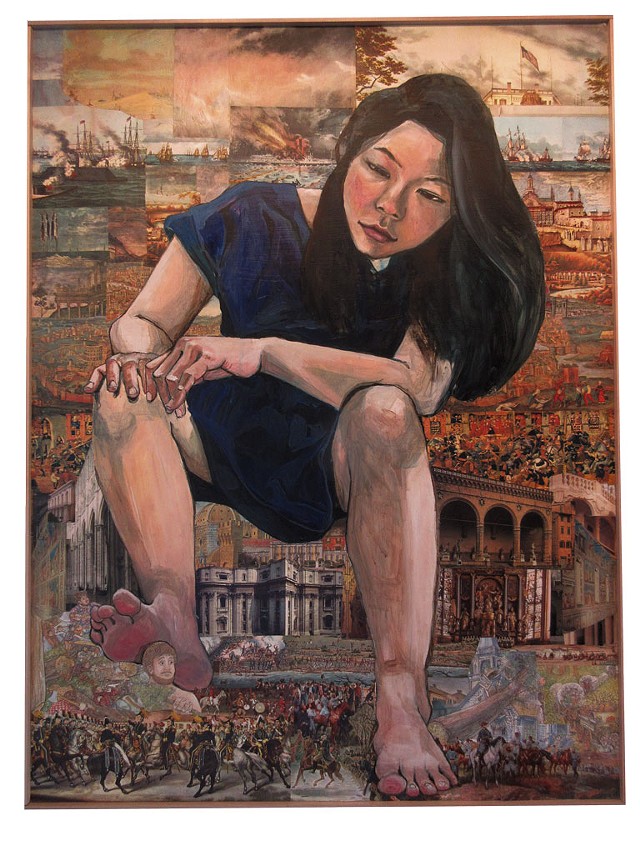 The use of the belittling word "girl" is ironic. Misoo's subject in both series, as in her abstract work, is the sexual abuse of women. For Asian women, this includes the white male assumption that they are not just relatively small in stature but "sexually exotic, physically delicate and culturally submissive," as she writes in a statement.

Misoo's riposte is a quintessential #MeToo statement. She depicts her subjects, including her non-Asian Giantesses, as dominant giants sitting alone, relaxed and unconcerned, amid collaged cities, buildings and populations, like Jonathan Swift's Brobdingnagians. Size is indeed everything.

Except for "Self Portrait 1," in which Misoo confronts the viewer from a chair set among a profusion of Disney storybook scenes, her paintings' backgrounds depict the signal achievements of Western art, architecture and culture, particularly of the Renaissance. The extent to which that legacy is male-authored jumps out at the viewer through contrast.

Leonardo da Vinci's nude Saint Jerome, for instance, squats at the bare foot of the sitting Giantess Quin, who rests her arm on the stained-glass windows of Chartres Cathedral. In "Giant Asian Girl — Weiwei," the subject's armchair is set amid an extensive collage of Michelangelo's Sistine Chapel ceiling.

Misoo snips her reproductions and photos from mass-produced art books, often reusing images. Her figures are heavily outlined in black, as if further to strengthen identities already empowered by their dominant sizes and unapologetic poses.

In "Self Portrait 4," the artist depicts herself in a Napoleonic pose, one hand tucked between the buttons of her military-esque jacket. Tiers of Renaissance and baroque church façades and interiors fill the background, including Francesco Borromini's San Carlo alle Quattro Fontane off her left shoulder. The figure manages to supplant two male bastions at once: military and religious.

Misoo writes in a statement that her art is meant as a "therapeutic intervention" for her subjects, all of whom are real women who have shared with her their stories of sexual abuse. But no matter how serious their expressions, these women inspire a chuckle for crushing male power so unwittingly — or, in the case of "Self Portrait 3," looking curiously down at a tiny male head underfoot before deciding its fate.

The original print version of this article was headlined "Two for the Showdown | Misoo and Wendy Copp, GreenTARA Space"