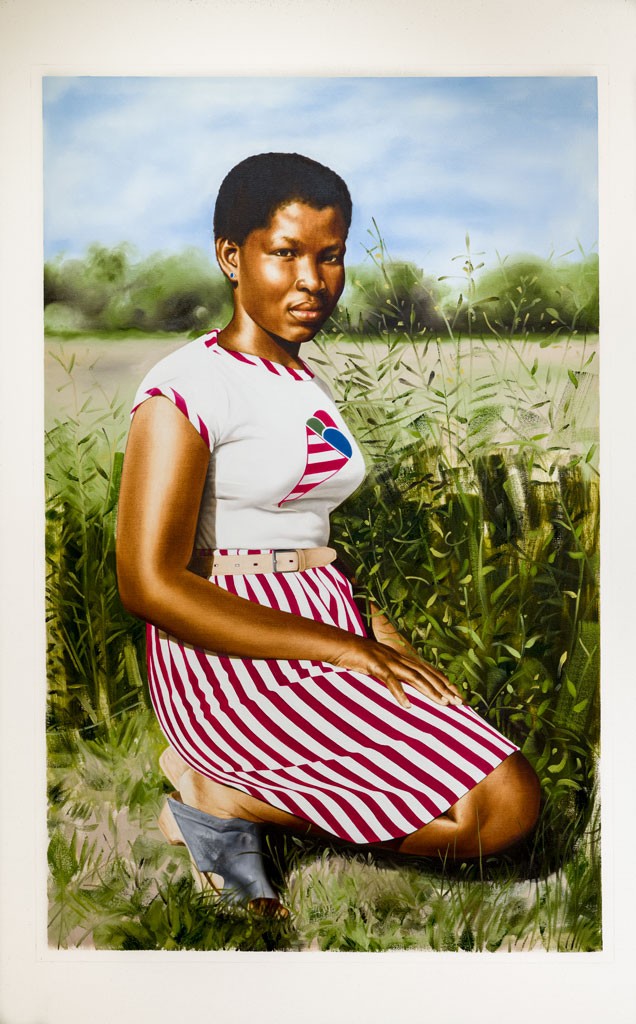 Walking inside "Scripto-visual," Meleko Mokgosi's spectacular exhibit of paintings and prints at the Current gallery in Stowe, the viewer encounters an 8-foot-tall enlargement of a fist-shaking political poem by Gladys Thomas. "You that remade us / your mould will break / and tomorrow you are going to fall!" Mokgosi borrows the title of his work from Karl Marx: "The Social Revolution of Our Time Cannot Take Its Poetry From the Past but Only From the Poetry of the Future."

In the margins and between the lines, Mokgosi — Botswana-born, now based in Brooklyn — has handwritten commentary that provides crucial context. The poem condemns the Group Areas Act of 1950, by which South Africa's apartheid government removed non-white people from their homes and relocated them to barren areas.

This massive piece of stark text forces Western viewers to shift their default frameworks and "figure out how to empathize and look at something from a position that is not theirs," as the artist told the New York Times in 2019. That is, to stop interpreting the revolutionary struggle evoked by the poem through the lens of white Europeans from a couple of centuries ago, and instead see it through the lens of South Africans living under apartheid several decades ago.

To drive this point home visually, a small warning sign, emblazoned with the face of a German shepherd, hangs like a surveillance camera in the upper righthand corner of the poem. "ENTER AT YOUR OWN RISK," it reads.

Mokgosi, an associate professor at Yale University, engages with notions of colonialism, democracy and liberation across African history. In doing so, he draws deeply on his study of critical theory, philosophy, psychoanalysis and pop culture. His work confronts the complex politics of representation, insisting that dominant Eurocentric narratives be "supplemented," as the gallery guide delicately puts it.

"My interest in representation has to do with power because it is undeniably clear that there is a direct correlation between power and the production and dissemination of representation," Mokgosi writes in his artist statement.

To provide that representation, he uses exclusively texts from the works of African and African American authors. Sometimes these texts are mounted separately in a painting's periphery to provide a non-European frame of reference; elsewhere, the text is the piece, with the words enlarged to the size of an entire wall. In other works, Mokgosi includes fascinating handwritten annotations and commentary in the margins.

The works in the Main Gallery consist mostly of large pigment- and photo-transfers on canvas and linen. Mokgosi renders these 8-foot-tall scenes in a muted palette of white, gray, black and beige, with ample negative space. This contrasts nicely with a diptych of large, untitled charcoal drawings on paper, which depict night scenes with hardly an inch of paper showing through the charcoal.

Entering the West Gallery, the viewer is treated first to Mokgosi's breathtaking "Objects of Desire 6." Especially compared with the less figurative works and more somber tones in the adjacent gallery, this lush oil portrait of a woman kneeling in the grass seems like a luminous portal to another, brighter dimension.

The woman's expression, too, is arresting: hypnotic and inscrutable. With hands folded neatly over her striped skirt, she gazes calmly and assertively at the viewer — or perhaps just over the viewer's head, like someone who's assented to having their photograph taken by a stranger.

Directly to the right of this portrait are mounted several pages of scanned typewritten text. This is some of the most rewarding reading in the exhibit, especially for those who've studied art history or spent serious time in museums. The pages are vintage museum wall labels describing Picasso as an innovative genius who discovered all the "primitive," "magical" African art that would provide crucial inspiration to cubism and the art movements to follow.

If Mokgosi had simply scanned and reproduced these labels and installed them beside his own virtuosic painting — almost winking at the viewer — that alone would be a devastatingly effective juxtaposition. Instead, he goes the extra mile and annotates them.

The resulting notes are detailed, generous and occasionally hilarious, oscillating between academic rigor ("This discourse around the idea of the epiphany and genius is an important one to deal with") and righteous takedown ("How exactly was this 'collection' acquired?" "This wall label is meaningless, and conceptually and historically shallow").

"Woman Sitting," a massive 72-by-108-inch charcoal drawing, is another standout piece. Depicting what appears to be a young white boy sitting on a Black woman's lap, the drawing seems intentionally unfinished: Vast areas of negative space are left untouched, the geometric beginnings of other chairs just spectral lines. A vaguely menacing mood haunts this image. Beside the woman and the boy, a tall German shepherd sits faithfully, and a Black toddler appears to be playing with a pup in another room.

The opposite wall is hung with unframed political posters that deliver explicitly anti-colonial energy. "The people shall govern!" one reads. A 12-by-18-inch map of Africa is collaged with righteous faces and the words "YOU SHOULD BE SO LUCKY, ALL WE WANT IS JUSTICE AND NOT REVENGE."

Text and image have long been combined to illuminate, persuade, teach, illustrate and organize. For a social media-obsessed culture awash in ironic pop-culture memes, the posters Mokgosi includes offer the welcome and necessary antidote of earnest messaging.

German theater artist and poet Bertolt Brecht once declared, "Art is not a mirror held up to reality, but a hammer with which to shape it." Mokgosi's "Scripto-visual" shows us that art can be both of these things in the same moment.

The original print version of this article was headlined "Power Dynamics"