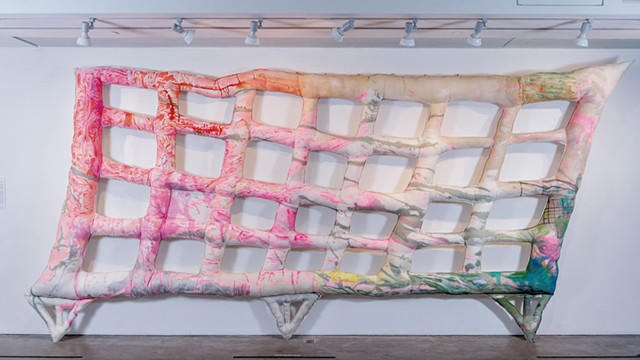 An appropriate warning to visitors of a current exhibit at the BCA Center would be "Don't squeeze the art." On the street level of the Burlington gallery, "Meg Lipke: In the Making" features the artist's soft works cut from canvas and painted and stuffed with polyester fill. Eminently huggable, they evoke shaped pillows or abstract stuffies. While most of Lipke's works are wall-hung, two are freestanding (with the help of hidden armatures), and one hangs from the wall and slumps onto the floor, extending into the viewer's space in a lumpy slouch.

Amusing and emotionally appealing, these pieces challenge the strictures of painting. Lipke is the daughter of Burlington artist Catherine Hall and late University of Vermont professor of art history Bill Lipke. In a recent Zoom webinar hosted by BCA curator and director of exhibitions Heather Ferrell, the artist explained that, after earning her MFA at Cornell University, she was a "very traditional painter" for a decade. Then she "hit a wall," she said, finding that the medium no longer excited her.

"Sometimes I find the history of Western painting really overwhelming," Lipke said at the talk. 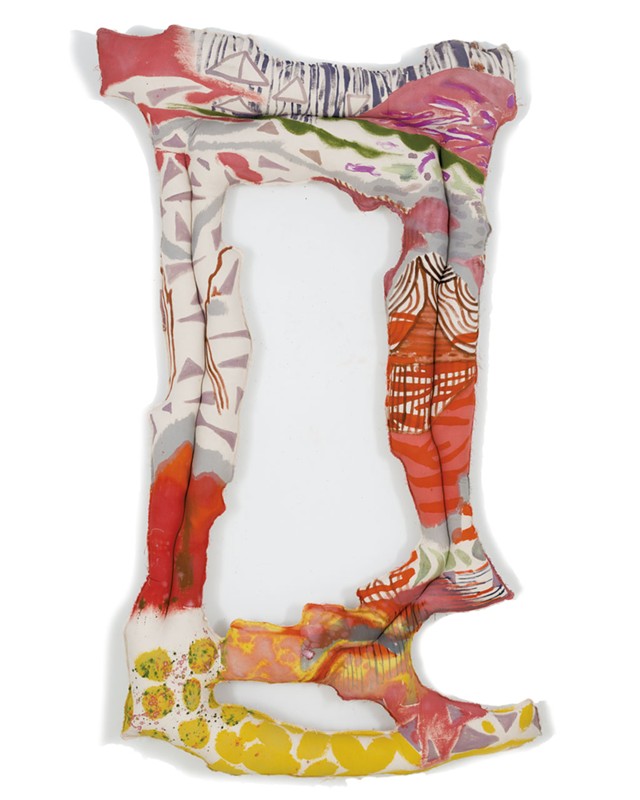 Her response was to shake up painting with craft. Inspired by her grandfather's textile mill in England and her grandmother's amateur artworks made from the mill's yarn, as well as her mother's multimedia practice, Lipke began to create works that reject the rigidity of painting. That's rigidity both in the literal sense — rectilinear canvases stretched over wood — and in the art historical understanding of the medium.

In "Black Cloud," an early wall-hung work from 2014 to 2015, she replaced a painting's traditional supports with polyester fill to craft a uniformly three-inch-thick work in the shape of a cloud. On its flat, painting-like surface, Lipke created a white-on-black pattern of lines and dots using a wax resist on fabric dye.

Subsequent wall-hung works show how Lipke moved away from the flat surface to a stuffed-limb look. In these "paintings," as she calls them, the paint — sometimes a riot of splashed color, other times a minimalist composition of lines and symbols in a subdued palette — curves around somatic volumes.

For "Loop Hoop" (2016), Lipke created a 59-inch-tall loop from the sleeves of her children's discarded coats. "Portal" (2017) is a complex form whose angles interlock around an oval hole. In her talk, Lipke explained that she based the shape on a cardboard Easter egg container that reminded her of her grandfather's color-sample cards from the mill.

"It's massive and unwieldy, yet it's about to run somewhere." Heather Ferrell tweet this

In the webinar, Lipke cited another inspiration: Eva Hesse's "Hang Up." The 1966 work, made with Sol LeWitt, consists of an empty frame and an absurdly long hanging wire that loops out into the viewer's space. Lipke makes a similarly ironic commentary on the history and act of painting with her work, but in reverse, by eliminating rather than exaggerating paintings' supports.

That lack of support structure makes "Slanting Grid," created for the BCA exhibition, particularly stunning. The stuffed muslin grid is eight feet tall and 18 feet wide. It hangs from loops over nails across the top; at least eight people were needed to wrestle it into place, according to Ferrell. Three triangular "feet" at the bottom only appear to support the work's weight.

"Slanting Grid" is a literal slant on the act of painting, a send-up of the traditional use of a grid to transfer an image to a canvas. Lipke references that practice by preserving one piece of canvas stretched across a hole in the grid, but the ebullient splashes of pink, red and green acrylic paint contrast with what is usually an exacting process.

Ferrell pointed out the humor of the piece's triangular feet and on-the-move slant. "It's moving toward something else. It's massive and unwieldy, yet it's about to run somewhere," she said. 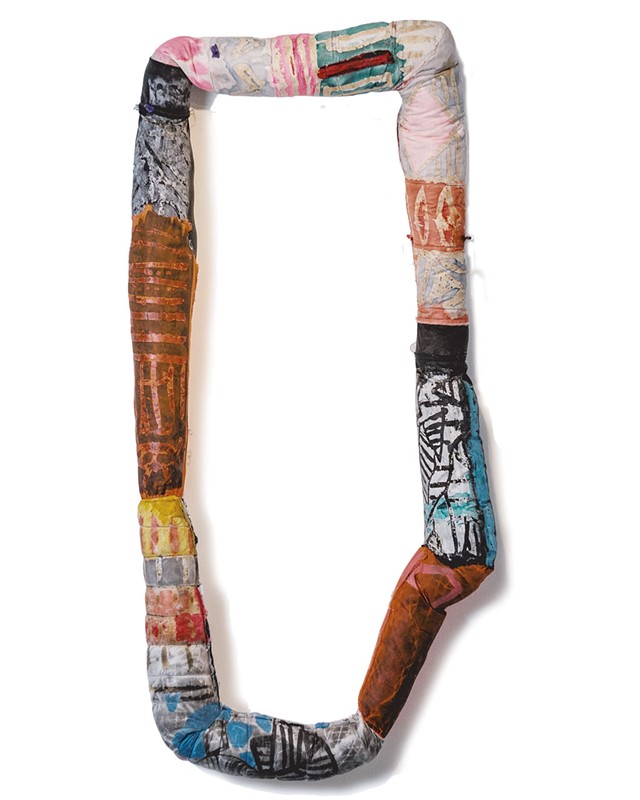 Gravity is a factor in Lipke's work, too. As Vermont artist Julia Kunin pointed out in a catalog essay for Lipke's 2016 exhibition at Freight + Volume in New York City, those looped sleeves recall amputated limbs. Other works "reference rescue and possible endangerment," Kunin wrote.

A feminist thread runs through the BCA show. "Parallel Bones" commemorates Lipke's 5-year-old daughter's broken elbow with sections of plaster and gauze wound around the stuffed forms. Her cheerfully painted "Mother Body" is a host of contradictions: With its vulva-like cutout at the center, it embraces a void and renders the interior of a woman's body vulnerable through exposure.

Indeed, if the tradition of painting can be shaken up at all, it might be through this kind of feminist — and feminine — practice.

Lipke's favorite piece is the stunning 84-inch-tall "Dream of a Painting," she noted in her webinar. (It's this reviewer's favorite, too.) With its fluid form approximating a double frame that splits along the bottom, the work frames a negative space in rich hues of red, orange, yellow and pink. Such a lush gesture makes the blankness at its center all the more intriguing, like an invitation to an unknown future — for both an important emerging artist and her medium.

The original print version of this article was headlined "Soft Power | Art review: "Meg Lipke: In the Making," BCA Center"