The Hall Art Foundation in Reading, a premier venue for contemporary art in Vermont since it opened in 2012, is trying something new this year: an exhibit of recent works by Vermont-based artists that are offered for sale. The show is called simply "Made in Vermont."

The foundation's southern Vermont location — there's another in Derneburg, Germany, and a third at the Massachusetts Museum of Contemporary Art in North Adams — consists of a campus of three barns, a stone farmhouse and a clapboard home. Each building dates from the 19th century and has been beautifully restored and landscaped.

The foundation has previously shown only works from its own collection and the private collection of its founders, Andrew and Christine Hall. Together, these holdings comprise more than 5,000 works by internationally renowned artists such as Damien Hirst, Jeff Koons, Olafur Eliasson and hundreds more. Invited curators cull the holdings to create temporary exhibits, which run from May through Thanksgiving Day.

"Made in Vermont" adds seven local names to the array of artists on exhibit: Mark Barry of North Bennington; Mildred Beltré, a University of Vermont studio art professor based in Boston; Patrick Dunfey, whose studio is in White River Junction; Terry Ekasala of West Burke; Richard Jacobs of Putney; Sara Katz of North Ferrisburgh; and Joseph Wheelwright, a Boston-based artist who made sculpture in his East Corinth foundry and died in 2016. 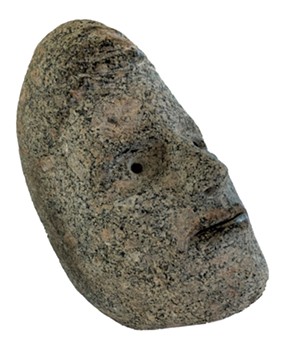 Habitués of the Vermont art scene will wonder: Why these seven? Some became known to the Hall through visits, according to Maryse Brand. As the foundation's director since 2013, she selected the artists in consultation with the Halls. Others were recommended.

One artist, Beltré, was included in last year's show "Ready. Fire! Aim.," a collaboration of the Hall and Burlington City Arts, in which works from the Hall showed in Reading while a companion exhibit of responses by Vermont artists showed in the BCA Center. Though she didn't curate that show, Katz is BCA's assistant director. Of these seven Vermont artists, Jacobs is so far the only one the Halls have personally collected.

Another consideration of the curators may have been the space. "Made in Vermont" is mounted in the reception center — the clapboard house — where visitors meet up with docents on Saturdays and Sundays at set times. (The Hall is otherwise open only on first Fridays, when viewers can wander it unguided.) The well-lit reception area is small and intimate, with couches and a table lined with Hall publications from previous exhibitions. There's just enough wall and floor space to fit the 15 works on display.

Entering, one observes a small granite head on a pedestal to the right of the door that appears to gaze at the stars, its neck gracefully craned. Wheelwright's "Gentle Stone" is a 13-inch-high, streamlined, almost moderne form, unpolished but for its lips, that seems to thrust upward. Drilled holes for eyes create an intense gaze, and the gender-neutral face is animated by being slightly askew. Otherwise, it's almost unaccountable how alive this stone piece appears.

Wheelwright's other works on display are bronze, including a pockmarked ovoid head called "Cratered Moon" and four sticklike figures. The latter could be mistaken for sculptures made from actual sticks, and, in fact, Wheelwright created them from casts of tree branches. With their subtle facial features welded onto expressive natural forms, "Running Man," "Dancing Couple" and "Dog" capture the same uncanny animation as "Gentle Stone" does.

Katz is the only other artist with multiple works in the show. Her four 12-inch-square acrylic and mixed-media works on paper are studies in abstraction and color, though her blues, pinks and golden hues are heavily accented with streaks of black. These pieces appear well worked over and seem to hint at industrialization. "Meadow Dusk," for all its colorful foreground shapes, is dominated by a series of tall black strokes that suggest distant smokestacks.

Jacobs' "Tortoise and Hare," in oil on clayboard, is even more heavily worked. Its two abstract forms pop on a background that appears white, though closer examination reveals complexities. Shades of underlying color riddle the white, which is painted laboriously around the colorful abstract forms. These are rendered using all manner of paint application, including, it seems, airbrushing and scraping. The title references the competing modes of the artist's working processes: "fast gesture and slow contemplation," according to the show's brochure.

Barry and Ekasala each contributed a figurative work, in vastly different styles. Ekasala's "City of Dreams" — the only work made specifically for this show — uses the rough outlines of architectural elements and buildings to portray a city in pastel hues; a black strip along the bottom of this 40-by-54-inch oil-on-linen work suggests the vista is seen through a window. Central in the composition is an arch that suggests a portal to the sunlit cloudscape behind.

Barry's "Night Owl" depicts, in a faux-naïf style, a purple-quilt-covered bed inhabited by a couple and their black dog. The blanket, in near-flat perspective, fills almost the entire canvas and covers half the head of one sleeping figure. The other, wearing glasses, gazes with furrowed brow at a glowing Apple laptop. The artist says he paints "seemingly ordinary moments in life that aren't ordinary at all." One wonders which alarming news moment this 2016 painting portrays.

Viewers of Beltré's three pieces on display at BCA last year will recognize her work's confluence of geometric forms, wordplay and racial issues in "Black Brown Shine." The work, in ink and color pencil on paper, appears to depict an interlocking assemblage of colorful, blocky shapes reminiscent of the early video game Tetris — the L-shape, the cube, the bar and so on. That is, until the words of its title emerge. "Shine" is spelled in white shapes down the center; on either side, "Brown" and "Black" are both rendered in brown. Beltré aims to meld activist art and abstraction to inspire new ways of seeing.

Perhaps because of its proximity to that piece, Dunfey's ostensibly simple "Knot" appears a little ominous. The tempera-and-gesso composition on paper suggests a tree that was once a tangle of limbs, all of them now severed to create a multiarmed stump. Entirely rendered in red lines against a black background, the piece seems apocalyptic, as if to suggest a fire, and a small black cross adorns the red lines of one severed surface. Two red paint drips may or may not be accidental.

Dunfey's show at White River Gallery last year left another Seven Days reviewer noting that his work "suspends the viewer between comfort and unease." This reviewer veered toward the latter.

At 60 by 50 inches, Dunfey's is the largest piece in the show — and the most expensive, at $10,000. Prices range down to $500 for each of Katz's works. The Hall is selling the works on behalf of the artists, says Brand, in this inaugural effort to act as a commercial gallery.

She adds that doing the show "has been so illuminating, because there are so many artists doing great work in Vermont. We could just keep doing variations of this show year after year." Will they? "We'll see," says the director.