Art Review: 'Locked Down! Keyed In! Locked Out' Keyed Up!' at Museum of Everyday Life

Visitors to this exhibition enter it by unlocking a door, behind which they discover three more locked doors. Aside from a faint sound of running water, nothing hints at what is behind them. A key hangs beside each, offering the curious a way in. The choice recalls the legends — and game shows — in which people must select the door to their destiny, where one door may lead to bliss, freedom or wealth, the others to disappointment, danger or death.

"We inevitably find it necessary to hide and protect ourselves and our belongings from one another, and to contain and control what we deem to be ours," reads the exhibition statement for "Locked Down! Keyed In! Locked Out! Keyed Up!," written by Museum of Everyday Life "philosopher-in-chief," director and curator Clare Dolan. Behind these doors lie installations that examine locks, keys and the various exclusivities they engender.

MOEL focuses on exploring the wonders, weirdness and history of everyday objects. It's housed in an old dairy barn outside Glover, not far from the home base of Bread and Puppet Theater, with which Dolan is also involved. For "Locked Up," she adapted the usually open barn space to fit the theme by installing rooms with locking doors.

A cozy room filled with lockable objects of love and lust greets those who open the middle door. Locks and keys have their fetish appeal, but Dolan avoids obvious B&D props; instead, she has set up a display of the history of the chastity belt. 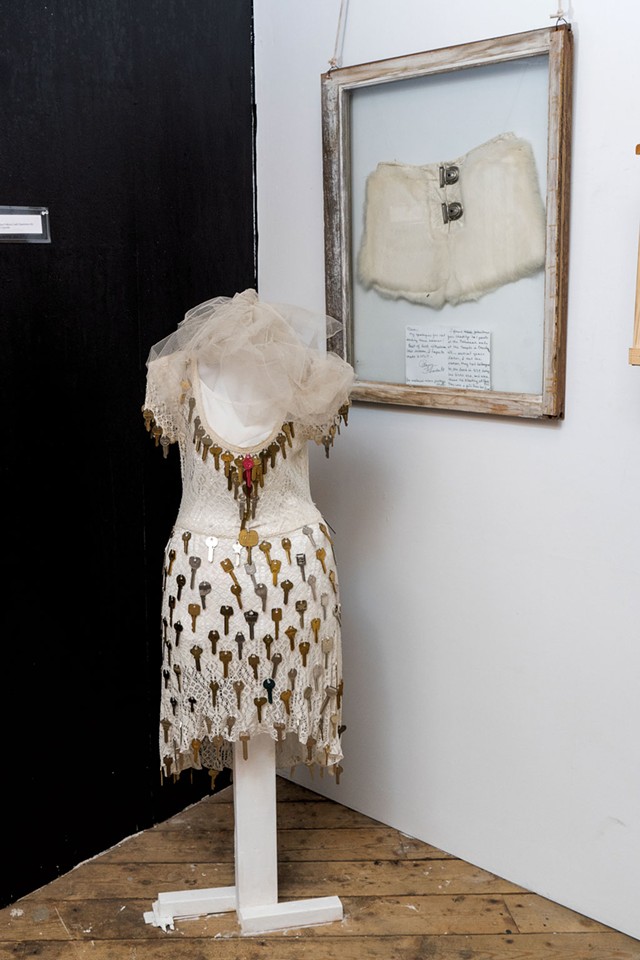 The installation cites research from the Pratt Institute attesting that chastity belts, rather than having been commonly used during the Middle Ages, were actually "often forgeries" concocted by 18th-century satirists. Accompanying this information is a playful peephole display that includes a scene of a severe-looking older man unlocking the chastity belt of a younger woman who wears pearls. She appears bored. A pair of white leather fetish pants, complete with a locking fly, hangs on the wall. An explanation tells us the garment originated in the "disco era" in New York City.

Nearby, the installation "Locking Suitcases" invites visitors to write down a secret and place it in a suitcase with a small slot on top. Paper and pencils are provided, and a sign encourages visitors to "Say goodbye to it with a shot of something strong." A bottle of Bushmills whiskey and a golden-hued shot glass of questionable cleanliness make that possible.

What will the curator do with the visitors' collected secrets? In a phone interview, Dolan, 51, said that, when the exhibition concludes next spring, she'll read them each once, then ritually burn the lot. Dolan, who also works as a nurse, said she likes "the idea of the museum offering some ethereal, hard-to-define and also hard-to-find services."

Many other pieces in "Locked Down" entice museumgoers to participate. In "Locking Diaries," they're invited to write in a '90s-style pink-and-cream locking diary with a broken spine. "I haven't washed my sheets since October. Will I ever find love?" reads a July entry by "Jake."

Locks and keys physically delineate the private from the public. Behind another door is an installation titled "Gramercy Park," modeled after the gated and locked Manhattan park whose exclusive key holders are wealthy residents. An entire corner of one wall is covered by a painting by Theresa Peura of the park in springtime, to which Dolan added a gate, a functional fountain and a copy of the actual park's rules.

Commercial photography and video recording are on the extended list of activities banned at Gramercy, so the installation offers no photographs of its interior. There is, however, an entertaining recording of an interview Dolan conducted with a sassy park trustee, Arlene Harrison, along with a collection of old, nonfunctional keys to the park.

When museums display objects in isolation, they always run the risk of obscuring their real-life contexts. Worse, some museums sensationalize socially or historically weighty pieces to tantalize viewers, such as instruments of death, torture and incarceration. Dolan recognized she ran such a risk with MOEL's "Imprisonment" installation, which lies behind the last of those initial three doors. She was intent on not "carnivalizing" the subject matter, she said, and she succeeded.

Crucially, "Imprisonment" isn't set up to look like a jail cell. On its wall is a poem, "These Locks That Lock," written in black marker on white paper by an unnamed participant in the Writers for Recovery program at Vermont's Southern State Correctional Facility. Nearby are rusted iron shackles. They appear to be hand-forged, sized to fit someone with wide wrists and ankles.

The opposite wall holds a display of zip-tie handcuffs, contemporary devices that police can use as instant restraints against demonstrators. A copy of Michelle Alexander's The New Jim Crow: Mass Incarceration in the Age of Colorblindness sits on a pedestal in the middle of the installation. Another wall offers information and statistics on imprisonment in Vermont, attributed to Vermonters for Criminal Justice Reform. Among them: Vermont has a higher rate of incarceration (per percentage of the population) of black and brown men than any other state.

This isn't the first time MOEL has displayed objects related to incarceration. An exhibit about matches, in 2011, featured stringed instruments that an imprisoned musician had constructed from matchsticks. "Toothbrush," in 2014, included a re-created prison shank. And last year's "Bells & Whistles" featured police whistles.

"Imprisonment" is appropriately bleak, with bad lighting and poor air circulation. Upon leaving this installation, the museumgoer obligingly closes and relocks the door, the prison once again out of sight.

The exhibition continues into an open area outside the locking doors, where visitors can stroll and examine wall displays. An array of intricate brass padlocks from around the world includes ones shaped like lions, cats, turtles and fish. Artist Leah Frost created a nifty-looking replica of an early Egyptian wooden lockpin.

Locked spaces signal that something valuable is hidden away, tempting outsiders to enter and try to obtain it. Accordingly, another MOEL installation features a collection of lock-picking devices and manuals — some of which, Dolan said, have been stolen from or moved around the museum.

The "Lovers Locks" installation contains pictures of bridges adorned with padlocks placed by lovers as physical mementos of their purportedly steadfast commitment. Critiquing such rigid notions of love, the display also offers an alternative: a "nomadic parapet" made of colorful strings. Visitors — single or otherwise — are invited to cut a piece of string, consider its flexibility and tie it to the parapet, knowing it could end up joined to other pieces of string there. The piece is a lighthearted counterbalance to the restrictive connotations of locks, a reimagining of love based on changing connections.

Daring artwork challenges the context in which it is made. While the nomadic parapet doesn't necessarily advocate for a world free of locks and keys, it is a playful vision of a realm beyond them.