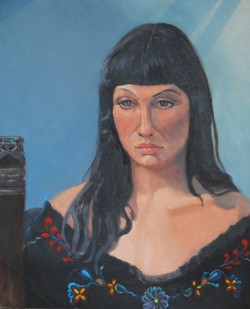 Vermonters don’t have quite as many opportunities to people watch as, say, New Yorkers riding the subway. Still, who hasn’t found themselves making up stories about strangers occupying the benches at the bus stop or standing in line at the grocery store?

In the little Blinking Light Gallery in Plainfield this month, Lark Upson’s oil portraits offer an unexpected opportunity for just such flights of fancy about unknown people. The Marshfield artist’s richly colored paintings are small and unframed, but arresting — who are these people, and what are they thinking?

There’s the shorthaired black woman with long, gold earrings and generous cleavage who appears to be watching some mischief unfolding to her left. A shadow cuts abruptly across her neck and shoulder as she stares askance. Is she at a cocktail party, eavesdropping on an ex-lover’s flirtation with someone new? Is she a busy mom, her eyes trained on a roughhousing kid?

There’s the high-cheek-boned young man with searing, ice-blue eyes and impossibly plump lips who looks like he stepped out of Middle Earth. His cold, studied expression makes him look like he’s just committed a crime.

There’s the pissed-off-looking, clean-cut man with caramel-colored skin, a dark widow’s peak and deep-set eyes. What did someone say to make him scowl so?

And there’s the handsome, roguish young man whose scruffy brown beard hasn’t quite grown in all the way, staring directly and innocently at the viewer.

“They come right off the canvas to me,” says Ricka McNaughton, who handles publicity for the cooperative gallery. It’s a diminutive exhibit, just 10 small paintings hanging from wire on a pale-yellow wall in a sunlit corner of the gallery. But the faces are worth lingering over.

And it’s not just their intriguing expressions. Each painting holds its own with a kind of structural integrity — which, as it turns out, is the title of the show — perhaps due to Upson’s former career as a designer and builder of homes and furniture. She began painting in 2007.

Upson, now in her sixties, has always been artistic. Her mother, a painter and sculptor, encouraged her daughter to pursue painting from an early age. When the rest of the kids were learning Latin, Upson recalls, her mother called the school and argued that it was a dead language and not worth learning; Lark should take art instead.

Upson’s creativity was also influenced by her father, a custom house builder. “I was really tight with my dad, and we would go out and check on his various job sites,” she says. “I think I had this fascination with the carpenters.”

In her thirties she studied residential construction at the North Bennett Street School in Boston. Soon thereafter she began redesigning and remodeling houses, including, eventually, the English-style cottage she and her husband, journalist Jack Hoffman, live in in Marshfield. The fairy-tale home, which is appointed with Upson’s furniture and handcrafted trim, was featured on the cover of Better Homes and Gardens in the late ’90s.

About six years ago, she gave up her business, Lark Upson Design, for two reasons: the tanking economy and the arthritis in her hands. She turned to painting. These days Upson says she’s “hooked” on portraits. “I do it all day, every day,” she says.

She began her practice when she was invited to join a group of painters who meet at artist Joan Feierabend’s studio in Tunbridge. The group of seven painters gathers regularly for live-model sessions. That’s where Upson’s people — the elvish man, the buxom, gold-earringed woman — sit and wait while she captures not just their likeness but something of their personalities. “You could say that she doesn’t capture human presences so much as conjure them,” writes McNaughton about the portraits.

To Upson, it’s all about the fundamentals. When she was building furniture and houses, she says, she followed her “love of design, love of pattern. Now I’m really heavily into light and color.”

When it comes to those qualities, one portrait in her Blinking Light show stands out. It’s of a young white woman with a buoyant brown mane held back with a red sequined headband, which reflects the light from some unknown source. Her green eyes are wet and alive, her red lips tightly drawn together. She stares directly and intensely at the viewer, as if in a standoff. And it’s difficult to look away.

Luckily, you don’t have to. This isn’t the bus stop, or the grocery-store line. No need to readjust your gaze when you’re caught staring.

“Structural Integrity” is at Blinking Light Gallery in Plainfield through September 1. blinkinglightgallery.com

The original print version of this article was headlined "Face Time"