After three decades of trying to make it as an artist in Vermont, Kit Donnelly is giving up and moving to — of all places — New Jersey. Her destination, however, is not the northern Jersey of chemical plants, the six-lane turnpike and "The Sopranos." Donnelly is moving to the Victorian town of Cape May at the state's southern tip, where some of her family members live. And she plans to cross the Delaware to scout out the gallery scene in Philadelphia. It's Vermont, not painting, that Donnelly is leaving behind.

At 52, Donnelly — not to be confused with prominent Burlington artist Kate Donnelly — says she has found life hard in a state where only a tiny fraction of artists earn more than a few thousand dollars a year from sales of their work.

Vermont has been challenging for Donnelly on other levels, too. For several years, she lived with her then-husband, musician and composer Michael Chorney, in a Lincoln cabin with no running water. Later, she raised two children as a single mother in a mountaintop community known for a boho culture that developed partly as a result of its remoteness.

"Being an artist can be very isolating," Donnelly said recently as she previewed her farewell retrospective at Bristol's WalkOver Gallery. Her geographic and domestic circumstances only increased that isolation. "I've never loved Vermont's winters," she added.

"It was difficult to get to shows, even in Burlington. I wasn't staying in touch with what was going on," Donnelly lamented.

But it wasn't as though Donnelly never left Lincoln. "I've been very active with BCA [Burlington City Arts]," she noted; she has also taught at Shelburne Craft School and the former Frog Hollow outlet in Middlebury.

Nor was Donnelly always apart from the Queen City's gallery scene. "I did well there in the '90s," she said. "I had a pretty big following in Burlington."

But the Church & Maple Gallery where she showed went out of business, like so many art venues in Burlington.

Donnelly eventually came down from her mountain of solitude. Ten years ago, she got a job as a legal assistant to public-interest lawyer Jim Dumont, then moved to Bristol two years later. Life got easier materially, if not artistically. 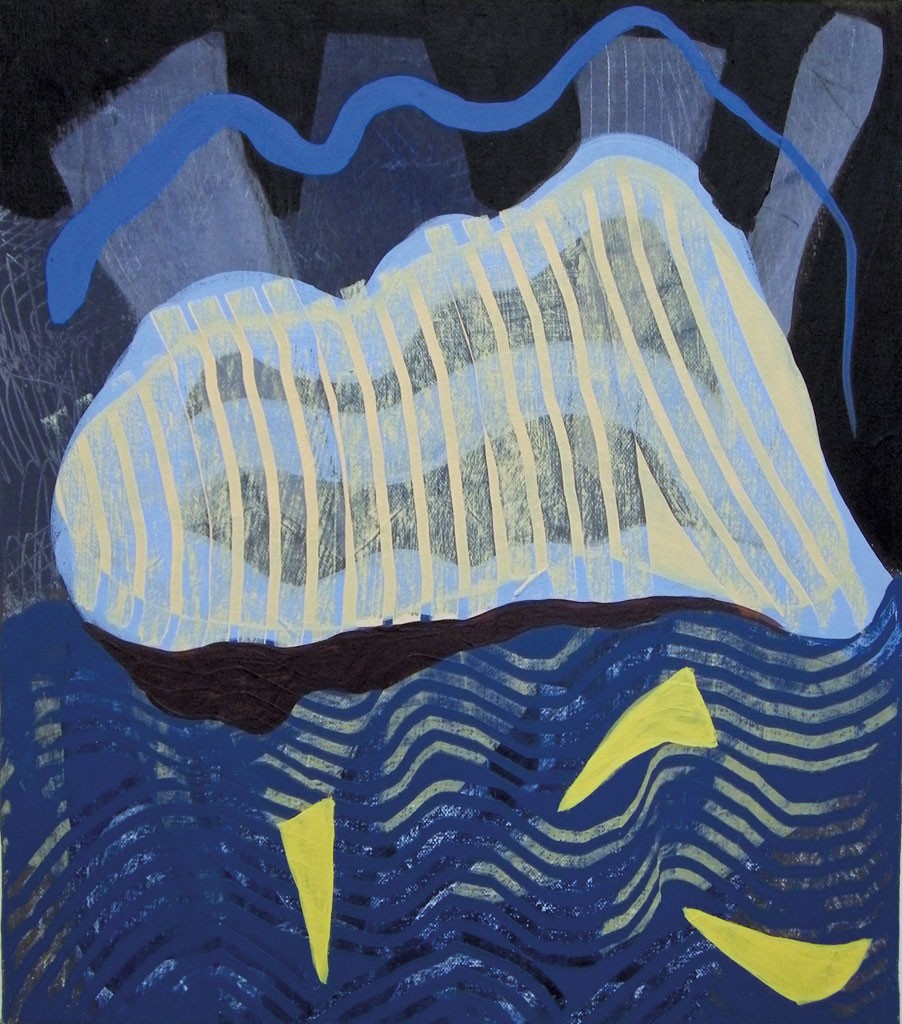 "I was stuck," Donnelly said of the style she had gradually developed. By 2007, "I was relying on stuff I had already done. I just didn't have the mental capacity at that point to challenge myself."

After doing her undergraduate work at the Portland (now Maine) College of Art and the San Francisco Art Institute, Donnelly followed Chorney to Vermont, where she began her career making representational work. She drew dancers at ballet classes taught by Middlebury-area choreographer and performer Patty Smith. Two oil paintings that resulted from those pieces on paper are the first works that visitors encounter at the WalkOver show, which presents 22 works in chronological order.

Perhaps no one can paint ballet dancers without evoking in a viewer's mind images of Edgar Degas' pastels, oils and bronzes on that theme. The comparison isn't flattering to these early efforts by Donnelly. Her large-scale, almost life-size male and female dancers appear chunky, awkwardly positioned and anatomically incorrect.

Her art became more aesthetically pleasing as Donnelly moved toward the realm of abstraction. The pieces she initially produced during that transition retain readily readable references to the natural world, such as trees, rocks, clouds and insects — although the streaking forms in the painting "Fireflies" look more like sperm than lightning bugs.

Ideas for her compositions come from frequent walks in the countryside, during which "I collect information," Donnelly said. She paints from memory, not from photos or en plein air, allowing the imagery she encountered on her treks to be sifted and rendered in new ways as she works.

Donnelly's move away from representation coincided with a shift in medium — from oil to acrylic. "I had a baby and didn't want to be working with oil at that time," she explained. As for her departure from representation, it was motivated in part by a desire to dispense with the "emotional baggage" that both artist and viewers inevitably bring to recognizable subject matter, including landscapes. Even so, Donnelly said she found it "really hard to go abstract."

Kandinsky's pioneering evolution toward nonobjective painting clearly served as an inspiration. The progression in Donnelly's art is similar to his — from geometric shapes to more organic forms that don't refer to anything recognizable.

Discussing pieces composed of jutting shards, floating globules and multicolored swirls, Donnelly acknowledged that debt to Kandinsky. She also cited van Gogh's palette and botanical works as a takeoff point for a painting in which fringed, leaflike objects thrust toward one another across a yellow divide. Some of Donnelly's other paintings show similarities to the styles of big names in American art history such as Arthur Dove and Georgia O'Keeffe.

What's particularly impressive about O'Keeffe, Donnelly said, is "her execution of line, how the shapes meet in her paintings."

If Donnelly's work sometimes recalls that of other artists, it can't be considered derivative. A strong grounding in the formalist aspects of painting has given her a self-confidence that fosters originality. "I know what colors work together, and what I'm supposed to do with them," Donnelly said. "I'm trying to make every mark count."

Yet the artist remains unsatisfied with her work, regarding it as somehow unconsummated. "I haven't found my voice yet," she said. Maybe she'll discover it in New Jersey.

The original print version of this article was headlined "Looking Homeward"