Boston-based artist Katrine Hildebrandt-Hussey introduces "Vessel," her solo show currently at Soapbox Arts in Burlington, with a confessional artist statement. She produced the work in the show over the past year, she writes, as a way to overcome the depression she has felt over a lifetime and particularly during the pandemic. In her words, "The work became visual mantras and metaphors for the challenges I was experiencing."

Mantras can be vehicles for healing, while metaphors illustrate something — in Hildebrandt-Hussey's case, the challenge of feeling "empty and hollow." The show reminded this reviewer throughout of another artist, Agnes Martin (1912-2004), the reclusive minimalist painter whose precise graphite grids helped her wrestle with her mental illness even as they expressed that struggle. 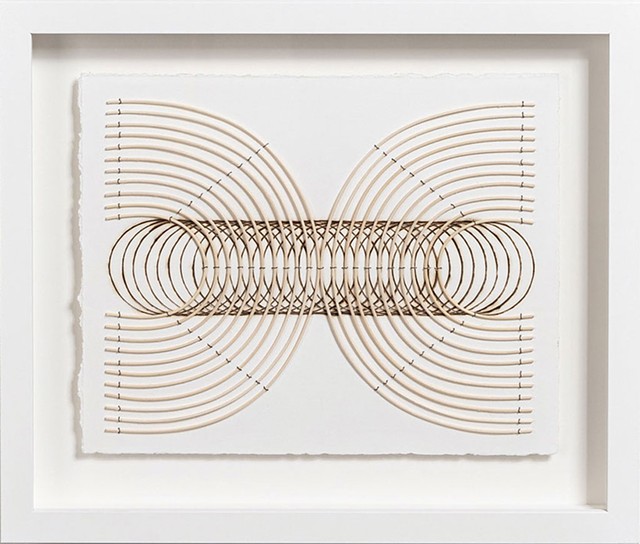 Hildebrandt-Hussey's 15 works on paper are distinctly her own, however. For one thing, she created their repeating lines, spaced at precise intervals, with a wood-burning pen with an electric tip. That tool is more typically used by sculptors — and, in fact, the artist earned her MFA in sculpture from the Massachusetts College of Art and Design. To create these pieces, she mapped out her designs in pencil using a compass and other tools, then drew (or, rather, burned) each line freehand like a painter.

A training in sculpture might also account for Hildebrandt-Hussey's interest in the illusion of three-dimensionality. In "Aligned Bend," one of the smallest works in the show at 11.5 by 13.5 inches framed, repeating circles arranged in a semicircle evoke the form of an arched Slinky toy. 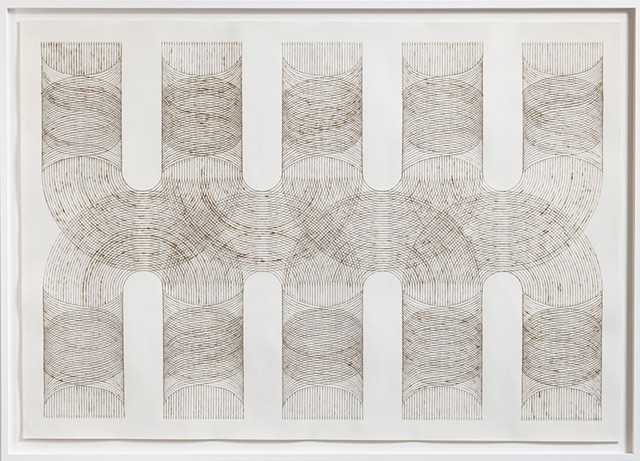 "Tunnel" — among the largest works at 46 by 64 inches framed — appears to represent just that, though it is composed entirely of distinct circles overlaid at precise intervals. These give the illusion of a tube, open at both ends and arranged in a series of geometric bends.

In her work, Hildebrandt-Hussey pares color down to the absolute minimum: brown lines burned on white paper and, occasionally, lines of a lighter brown. The latter turn out to be reeds, pinned to the paper at exactly spaced intervals with bits of wire. The burned lines are not as precise; brown "stains" appear where the artist's steady hand slowed or pressed infinitesimally. These imperfections add a kind of visual texture. 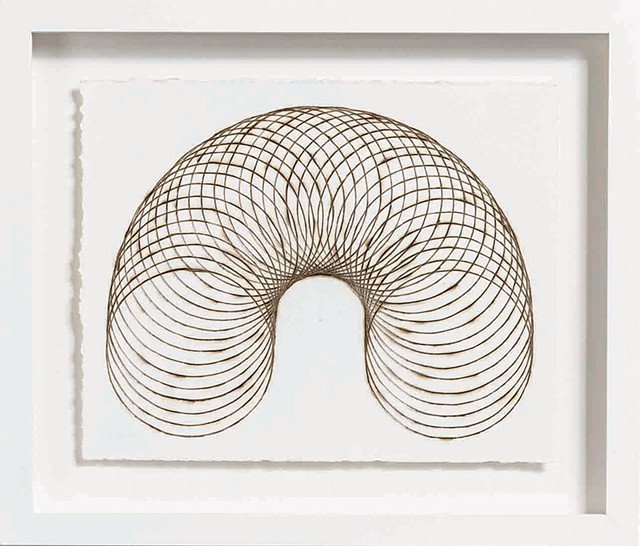 Some works are made entirely of reeds. "Flex," for instance, bends seven parallel reeds into a riverlike formation. In a few pieces, such as "Channel Through," reed lines are laid over burnt lines, creating complex intersections. The reeds of "Sift," overlaid on a burned-line pattern of triangles, are so precisely joined into circles that it's impossible to spot their ends.

Soapbox Arts owner Patricia Trafton has hosted some colorful shows in her white-box gallery since she opened in March 2019. Among the 16 artists she represents are Wylie Garcia, a fearless experimenter in color, and Will Gebhard, who produces boldly graphic abstractions in Bauhaus-like color schemes. For Hildebrandt-Hussey's work, Trafton painted two accent walls for the first time. Their dense gray effectively sets off the neutral-toned works and highlights their emphasis on form and repetition. 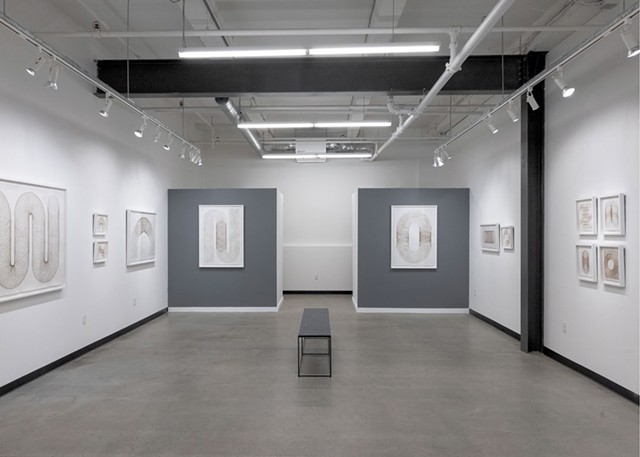 "I feel like color [in the work] would be distracting," Trafton opined during a visit.

Unlike grids, which suggest stasis, Hildebrandt-Hussey's patterns convey a sense of movement: waves, channels, tubular pathways. The patterns can be as soothing for the viewer as they apparently were for the artist. "Breathe," for instance, evokes lungs with its two vertical lines of ovals, their tops oriented so that they appear to lean against one another.

Or the patterns can feel less sanguine. "Wound & Bound" is a large work whose concentric ovals approximate a many-laned track seen from above. On each straightaway, the artist added layers of S-curve lines that appear to bind or grip the oval form by its sides.

The work may be meant to evoke the circularity and suffocating grip of pandemic existence, or it may signal the seizing of control over that insanity. Either way, viewers will likely relate to the artist's need to act — and to share the results of her practice.

"We are all vessels that require love and kindness, empathy and joy," Hildebrandt-Hussey writes. And, one might add, art.

The original print version of this article was headlined "Quest Patterns"