It's a brave contemporary artist who sets out to render large-scale likenesses of exotic and glamorous birds. The work will inevitably be compared with that of John James Audubon (1785-1851), whose life-size drawings and watercolors of 497 species, reproduced as prints in The Birds of America, endure as an unparalleled achievement of art and ornithology.

Undaunted, Judith Vivell is showing a suite of a dozen monumental bird portraits in the lobby of the Vermont Supreme Court in Montpelier. Her skillful oil paintings differ from Audubon's work in both their manner of execution and their intent.

Audubon was as much a naturalist as an artist. He sought scientific accuracy in his detailed depictions, with the ambitious objective of cataloguing the North American aviary — initially for an amazed British audience. Audubon could be expressive in the poses he chose for his subjects, but it's each bird's intricate details and rendered habitat, not Audubon's own artistic interpretation, that consistently takes precedence in his work.

Vivell is also a realist. She paints with great exactitude, expertly capturing the anatomy of long, looping necks and broad or pointed bills. The texture of feathers and subtleties in plumage colors are beautifully represented as well. 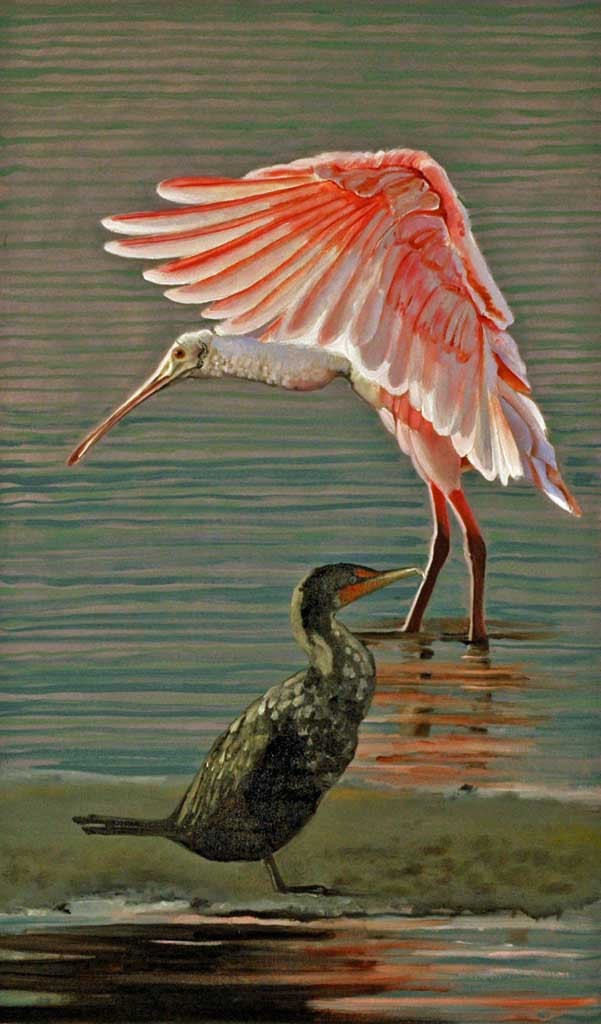 But Vivell is much more an artist than a naturalist. To her, birds primarily offer opportunities for aesthetic expression. In a statement introducing the Supreme Court show, Vivell notes that her training in the early-1960s New York art world, where gesture was everything, taught her that "art is not about documenting existence, but something far more ambitious; the subject of modern painting is expression itself."

It's a lesson she has transported from her SoHo studio in Manhattan to her summer home in White River Junction — and from her grounding in abstraction to her later fascination with creatures of the sky.

Eschewing Audubon's tendency to dramatize his subjects, Vivell makes no attempt to give her birds personality traits with which humans might identify. From this dispassionate, distanced perspective, she is able to convey the otherness, the fundamental strangeness, of beings quite unlike ourselves. Vivell's birds are entirely self-possessed. They seem to preen, but also appear wholly indifferent to human observation. It's clear they can get along just fine without us.

Vivell's birds are disconnected from their natural surroundings, too. The artist offers a suggestion of grass or water in a few of the paintings, but in most the birds appear against a neutral, monochromatic background that serves to focus attention on the birds alone.

In her 5-by-9-foot triptych showing a flock of American white pelicans, Vivell manages to distinguish the birds' grayish-white feathers from a grayish-white backdrop by giving the latter a faintly rosy glow. Although this three-part piece doesn't fold, it resembles a Japanese screen painting in both its stylized subject matter and its elegantly minimalist composition.

At $20,000, the pelican triptych carries the heftiest price tag in a show whose least expensive items are offered at $8,500. Vivell is no amateur, and the pricing of her work is commensurate with her professionalism.

Her painterly effects can be utterly exquisite. Translucent feathers dangle like gossamer from the sides of a great white heron that crouches on a log against a mauve backdrop.

The speckled cormorant in the foreground of another work stands as a pedestrian foil to a roseate spoonbill with unfurled pink-and-white wings. One of a pair of Eurasian spoonbills on joined canvases shows off similar coloring as it balances balletically on a partly submerged foot and pecks delicately at its neck feathers. Its stilled companion turns toward the viewer but doesn't seem impressed by what it's seeing.

And then there's the bare-throated tiger heron with feathers that look like elm leaves, and a whooping crane that seems more furry than feathery. This latter piece is unusual in the show because the bird plays a supporting role to a larger element: finely veined lotus leaves accented by sunlight and shadows.

But a full-frontal depiction of a red dish egret qualifies as the show's least typical painting. With black streaks dribbling down from the bird's tail feathers and scratchy scribbles on its chest, this specimen is much less kempt than the other 11. The egret's punky hairdo enhances its appeal.

It should be noted that technology enables Vivell to work far more humanely than did Audubon. She captures her subjects with a camera before transposing them onto canvas; he shot birds with a gun before posing them in his studio with thread and pins. Tens of thousands of birds were sacrificed to Audubon's art. Vivell doesn't ruffle her birds' feathers, although she does warn us in her artist's statement of "the bald fact of their likely annihilation."

The original print version of this article was headlined "Wing Woman"