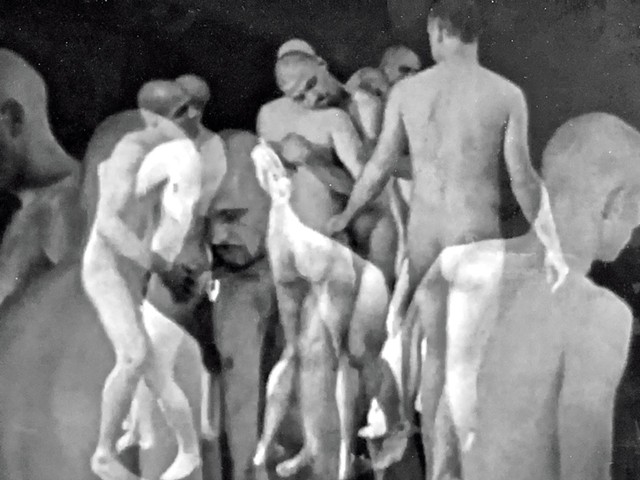 John Killacky is primarily known to Vermonters as the executive director of Burlington's Flynn Center for the Performing Arts, a position he assumed in 2010. In person, he's a gentle, poetic soul, quick to express appreciation for those with whom he works. Some may have read about Killacky's beloved Shetland pony, Pacific Raindrop. Others may know that he is a practicing Buddhist, or that a misstep during a 1996 surgery left him paraplegic.

A newly opened exhibition at Burlington's Champlain College Art Gallery offers another view of Killacky: as an artist deeply engaged with the body in all of its joys and betrayals. "Embodied Voice: Video Narratives," curated by Dana Heffern, presents Killacky's video oeuvre, eight short films made between 1993 and 2016. This is the first time all the films have been exhibited together, and a particularly fitting moment for the exhibition, as Killacky will be stepping down from his position at the Flynn in June.

Those who have previously visited the Champlain College gallery will find a different configuration for this exhibit: A thick black curtain has been installed between the gallery and the adjoining hallway. As Heffern put it at last Friday's reception, she and Killacky worked "to create a sacred space that would hold the viewer."

Inside the gallery are three monitors with headphones. Speakers play audio selections from the films, so that a listener may feel Killacky is narrating the gallery experience. A screen on the gallery's back wall loops his two most recent works: "Dreaming Awake," made with Burlington artist Todd R. Lockwood in 2016; and "FLOW," a 2017 collaboration with Burlington filmmaker Art Bell.

On either side of these latest videos, a monitor loops three more films. To the left are works Killacky made in the early '90s as tributes to friends and community members lost to the AIDS epidemic. These are included in the New York Public Library's AIDS Activist Videotape Collection 1985-2000. To the right are disability-themed pieces featuring Killacky and five other artists.

Made between 1993 and 1996, the AIDS shorts are unapologetic, devastating works of mourning. The first, "Unforgiven Fire," was made in collaboration with Steven Grandell. Before any image appears on screen, Killacky's voice recites the names of the dead with the steadiness of a metronome. Grainy, pixelated footage of Killacky reading about his fallen friends — their ailments, feelings of shame, goodbyes that never happened — is cut with a symbolic scene of mythological proportions, shot on 16mm. In it, a naked Killacky slumps against a wooden pole that suggests a cross. Blood slowly and rhythmically drips from above onto his corpse-like body.

As the screen goes black and the film ends, Killacky is still reading names — he lost more than 100 friends to AIDS.

"Stolen Shadows," also made with Grandell, tells the story of Killacky assisting a friend, Henry, with his suicide. The narration is voiced over a simple, stark domestic scene. Killacky, in a loose white bathrobe, rocks back and forth in a rocking chair beside an empty bed: the lovers' bed, a nighttime respite and a final resting place all in one.

The disability-focused works similarly grapple with experiences of physical helplessness, chronic pain and processing trauma. In 2003's "Dreaming Awake," Killacky speaks of fighting with his own limbs, rendered unreliable by surgery. Images of his body — receiving acupuncture, swimming, running — are interspersed with scenes of dancing nude bodies. Some dancers have disabilities; some do not appear to.

The narration's refrain: "I am afraid if I sit down, I will never get up again."

"Crip Shots," made in 2001, takes a different tack. Six short portraits feature disabled performers Killacky, Chris Hewitt, Terry Galloway, Bill Shannon, Judy Smith and Greg Walloch speaking for themselves. In his monologue on experiencing micro-aggressions, Walloch remembers a woman telling him, "Your body is crippled because it's crippled with sin." The comment underscores an intersection he shares with Killacky: being both gay and disabled.

The "crip shot" of Killacky is an exciting stylistic break from his other works, set to an urgent, otherworldly score by Meredith Monk. Using digital editing, Killacky created a montage of biotechnological footage; it's a potent, futuristic missive about the nonhuman machinery — MRI machines, computer screens — on which our breakable bodies rely. The body's details are distilled to data points.

Killacky's latest works, which anchor the intense narratives to either side, are devoid of motion by comparison. At first glance, "Dreaming Awake" may appear to be a still black-and-white portrait of the artist. If a viewer lingers, it becomes clear that this is a digital video, a meditation on the terrain of the artist's face and his nearly imperceptible movements.

This work belongs to Lockwood's "Portraiture Reimagined" series of so-called "cinematic portraits." Killacky considers it a "reconceiving" of his 2003 work.

"FLOW" is a short digital video that shares the somewhat ambiguous stillness of "Dreaming Awake." Only Killacky's chin, ears, neck and collarbone are visible. A small stream of water trickles down his face from an unknown source — a sort of inverse to the blood of "Unforgiven Fire."

"I wanted a purification ritual, a cleansing piece," Killacky said of "FLOW."

As a viewer absorbs this body of work, a portrait emerges of an artist who has always used his body as a performative medium — even after its once-reliable mechanisms changed nearly instantaneously. Killacky shows himself to be an adaptable survivor, a person who has turned to the camera and to his own words again and again for release, comfort and strength.

The original print version of this article was headlined "Sacred Vessels"