Visitors to the BCA Center who make their way up to the windowless back room on the second floor might be surprised to find something resembling the construction sites now active all over Burlington. "Job Site," a collaborative installation by Alisa Dworsky and Bill Ferehawk, presents to the viewer an unfinished double wall, framed out with fresh lumber studs and partially sheathed in white drywall and plywood.

Ideally, job sites eventually become completed buildings, but this one is a paean to the process of building. Two silent, black-and-white, slow-motion looped videos, showing a chalk line snapping and a plumb bob swinging, animate the front wall. They emphasize the physical work, coordination and precision of the act of building.

Utility buckets filled with wood shavings sit beneath an informational wall, emitting a faint woody smell. An array of stud-framed frottage drawings — think charcoal rubbings — on heavy Japanese paper depict various builders' tools; they fill the wall to the left of the unfinished construction. The wall to the right is lined with huge sheets of Tyvek paper patterned with a grid of hammer hits. And the entry is partially screened by a ripstop-nylon curtain whose panels bear the rubbings of more wood studs.

Gallery space tends to lend an aura of aesthetic value to whatever it contains, simply by asking viewers to look closely. But in this case, Montpelier artist Dworsky and Ferehawk, who lives in Los Angeles, wanted to highlight what they view as the actual beauty of a rarely seen creative process.

"The process of making a building is so elaborate and complex, and it's so beautiful — even more than in the finished state," Ferehawk says during a phone call. "It's like when you're studying the body: You see all the organs and bones."

The two artists met in the architecture master's program at Yale University, graduating in 1992 and 1990, respectively, from what was then the only design-build program in the country. Dworsky and her husband, Danny Sagan, started a design-build firm focused on sustainable building, then called Terra Firma and now called DS Architects. She is also an adjunct lecturer at Norwich University in Northfield. 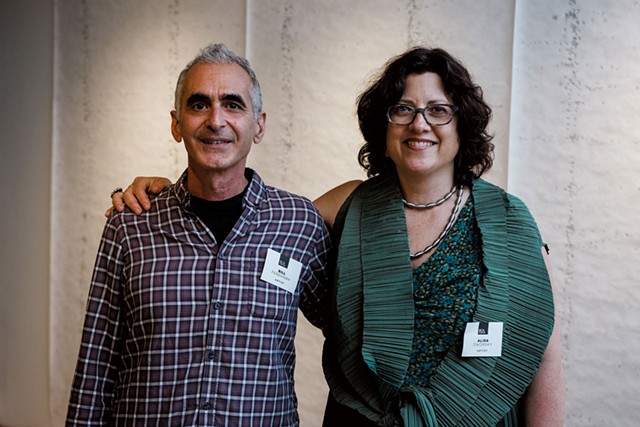 Dworsky began devoting time to art installations in 2001, when she erected 1,000 reflectors on steel posts, in patterns referencing corn rows and orchard grids, along a one-mile stretch of Route 4. The six-week installation, a commission for the Vermont Agency of Transportation, was activated at night by the headlights of passing cars.

After his graduation, Ferehawk worked for 10 years as a designer and project manager for various architecture firms before settling full time into film and digital multimedia. His LA firm, Radiant Features, has produced documentaries for the History Channel and PBS, including a biography of midcentury architect Eero Saarinen. (Ferehawk worked for two years as a designer in the office of Kevin Roche, Saarinen's former practice.)

Ferehawk and Dworsky worked out every detail of the exhibition over email and phone calls over more than two years. They met only twice, first when Ferehawk visited for a week in March 2018 and then when he returned to help erect the exhibition ahead of its opening — which took the two artists nearly 10 days.

Though unfinished, the double wall has a deliberate arrangement of exposed studs and blocks of sheathing. A section of open framing on the front wall, for instance, reveals drywall on the one behind. Says Dworsky, referencing Dutch geometric art and architecture of the 1920s, "I think about De Stijl and Mondrian and the Rietveld Schröder House in Utrecht — the way things are sliding past each other."

She and Ferehawk conceived of a double wall, she adds, to evoke the depth of three-dimensional construction. "There's this layering that happens with the light coming through the joists and studs," she says.

Despite the gallery's slightly low lighting, viewers will notice that the studs — a unifying factor in all parts of the installation — have blue-painted ends in the double wall and red-painted ends when used to frame the charcoal rubbings of the hammer, drill, saws, wrenches and other tools. "Different mills use different colors," Dworsky explains. "I've always thought that was really beautiful. If you go to a lumber mill and see it stacked, you get this wall of color."

What's missing are the people who do this work, though the artists clearly intend their installation to imply the presence of builders in every way. The wall of hammer-hit Tyvek, for example, is titled "Stud Finder," referring to someone who taps a wall with a hammer up, down and sideways to find the studs. Inspired by the sounds of that process, composer Erik Nielsen of Brookfield penned a new composition that will be performed in the space on Tuesday, September 24, following a talk by Dworsky.

The exhibition is also meant to bring to mind the sheer arc of time during which humans have built structures. While "Job Site" makes use of contemporary materials and construction, including the common 16- and 24-inches-on-center arrangement of studs, the plumb bob has been around "from the beginning," Ferehawk says. (The video depicting it is called "Time and Motion.") The chalk line is a throwback; workers today generally use laser levels. And the sheets of Tyvek are anchored with lines of red string that reference the way builders have long laid out foundation dimensions.

Construction workers on break from nearby sites, one imagines, might be startled and pleased to find their handiwork, tools and materials the objects of celebration in an art gallery. Curator Heather Ferrell says she timed the exhibit to coincide with Vermont's short building season.

"Creating art and creating buildings — are those two worlds that dissimilar?" she comments.

As one visitor perceptively observed to the 2-year-old boy on her hip, "I think they're making this look like what's happening outside."

The original print version of this article was headlined "The Beauty of Building | "Job Site: Alisa Dworsky and Bill Ferehawk," BCA Center"