Nomophobia: It sounds like a fear of not existing, of being "no more." The term is actually an abbreviation for "no-mobile-phone-phobia" — that is, the fear of being out of mobile phone contact. The condition was first recognized in 2010, but debate persists about whether nomophobia is more accurately considered a form of anxiety disorder. Meanwhile, the phenomenon can be witnessed everywhere in industrialized nations — and on the walls of Studio Place Arts in Barre.

In "#nomophobia," Montpelier artist James Secor undercuts the fear with his exhibit of 30 small paintings and 52 selfies, each of the latter the size and shape of a cellphone. In his world, the cellphone is ubiquitous but disarming — even charming. Like a punk rocker performing "unplugged," Secor turns off his mobile phone and repurposes it for his process of "recording" himself with the simplest of tools: paper and pencil.

Born in Kentucky, Secor graduated from Hobart and William Smith Colleges in Geneva, N.Y., in 2010. He moved to Montpelier two years later and has been actively creating and showing his work ever since.

Secor divides his exhibit in two sections: Documenting ("Selfie Series") and Paintings. The "Selfie Series" needs no introduction as viewers enter SPA's second-floor gallery. Actually a series of short halls interrupted by doorways to artist studios, the space is less than ideal for an exhibit. But in this case, the small works benefit from close quarters.

The series appears in two groups of two horizontal rows each. One contains 20 cellphone selfies, the other 32. Secor made these pencil drawings, mostly self-portraits, using his reflective cellphone screen as a mirror. Many of the drawings depict the phone's external features — the on/off button, the tiny speaker at the top, the back button, etc.

Secor's understated humor is part and parcel of the tiny works' appeal. These are by no means hyperrealistic drawings. They are thick, dark lines on pieces of paper — sometimes loose, sometimes more precise. They are scratchy scrawls. The lines create shadows under the self-portrait's eyes, beside the nose, below the mouth. They are wonderful.

Neither these pictures nor their inspiration are gimmicky, despite what the title might lead some viewers to expect. Secor uses the terminology of digital culture and examines the 21st-century reflex of looking down at phones. He doesn't judge it; he simply captures it. While documenting our cultural fixation, he is both participant and observer, connecting to the larger phenomenon through his own phone and his art.

Many of Secor's paintings are derived from memory, such as recollections of playing baseball as a kid in his family's backyard, and abstracted in acrylic on paper, board or canvas. Some of these are partially imagined, based on fleeting "memories of a city on a river or boats in a harbor," as Secor notes in his artist statement.

The two largest paintings on exhibit, "Great Lakes" and "Charles de Gaulle (Roissy)" (about 20 by 17 and 24 by 30 inches, respectively), are described as "compositions translated from internet-based maps." Both of these works are acrylic on canvas; all but a few of Secor's smaller acrylic works are on 9-by-12-inch paper.

The works in Secor's "Townscapes" series were conceived as aerial-view paintings in which "objects and people look convincing," he writes in his artist statement. Sometimes done monochromatically, as in the case of "Greypelier," the paintings are reminiscent of Gerhard Richter's late-'60s "Townscapes." The German artist sourced his images from aerial photographs and painted them in grayscale using inexpensive exterior paint. The resulting abstraction of Richter's paintings hovers between evoking a fully realized city and the aftermath of a bombed one. 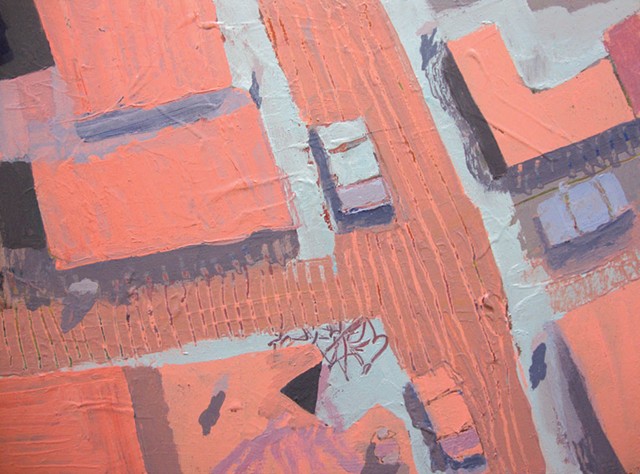 Although a few of Secor's paintings lean toward gray, his color palette hews closer to pink; these works are bright, bold and cheerful. A painting like "Pink Town" suggests waking up in a California motel on antidepressants. The sun may be out and the colors bright, but you know that's still just a parking lot outside.

Secor's titles have a subtle dark wit that conveys optimism even when they appear to be merely descriptive, as in the case of "Enter Roundabout" or "Where Are My Friends?" At times the artist seems to channel Edward Hopper, even if his aerial views alter the perspective. Secor's point of view is more like that of an angel hovering overhead than, say, that of a drone or airplane.

His expressive paintings signal connection rather than clinical observation, and rarely do they imply surveillance. Rather than interpret Vermont's bucolic nature, Secor is content to burrow through its cities, travel its roads ("State and Main") and sit beside its bridges. He may have grown up in Kentucky, but he's got this state's number.