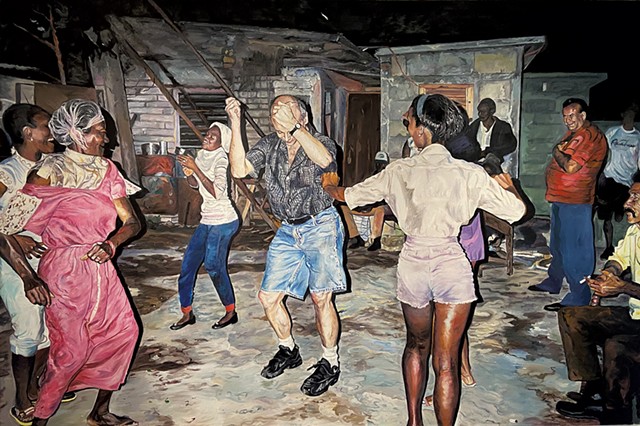 The ancients invented portraiture, but it wasn't until the Middle Ages, apparently, that anyone thought to paint, draw or etch their own image. That's because "it was an age preoccupied with personal salvation and self-scrutiny," according to James Hall, author of The Self-Portrait: A Cultural History. We can draw a straight line to the photographic selfie of the current era, in which we are preoccupied with self-documentation and "likes."

Over the centuries, countless artists have created self-portraits — and why not? The model is free and nearly always available. Painting one's face again and again is, after all, great practice for getting the nose just right, capturing the fall of light upon the cheek and so forth.

But self-portraiture can be less about technical mastery and more about exploring identity, trying to answer the existential question: Who am I?

James Rauchman is squarely in the latter camp. "Self: Reflection," his current exhibit at River Arts in Morrisville, is intensely psychological. One large painting dates from 1978, but most pieces have been made since 2015 — an "explosion of self-portraits at a difficult time," as Rauchman put it during a gallery visit. A few works do not depict the artist at all but rather glancing views of his studio. "I consider some of the interior spaces to reflect who I am," he explained.

The New Jersey-born artist, now 69, moved to Vermont with his husband in 2018 and settled in Morristown. It marked a return to the state: He had earned a BA in painting from Goddard College in 1974 and "had a work-study stint at Vermont Studio Center when it was getting started," he said. 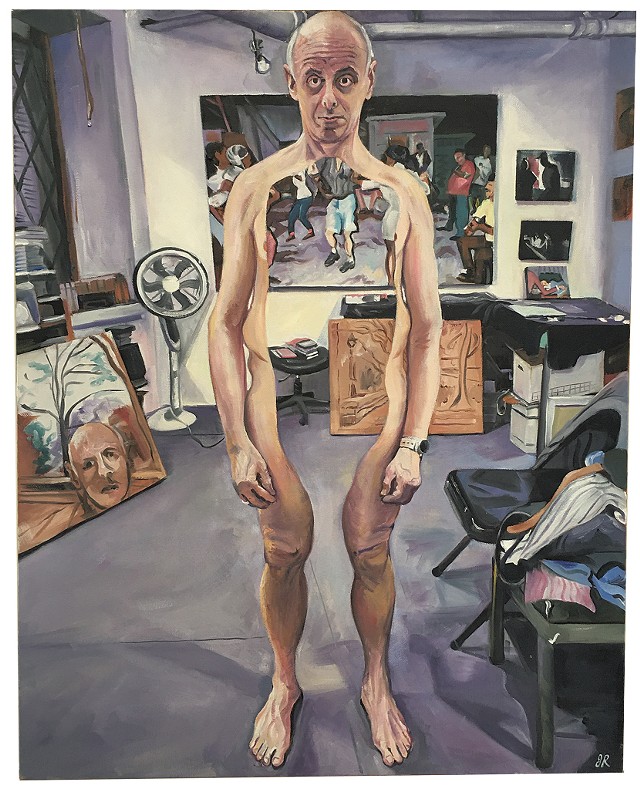 In the decades between, Rauchman lived in Philadelphia and New York City, where he acquired a master's degree in art education and an MFA in painting, respectively. Teaching didn't stick; painting most certainly did. "Art to me is like breathing," he said.

Rauchman is by no means solely absorbed with self. His website reveals numerous impressionistic landscapes, genre scenes and watercolor portraits of friends produced during frequent trips to Cuba, as well as video-inspired and abstract acrylic works. But when curator Beth Weintraub Liberman visited Rauchman's studio, she was drawn to his self-portraits.

"His sense of light and line was still there but with completely different content," she said.

Rauchman acknowledged that self-portraits may be less commercially viable than landscapes, but, according to Weintraub Liberman, art sales are of secondary concern at River Arts. The gallery committee was open to a show centered on an artist's personal experience, she said.

To be sure, these are not "pretty" pictures. Rauchman is unsparing with creases in the brow, circles under the eyes. He renders the fringe of hair around his bald pate with aggressive jabs of white paint. A few works have a "melting" quality that recalls British artist Francis Bacon's unsettling forms.

This harsh physicality serves to underscore Rauchman's turmoil. The later paintings correspond to a recent period of conflict about his sexual preference, he revealed.

"When you realize you're gay, it's in the background all the time," Rauchman said. "But something came to a head in those years with family. I had to confront the issue publicly — confront certain people and be confronted." He is grateful that he "had the painting to express what I was going through."

Inner conflict is evident in works such as "Winter Blues," in which only Rauchman's troubled eyes and black cap poke into the foreground of a snowy city park scene. In "Emptiness," he is beyond naked: He has painted his entire torso as a void; that is, a viewer can see right through Rauchman's nude body, standing in his studio, to other paintings beyond. His raw vulnerability almost forces a viewer to look away.

One of those paintings seen through his body is "The Dance," and this cross-reference — one of several in his works — is surely intentional. At 48 by 72 inches, "The Dance" is one of the largest paintings in the show. It's also older, painted in 2001 from a photograph. In it, Rauchman, clad in jean shorts and a plaid short-sleeved shirt, is dancing with abandon among a group of Cuban women as several men look on. "I found myself there in a certain way," he said. "Whoever I was, I was accepted."

This is a painting about being happy, and it's an emotional buttress in this show. "I wanted to retain that moment of breaking out of my suburban, middle-class life," Rauchman said of the work. "It was very freeing."

Though the artist is candid about his struggles, the paintings in "Self: Reflection" do not signal explicit concerns. As such, any viewer who has ever felt self-doubt, anxiety or insecurity can relate.

In several paintings on exhibit, weird vermicular shapes suggest feeling lowly, wormlike. In an interior scene from the studio, an empty trash can somehow communicates a sense of loss.

In a quirky piece titled "Monster," Rauchman inserts his full-color face onto the black-and-white head of Frankenstein — though it actually resembles 1960s comedic TV character Herman Munster. Is Rauchman poking fun at his own angst?

The most eloquent painting in this show might be "Offering," which also blends color and gray scale. In the 30-by-40-inch piece, Rauchman stands to the right, clad in a rose-colored shirt, and extends a bouquet in his right hand toward a painting on an easel to the left. The latter is painted in grays and, as the flowers overlap with the canvas, they also turn gray.

But, as Rauchman pointed out, the gesture could be read in reverse: The flowers become colorful as he plucks them from the gray canvas. Whatever one sees here, "Offering" exudes serenity, a feeling enhanced by its peach-hued, aura-like background and the artist-subject's calm expression.

The original print version of this article was headlined "Self-Awareness"