Art Review: 'It's Smaller Than I Thought,' Safe and Sound Gallery

Most everyone who sees "Mona Lisa" at the Louvre Museum in Paris has the same first impression, and hence is likely to smile knowingly at the title of a current Burlington exhibition. "It's Smaller Than I Thought," at Safe and Sound Gallery, features an invitational collection of two-dimensional artworks inspired by Leonardo da Vinci's most famous painting.

Gallery owner Marin Horikawa said he "cold emailed" 60 artists — from as near as Vermont and as far as Tokyo — of whom 15 came through. The result was an impressive variety of interpretations. Suffice it to say that Renaissance Lisa would not relate to most of them. For that matter, the Florentine noblewoman would surely be stupefied to find herself an international icon five centuries after she posed with that enigmatic smile.

Horikawa is enthusiastic about engaging children in making and learning about art. To that end, he had line-drawing versions of "Mona Lisa" printed in actual size for kids to take home and color. At the show's reception last week, those sheets were stacked on a table in the gallery. (That's how I discovered the painting is actually bigger than I remembered: 30 by 21 inches.)

A couple of the entries in the show realistically mimic da Vinci — up to a point.

Scharbach handily circumvents a charge of art fraud by adding a white plastic bag over Lisa's head. tweet this

Jake Scharbach's oil painting, titled simply "Mona Lisa, Leonardo da Vinci, 1503," is so exacting it could be a convincing fake. The Brooklyn-based artist is known for mixing images from the classical world with contemporary cultural detritus. In this case, Scharbach handily circumvents a charge of art fraud by adding a white plastic bag over Lisa's head and a slice of pizza hovering in front of la donna's left breast. The bag features a large smiley face and the omnipresent imperative "Have a Nice Day."

At last week's reception, that painting was the first to acquire a red "sold" dot.

Janice Wu's "2020 Mona" also depicts the original, except it's meticulously rendered, in pencil and gouache, as a jigsaw puzzle with a lot of pieces missing. At 36 by 60 inches, the work surpasses da Vinci's portrait in size, but most of it is empty — that is, white Arches paper — as if inviting the viewer to finish the puzzle.

British Columbia-based Wu writes that her illustration "embodies the quiet uncertainty, anxiety and longing for familiarity that was instilled in our collective psyche during the pandemic." It has indeed been a puzzling time. Wu's piece itself is enigmatic, suggestive both of what has been lost and what is still to be found.

Christopher DeLorenzo writes that his acrylic painting "Highway Blue" was inspired by "a line in a Bob Dylan song where he sings, 'Mona Lisa must have had the highway blues, you can tell by the way she smiles.'" While Dylan made lyrical reference to an ancient artwork, the Massachusetts artist seems to borrow from more modern masters. His simple shapes in two shades of blue with white outlines call to mind both the cutouts of Henri Matisse and Pablo Picasso's elegant line drawings. 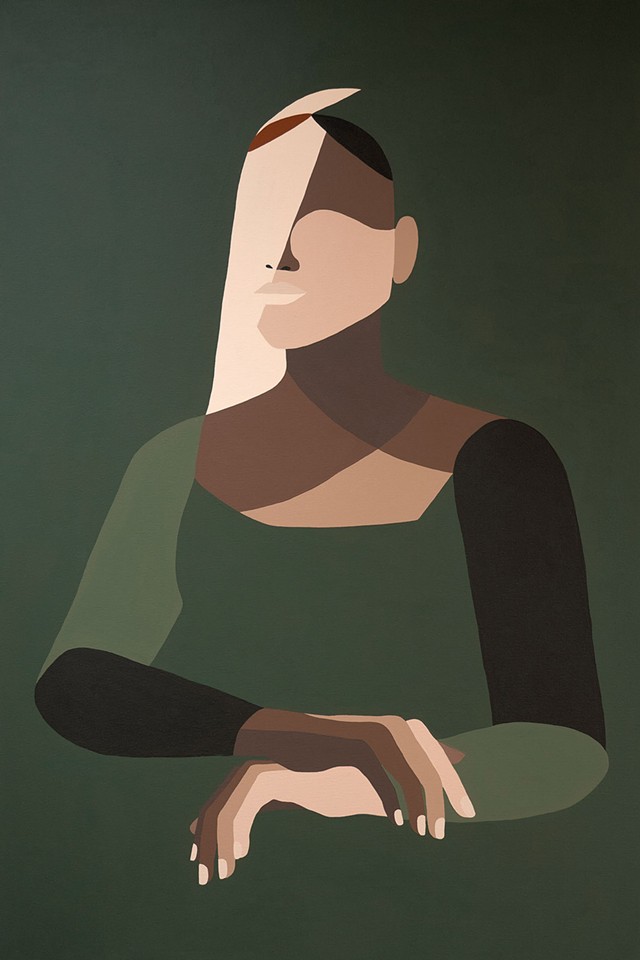 With "Renaissance," an acrylic painting on unstretched canvas, Swiss artist Naomi C. Gallay contributes racial reckoning to the exhibition. Her Lisa is rendered in flat, graphic blocks of color representing multiple skin tones and set against a deep green background.

Though featureless, the portrait instantly speaks volumes about human history. Gallay's title refers less to da Vinci's era than to a February Time magazine essay by Ibram X. Kendi, "The Renaissance Is Black." In it, the author delivers a withering takedown of the ubiquitous, entitled "white gaze" while applauding a rising tide of Black creativity and "spiritual emancipation." The racial groups evoked here, Gallay's painting practically says out loud, are equal. 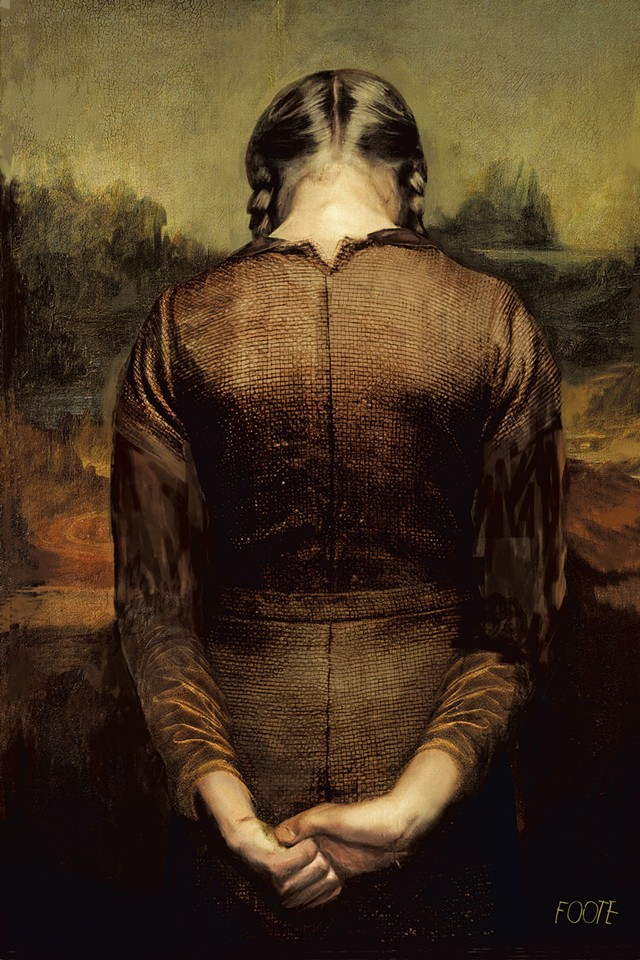 "No More Smile" is the title of Kevin Foote's work in acrylic, gouache and graphite. In the context of this themed show, the background is easy to recognize as resembling that of "Mona Lisa." But the viewer may only register this after examining the subject — a young girl standing with her back to us — and the stunning execution of her checked dress, glossy braids and luminous skin.

It's an unusual portrait, to be sure, not only because we cannot see the girl's face but because her head is bent forward — in shame? shyness? — and her hands are clasped tightly behind her back. Wisconsin-based Foote pairs the romantic landscape with a regionalist, distinctively American psychology. The painting's murky tones recall Andrew Wyeth's earthy palette; its emotional resonance even conjures up his famous composition "Christina's World."

Foote writes in his artist statement that he likes to "[leave] the viewer in a sense of wonder." He has succeeded, and exquisitely so.

Vermont artist Nori Pepe describes the methodology of her print-making as "almost the antithesis" of da Vinci's process and "a cathartic expression of the year we just endured." She created "Mona" with layers of monotype and chine-collé prints and multiple pieces of paper. Rather than embracing the Italian artist's rich tones, as Pepe writes, her palette "seemed to start in the shadows."

The resulting linocut reflects her complicated process and focus on pandemic challenges, yielding an image with a lot to parse in terms of both technique and content. Pepe offers a Lisa who looks like she's been through the wringer, but whose composure remains undaunted.

Yoshi47, by contrast, brings levity to the exhibition: The artist's "A woman with green hair" is hilarious. Said woman is, of course, Lisa. But forget enigmatic; her curved-up smile is enormous and shows way too many teeth. Her buggy eyes, too, express manic excitement.

Other characters scattered about the canvas wear that same Cheshire-cat-on-uppers grin — a Yoshi47 signature. He describes the work as "a portrait of a girl who normally shines in the dark in company with so many creatures she created in her mind." Indeed.

While it's a teensy bit creepy, the Japanese artist's candy-colored acrylic painting is still magical and joyous. Any viewer who remains unmoved by Yoshi47's irrepressible energy has a cold, cold heart.

San Francisco artist Katie Benn's "Mona Works From Home" is funny, too, with what can only be called an attitude. The petite oil pastel work is cartoonish: Lisa's flat face has large brown circles for eyes and a red slash for a mouth. Her shoulder-length bobbed hair is bright blue.

With her arms crossed over her plaid dress, our girl looks resigned, her expression a 21st-century "whatever." Benn's explanation: "A global pandemic forced the Louvre to temporarily close its doors. Mona couldn't afford to do nothing; she had to get a job."

"It's Smaller Than I Thought" was not necessarily intended as a response to the pandemic, but how could it not be? As one of the first local shows to open for in-person viewing, this collection is a satisfying jolt of provocation, fun and catharsis.

The original print version of this article was headlined "Small Pleasures"