In Jonathan Glazer's unsettling 2013 film Under the Skin, an alien life form takes on the bombshell body of Scarlett Johansson. With a few aesthetic choices of its own, the ambiguously gendered creature then uses the appropriated costume to seduce and consume men. In questioning the nature of empathy, gender and the performance of being human, the film is both scary and important.

Drawings, sculptural costume, performance, installation and video coalesce in "Interpose" for a sharp but tender enactment of longing and confession: the longing for alternate realities (that might sometimes feel more real than this one); confessions of creating and inhabiting other bodies.

If that sounds weak, it shouldn't. Here, the art is agency — not just representation — and its rawness can be felt in the gallery. Imagination is invention; costumes are made for wearing.

Leith's designs, for example, are not only for traversing the earth but the sky and subterranean realms, as well. "Adventure Girl," modeled on a silver-wigged mannequin, is a white utility suit with silver accents, laden with snap-buttoned pockets for holding every conceivable tool or talisman. The blinding whiteness, classically associated with angel or bride, becomes a canvas to be sullied by self-driven action.

The photograph "Trilobite Underground" is darker: A hooded figure in Leith's "Trilobite Jacket" ascends a subway escalator, looking every bit the stuff of highbrow art-house horror. The series of design drawings "Bird Girls" shows Leith's bulbous garments made of parachutes, ready to fly.

Garcia also exhibits ready-to-wear work; her "Origin of the World" dress, she writes in her statement, "is a response to the shifting landscape of the female body during pregnancy." While Leith's designs appear sleek, technical and exact, Garcia's visible stitching, rough edges and lace speak to improvisation and earthiness. Still, "Origin" is just as utilitarian, with an arsenal of tools crafted into the skirt.

Garcia also sews soft, puffy, intestine-like forms into the exterior of her garment. Such viscera appear elsewhere in the exhibition, particularly in both large and small works by Puerta. "Look at Her Laughing, Like a Heifer to the Slaughter," named for Brian Eno lyrics, is an almost-five-foot-wide charcoal drawing of guts, breasts, floral motifs and speckled eggs that appear to be sprouting fur.

Puerta's organically derived entities come to vibrant, three-dimensional "life" in her fantastical installation "A Las Mujeres a Mi No Me Quieren y Es Porque Yo No Tengo Plata" ("To the women who don't love me and it's because I don't have silver [money]"). In it, two hunched, charmingly grotesque, roughly life-size beings trek through a "river" constructed of blue fabrics on the floor. Their garishly painted heads and faces, made from strips of plaster gauze, seem to melt into globby, knotted bodies of stuffed nylon atop spindly legs. Spotted green papier-mâché cacti grow like barnacles on their backs.

Who/what are these odd creatures? Do they represent wealthy doyennes whose riches spawn their disdain? Or are they cackling fairy godmothers/Baba Yagas guiding Puerta down her penniless path? The mythology at work here may need further explanation, but it captivates regardless.

Greene's contributions fit in not only thematically but materially: Like Garcia and Puerta, she uses translucent nylon to replicate the skin. Her wall-hung "Finger Necklace" sculpture approximates digits as oversize peachy-pink cones, the longest nearly a foot, each with a bright areola-like tip. As the artist writes in her statement, "I am inventing new sensory organs."

Four of Greene's small-scale acrylic and gouache paintings are also on view. In "Two Ladies Chatting," her subjects' faces are covered by or perhaps just are star-filled skies. That is, their heads appear to be helmets through which we view a nighttime constellation rather than human facial features. These skyscapes recur in many of Greene's other drawings, including "Homing," which features half a dozen humanoid female forms with sky faces, holding sky globes. The figures stand amid colorful, stylized ferns against a flat yellow background.

Donnelly's nearly six-minute video "Engagement" offers a triangulation of sorts, capturing the living, breathing ephemerality that's missing from the other works. In the video, an arresting, alien-like creature (Donnelly wearing her "Green Umbrella" sculptural costume) inhabits the desolate parking lot of a defunct big-box store. The anonymity of the commercial environment acts as a blank canvas where both the artist and observers can construct fantasies of a parallel — or perhaps forthcoming — universe, where beautiful green land-bound jellyfish can dwell. 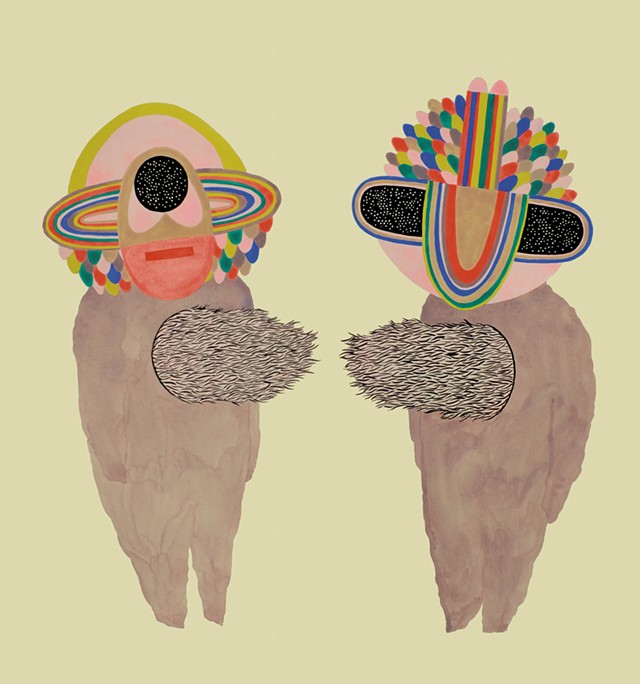 Smereka is keenly aware of the pitfalls of the label "women's show," she notes in her extended curator's essay accompanying the exhibition. But, in any work that has something to say about embodiment, constructs of gender will be in play. Indeed, several of the artists make explicit references to female archetypes — the mother, the wild woman — in their statements. As with Under the Skin, the show is not solely about being female or about being "other." Rather, it is about the truths and deceptions that shape and defy both experiences.

The works here are deep but generally not difficult to decipher or enjoy. Their disruptions are real but peaceful. They show that under the skin are not just flesh and blood but worlds upon worlds.

The original print version of this article was headlined "Human/Being"