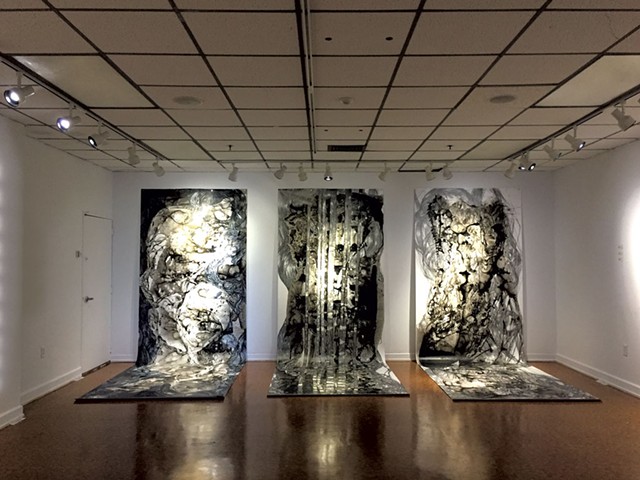 For some artworks, more space is better. The National Gallery of Canada in Ottawa, for example, has an 18-foot-high painting of vertical stripes by Barnett Newman, titled "Voice of Fire," mounted on a 40-foot-high wall. The effect of the already-large work in this soaring space is stunning.

The five abstract works that make up the exhibit "Inner Struggle Fought on Paper," by a South Burlington artist who goes by the name Misoo, aren't significantly smaller than Newman's. But the modest room in which they're displayed, the Living/Learning Center Gallery at the University of Vermont, appears barely able to contain them.

Made with India ink and pencil on 5-foot-wide paper roll, the works reach 15 feet in length. Three — called "Untitled 3," "Waterfall" and "Bartholomew" — are mounted vertically, side by side, so their lower halves extend along the floor. The horizontally hung "Chrysanthemums" spans an entire wall. The largest, "Metamorphosis," is a 9-by-16-foot installation of strips cut from a completed work and pushpinned into billowing shapes that spill around corners and encroach on the ceiling.

The ink itself has the look of being spilled. That isn't accidental: Misoo created the works by pouring the liquid onto Yupo paper, a waterproof synthetic "paper" made from polypropylene.

The visual impact of all that black overtaking its designated space is powerful and immediate, and the confining dimensions of the room only intensify it.

The space has another effect: It encourages viewers, thrust into confrontation with large-scale works, to examine them in detail. The effort is rewarding. The ink, which took three to four days to dry on the paper's impermeable surface, has formed endlessly varied visual effects, many of them seemingly biomorphic. Some sections look like skin ridden with boils, others like cell life seen under a microscope or close-ups of puckered fatty tissue.

Texture soon becomes evident, too. What appear to be coiled strands of hair are lengths of thread that Misoo introduced into the still-wet ink. After all had dried, she filled in much of the white space with dense, flowing pencil lines. These lines resemble reams of long hair or, in places, medical drawings of striated muscle. Misoo, who gave a gallery talk last Friday, said she spent "hundreds of hours" on the pencil work.

The landscape of the body has never seemed so abstract, but the works of "Inner Struggle Fought on Paper" arose from concrete experience. For most of her childhood, Misoo lived in Korea, where, she said, a family member sexually abused her for two years. When she was 18, her father died, and she moved with her mother to New Jersey.

While learning English and coping with American high school, Misoo began making art. But not until she was deep into a master's study in painting, at Florida Atlantic University, did she realize why all her art seemed both autobiographical and disturbing. Misoo remembered the abuse from 20 years earlier and began to confront it in her work.

The scale of the Yupo paper roll, she said, is large enough to contain a struggle between two people. The ink represents the perpetrator, the "hair" (pencil lines) the victim.

The installation piece "Metamorphosis" suggests a process of wresting power from the perpetrator. Those billowing shapes are a form of self-actualization, recasting the motif of flowing hair in three dimensions. The wall-hung relief contains the exhibit's only hint of color, in greens and pinks that peek from between black pools and clots of tangled thread.

"Waterfall" spills, as its title suggests, from wall to floor. It was created by pouring ink over long strips of tape, which are placed longitudinally and emphasize the paper's length. For Misoo, the waterfall represents the fact that, while she still sees her abuser during family visits in Korea, "it all passes." The two have never discussed what occurred, she added. 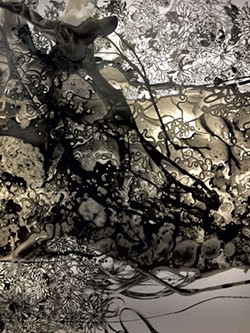 "Chrysanthemums" lets the struggle play out horizontally and suggests Misoo coming to terms with her traumatic past. The work is unusual among the five for its figurative flowers painted at the edges of ink runs, as if blooming out of the Pollock-like gestural spills. Chrysanthemums, says the artist, are a funeral flower in Korea, used both to say goodbye to loved ones and to represent hardiness because they bloom even in cold weather. The painting evokes the victim's symbolic funeral for past trauma and her resilience in its wake.

Would the sense of struggle be evident in these works without Misoo's explanations? It's not clear. Perhaps what gave rise to this reviewer's sense of their power wasn't the way the exhibit dominates its space but an understanding of the works' undercurrent of violence. As in the case of Agnes Martin — who declared her minimalist penciled grids to be expressions of happiness and love — an oeuvre gains dimensions of meaning when the artist reveals her intentions.