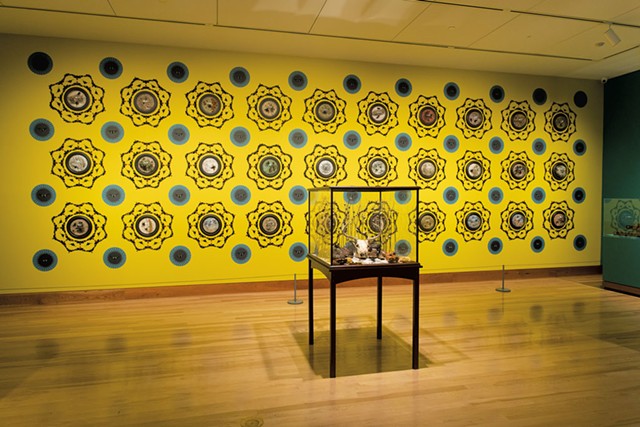 The title "In the Garden" almost guarantees pretty pictures of flowers, and this Shelburne Museum exhibition does not disappoint. In the selection of works spanning five centuries, botanical beauty is abundant.

However, that title — perhaps intentionally vague? — does little to prepare visitors for the full impact of the show at the Pizzagalli Center for Art and Education. To Vermonters barely emerging from mud season, lush visual stimulation may be particularly welcome. But "In the Garden" contains artworks that provoke the brain in other ways — some utterly unexpected.

Given the museum's history, it's no surprise to find an 1865 folk-art painting near the gallery door: Erastus Salisbury Field's "The Garden of Eden." The charming landscape, populated by a number of animals and innocent naked people, has a decorative gold and blue border. This idealized vision is easy to pass by, but the artwork immediately adjacent, featuring a very different "garden," caused this viewer to halt abruptly and linger.

Richard Saja, who has previously exhibited at the Shelburne Museum, is known for his textile works that subvert the traditions of toile. In Saja's hands, the patterned fabric that originated in 18th-century France becomes playful social commentary. "Four Seasons in the Garden of Toilerance" is no exception. Curator Kory Rogers commissioned the four-paneled piece, made of cotton, linen and "glow-in-the-dark" floss, for this exhibit.

Saja's depiction of paradise presents human children and fantastical creatures peacefully coexisting, as the punning title hints. Some of the nonhumans are actually composed of leaves. In one vignette, two human girls become lionesses below the waist. In another, a figure has no face. In a particularly cryptic detail, a girl stands somewhat beseechingly before a black stela, its import unknown. Saja's idyll is, like many a fairy tale, both enchantingly sinister and morally righteous.

"In the Garden" will likely introduce many visitors to Marie Zimmermann (1879-1972). The American designer and craftsperson mastered a wide range of metals and mediums, and nearly all her creations depicted or gestured toward flora. The exhibition includes a generous sampling of Zimmermann's metalwork, circa 1925, from exquisite jewelry in gold and precious gems to gilded copper vases and bowls to a sturdy wrought-iron gate — this last a gift from the artist's foundation to the museum. The quality and elegance of Zimmermann's designs give them a timeless appeal. The curatorial decision to include a wall-size photograph of the artist seems intended to emphasize her gender; indeed, Zimmermann was remarkably prodigious, versatile and recognized for a woman of her time.

An installation called "Memento Vitae," by a woman of this time, claims the gallery's entire back wall. Jennifer Angus, a professor of human ecology at the University of Wisconsin-Madison, works with insects. While many of us would recoil from them while they're alive, these are dead, perfectly preserved and iridescently beautiful.

The 35-by-11-foot wall, painted a vivid yellow, is filled with kaleidoscopic patterns made up of insects — 960 of them, according to a museum docent. (That's modest compared with Angus' 5,000-bug installation at the Renwick Gallery in Washington, D.C., a few years ago.) Many insects are pinned to the wall in circular motifs. Others are encased in glass domes with milkweed-pod fluff or arrangements of tiny dried flowers. Most of the insects are large, exotic varieties from locales such as Indonesia and South America. Angus claims not to exploit any endangered species.

And she discourages the use of the term "bugs," in wall text that extols the vital roles of insects in the natural order. Indeed, Angus' exposition might make viewers think twice before wielding a fly swatter or aerosol poison this summer.

The exhibition also includes two vitrine installations by Angus. In one, with the same title as the wall display, she has carefully arranged insects within two open drawers of a wood antique case; the bottoms of the drawers are lined with delicately marbled paper. In the other, "Memento Mori," Angus' insects have company: an antlered deer skull, baked breads, beeswax candles and dried stalks of unidentifiable plants. The intent of this arrangement is unclear, but the artist's deep respect for her "medium" is evident.

Nearby, three large, wall-hung platters by Brattleboro artist Laura Zindel memorialize insects in a more functional way. Black enamel transfers of dragonflies, Goliath beetles and ants, respectively, form stark, symmetrical designs on the white ceramic. Zindel is known for her imprinted line of tableware and other home goods; in this case, a low-fire glaze ensures that the insects do not become dinner. 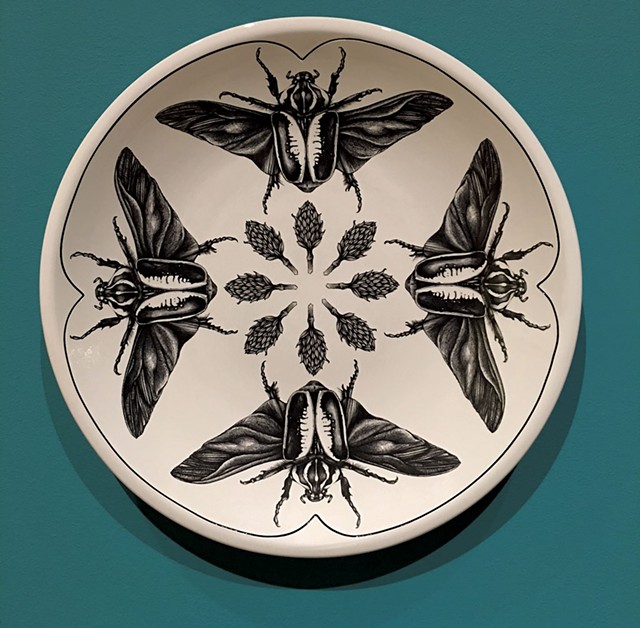 Numerous artworks hang or stand between the buggy back gallery and the door: an intricate quilt, a trompe l'oeil flower arrangement painted on the footboard of a small bed, a sumptuous 19th-century still life, a small Georgia O'Keeffe painting of calla lilies, and more. But one entry to "In the Garden" may remain in viewers' minds long after leaving the show: "Gwen Araujo," by San Francisco-based Kirk Maxson.

The 2018 wall-hung work is lovely; foliage and blossoms cut from aluminum, some of them tinted pale rose or blue, form the word "Gwen" in large cursive letters. The work's intricacy echoes that of the floral embroidery on a vintage wedding dress also on display. But this homage arose from a brutal crime: The name belongs to a young transgender woman murdered by four men in 2002 in California.

The tragedy led to the 2006 Lifetime movie A Girl Like Me: The Gwen Araujo Story and, more importantly, to legislation that same year, the Gwen Araujo Justice for Victims Act. Signed by then-governor Arnold Schwarzenegger, the law restricted the use of the "gay/trans panic defense" in criminal trials.

"In the Garden" is an aptly fecund exhibition. It pleases the eye with beauty, yet among the flowers it has planted ideas about tolerance, acceptance and purpose in the natural world.

"In the Garden," on view through August 26 at Shelburne Museum. shelburnemuseum.org

The original print version of this article was headlined "In Bloom"