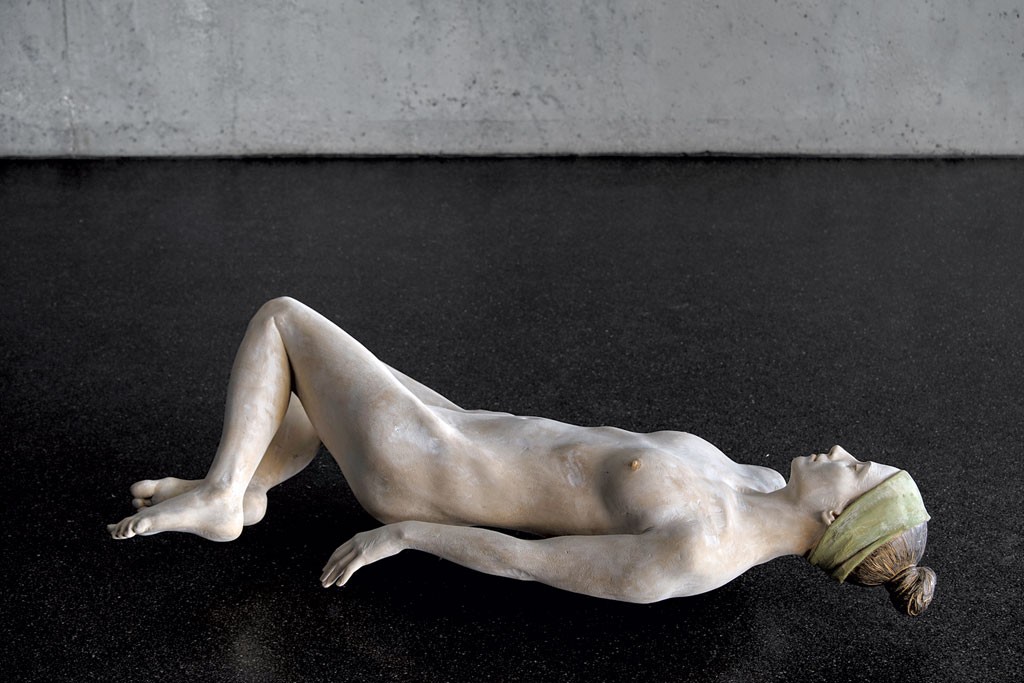 Wood is a familiar material, something everyone grows up handling. So, in a museum setting, it's a fantastic medium for bringing disparate types together — from woodworking fans who don't normally care about art to art enthusiasts who secretly suspect wood is an outmoded material. The current exhibit at the University of Vermont's Fleming Museum of Art, "In Grain: Contemporary Work in Wood," holds surprises for both groups. 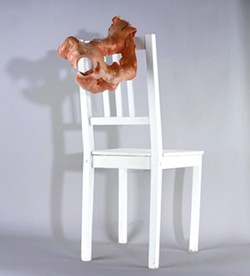 That's due in part to the wide range of potential uses of wood on display. The 10 artists represented have employed the material to compose abstract assemblages, carve lifelike figures and erect dollhouse-like constructions. Their work is rough-hewn or laser-cut, painted with trompe l'oeil grids or a smooth, manufactured-looking enamel. In every case, the artist's appreciation for the look and feel of wood is evident. (A large sign at the entrance warns against touching the works, but it takes an enormous effort to resist.) And not one artist has completely masked the material.

One trio of works comes close. Three weighty burls by A.M. Disher are initially unrecognizable as wood because they so powerfully suggest interior body parts. Painted on the human-intestine color spectrum, the burls are positioned on white surfaces. One is balanced on a chair back ("Sit Proper"), another attached at shin level to a wall ("Adrasteia (the inescapable)"), the third wrapped like a tumor around a protruding room corner ("Fester"). There is a kind of clinical violence in their chopped-off tubular branches, the ends painted white, and in the tiny surface irregularities accented with darker red to look like gashes. The shock of coming across them is, well, visceral.

Their creator is a young graduate of the Massachusetts College of Art and Design who appears to enjoy needling conventions of the art world and propriety alike. An earlier work of Disher's, a grotesquely restuffed armchair, lists among its materials "French Toile de Jouy fabric with depictions of white middle-class families enjoying everyday life" and "Generations of silence."

Yet the most unsettlingly beautiful works in "In Grain" are also the most traditional: a life-size bust of a young woman and a reclining figure of another, both carved by Italian sculptor Bruno Walpoth. The son and grandson of wood-carvers, Walpoth grew up in a town known for its centuries-old carving tradition. He traces his inspiration even further back, to the deeply human portraits of early Renaissance painter Piero della Francesca.

Walpoth's figures have idealized proportions and faces so rivetingly introspective that it seems impossible they're carved from wood. Yet their medium is unmistakable: The artist has left tool marks and crosshatching visible, particularly on the bust, "Julia II." This haunting woman's gaze is direct yet seemingly focused inward, on her own unreadable thoughts. Her face and neck emerge from a vessel-like base, and her skin is painted a translucent, fragile-looking white.

Walpoth's reclining nude, "Nelle neve voglio stare" ("In the snow I want to remain"), is a remarkable display of carving skill. The flattened underside of the woman's back is mounted a few inches above its pedestal, yet her hands and hair, bound in a bun, fall below that plane. It's as if her body has been draped over a sarcophagus, which has subsequently vanished.

Fleming director Janie Cohen, who curated the show, says she spotted Walpoth online and learned that these two works, owned (and loaned) by a New York couple, were the only two on the East Coast.

Six of the 10 artists live in Vermont, Cohen adds. One is Eric Nelson of Middlebury, whose 365 unique sculptures, each carved from a 2-by-2-by-4-inch block of mahogany, greet visitors in a double line that marches around three central walls. Nelson, recently retired after 33 years of teaching sculpture and drawing at Middlebury College, previously worked in large-scale steel, so "downsizing" for him has clearly taken on a whole new meaning. Expecting to carve one small block a day, Nelson instead finished "Three Hundred Sixty Five" in 12 years, finding inspiration in everything from Egyptian art to prehistoric fertility figures.

Tartan is the inspiration for Duncan Johnson's new work. Previously, the Bellows Falls artist joined salvaged wood strips, their original paint intact, into beautifully crafted "paintings," as he called them. The smooth surfaces of those assemblages were interrupted, if at all, by patterns of flush nailheads meant to catch the light.

"Pelican," one of Johnson's works in this show, shares that immediately recognizable idiom. Now the artist has begun experimenting with depth. In "Tartan III," he has made the crossed bands of a plaid appear three-dimensional, attached over and under one another in complex configurations.

Touching that last work (again, resist) would probably give one a splinter, but it seems particularly cruel that one can't touch Duxbury artist Nori Morimoto's four works. Each is like a Flor sample — those small carpet squares that come in endless patterns — designed to show off a texture, including burnt pieces, carved chunks and other organic forms.

Morimoto's works are nothing like the smoothly mod, rounded squares of Greg Mencoff (Disher's professor at Mass College), with their enamel-painted surfaces. Nor do those bear any relation to the rough — and roughly gouged — figures carved by Ria Blaas. Her "Little Man," resembling a short and stocky version of Auguste Rodin's "Monument to Balzac" but with a friendly expression, is entirely endearing. And, as any Star Wars fan would know, Blaas' "Seated," with its long white, anteater-like head, is definitely related to the Separatist battle droids.

"In Grain," in other words, provides pleasures for everyone. Viewers of the exhibit may find that the practical material filling their homes in the form of salad tongs, chairs and doorframes will never seem quite the same.