Good or bad first impressions are based on quick judgment, with no room for nuance or doubt. So perhaps it's appropriate that an exhibit titled "Impressions" would be all black and white, the tones with the most extreme contrast.

But curator Kerri Macon at Vermont Metro Gallery no doubt chose the works on view for how the three artists made their impressions — that is, for their techniques — as much as for their results. And the processes of Fran Bull, Jordan Douglas and Cameron Schmitz could not be more distinct, or more starkly eloquent.

Since the gallery opened last year with the aim of showcasing mature, high-quality work by Vermont artists, the modest space on the fourth floor of the BCA Center has held a lot of color. This time the room is lined with black-on-white works on paper, and the resulting quietude is Zen-like. But that does not mean boring. A viewer who moves past the calming first impression will find more stimulation — visual, intellectual and emotional — than initially meets the eye. And the fact that these works do not compete with each other makes it easier to meditate on each. 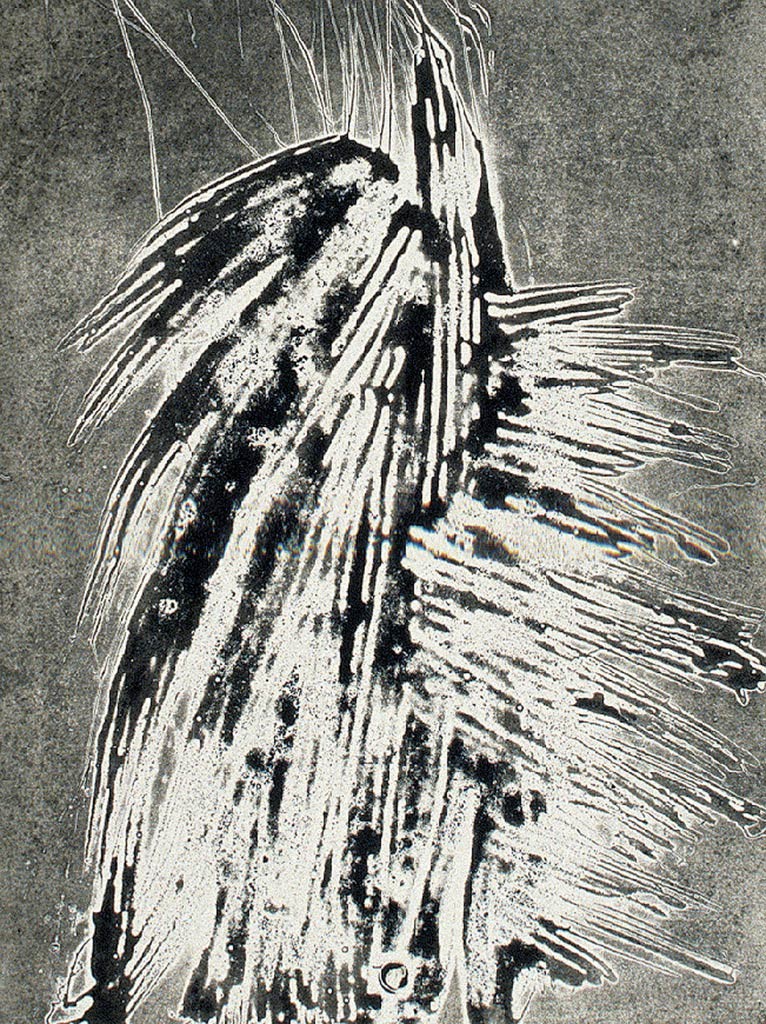 For starters, there are Fran Bull's dramatic etchings. "Toda la vida es grabado — all of life is etching," she writes in her artist statement, quoting in Spanish because the five large-scale prints here are from a series she calls "Barcelona!" (the exclamation point hers). The Brandon-based artist backs up the comment with a list of fissures, cracks, wrinkles, tears and other marks found everywhere from sidewalks to human skin to petroglyphs. Bull explains that she created her series "in the spirit of improvisation," using carborundum on Plexiglas plates, then inking and printing on paper.

Bull worked with master printer Virgili Barbarà in Barcelona; she notes that the city itself, and an exhibit at its science museum in particular, influenced the images that appeared on her plates. Indeed, Bull's gestures are sweeping, dynamic and fluid; she swiped the abrasive compound into organic-looking forms that seem like they may keep moving if you look away. "Grabado" and "Regal" are suggestive of microbiota, with "bodies" and protruding spiky "hair," but all the works are really abstractions, compelling for their ambiguity. 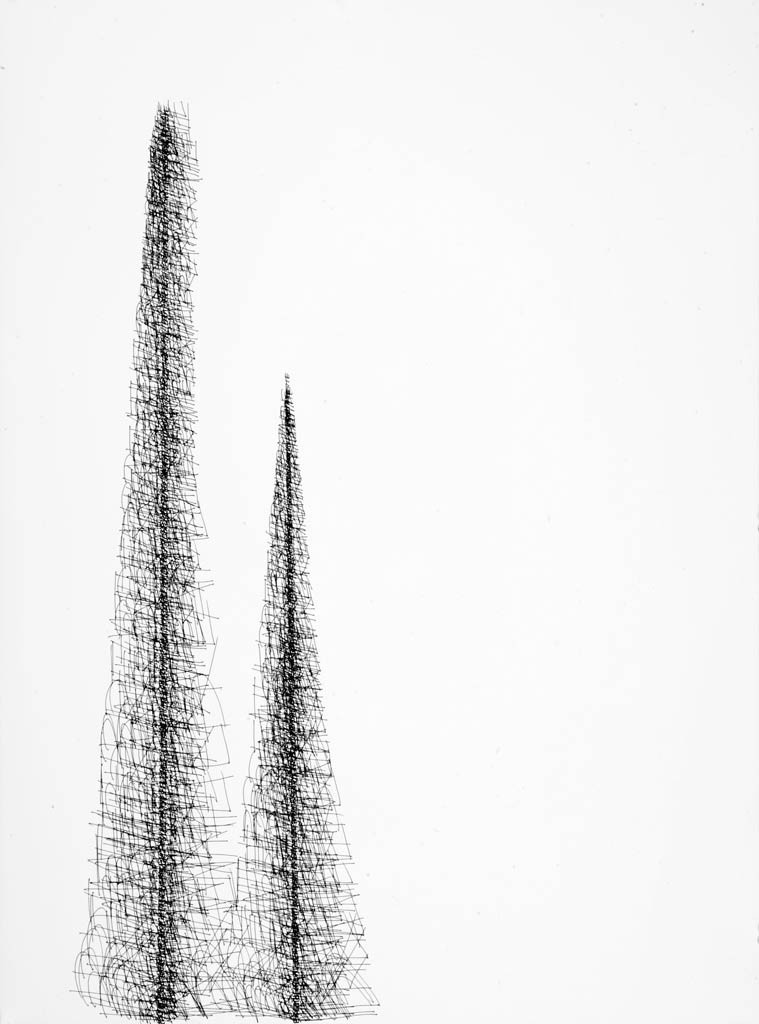 Cameron Schmitz's precise, text-based works in ink, each roughly 32 by 31 inches, could hardly be more different. Though she is trained in and teaches painting — at the River Gallery School in Brattleboro — Schmitz here presents five exceedingly spare drawings on otherwise untreated white paper, with thick black frames. Words are most apparent in "Chase Fear," a composition with a circular cluster of marks near the bottom center and a line extending from it to the upper left. From a distance, the shape resembles a yo-yo, its string held taut by some invisible hand. Closer inspection reveals the "string" to be a long strand of the word "CHASE," repeated over and over in blocky capital letters. The cluster at bottom, presumably, represents "fear."

Schmitz's work is neatly obsessive — chaotic scribbles corralled into shapes — and her drawings employ the power of negative space. This is most effective in the aptly named "Resist." Here an indeterminate mallet-like shape opposes a tubular shape, each of these again comprising a mass of scribbles. Both are arranged on a diagonal across the paper, with several inches in between them. Even without the title's suggestion, the two forms appear magnetic, though whether they are attracted to or repelled by each other is unclear. The allusion to human emotion is as strong as that white space in the middle is exquisitely charged. 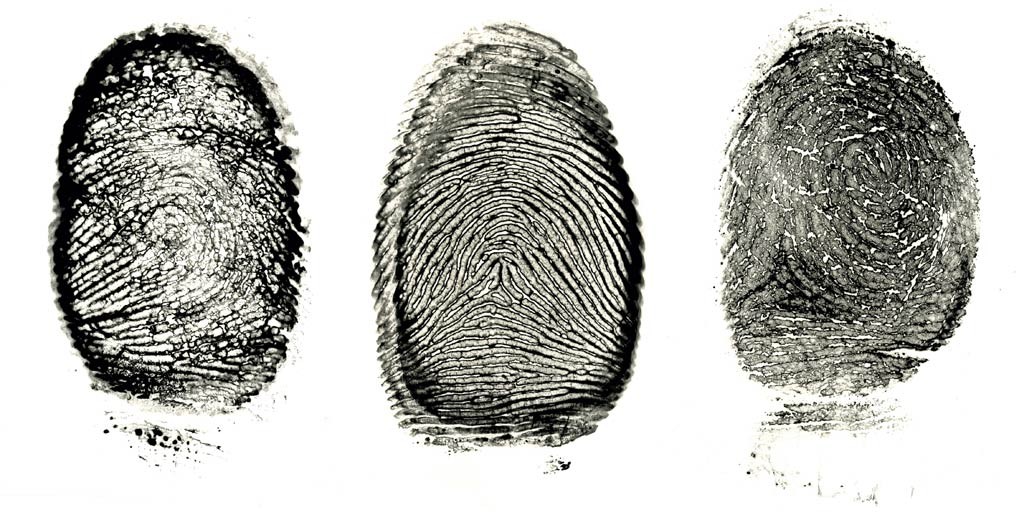 Jordan Douglas' "Fingerprint Series" introduces yet another meaning of impression to this exhibit, both literally and figuratively. Though technology has brought us such measures as the retinal scan, the fingerprint remains a classic indicator of unique identity. Douglas' 16-by-20-inch silver gelatin images of left index finger patterns dramatically underscore the notion of individuality: The arrangements of whorls and crenellations differ rather astonishingly from each other. This is true even in the case of blood relatives — four of the prints belong to Douglas himself, his sister and his parents.

Though Douglas is a photographer — he teaches at Saint Michael's and Champlain colleges — these images were created without a camera. He captured the fingerprints in a police department-y way, but using darkroom chemicals. "The fingers were coated with film fixer ... and held onto the film until the fingerprint was burned into the emulsion," he explains. "The film was then developed and processed so that the negatives could be used to make photographic enlargements in the darkroom." The prints were then lightly bleached and toned in selenium.

Knowing these fingerprints represent the direct contact of human skin on paper, "interpreted" through chemistry, somehow makes them even more boldly personal. Yet identification has its limits: These impressions don't tell you the person's race, gender, age, sexual preference or economic status. And so the individuals are simultaneously unique and anonymous. For a project that began as "playful inquiry," as Douglas puts it, the results inspire contemplation: about identity, similarity and difference, human potential and the patterns that define us.

It's all there in black and white.