Art Review: 'I AM…: Exploring What It Means to Be a Vermont Artist,' Spotlight Gallery | Art Review | Seven Days | Vermont's Independent Voice

Art Review: 'I AM…: Exploring What It Means to Be a Vermont Artist,' Spotlight Gallery 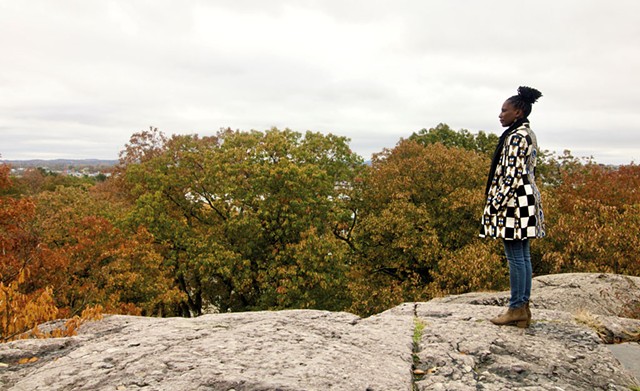 During a recent panel discussion at the Vermont History Museum in Montpelier, an audience member asked, "How do we make [Vermont] less racist," as well as "more livable" and "sustainable"? The panel featured five of the 27 artists whose work appears in "I AM...: Exploring What It Means to Be a Vermont Artist," on view at the Vermont Arts Council's Spotlight Gallery: Christal Brown, Will Kasso Condry, Toby MacNutt, Vera Longtoe Sheehan and moderator Shanta Lee Gander. The questioner, Toussaint St. Negritude, also has work in the show.

Each panelist had a deeply personal answer to St. Negritude's question, stemming from their experiences being African American (Brown, Condry), Abenaki (Sheehan), or disabled and nonbinary in gender (MacNutt). But the exhibit showcasing their work provides an answer in itself. "I AM..." brings much-needed visibility to a large number of artists doing distinctive, original work in their fields who are rarely acknowledged in the Vermont arts scene.

The exhibition was cocurated by Gander, an African American photographer, poet and award-winning investigative journalist based in Brattleboro, and by VAC communications director Kira Bacon. It reflects a year's worth of interviews that Bacon conducted under the title "I Am a Vermont Artist," which explored "how artists' creative expressions reflect their experiences of ethnicity, gender identity, religion, disability or age." The aim of the show, Bacon said, is to "deepen our understanding of what it means to be a Vermont artist."

From a broader perspective, Gander said, "I AM...' is positioned within a national conversation about who's in the collections, who has space. In Vermont, it's common to see the same people on the same gallery walls. I think ['I AM...'] opens things up. It requires us to be present and invite in the conversation and take in different kinds of art and faces we haven't seen." Gander chose the exhibit's title to give those faces a strong, declarative presence. 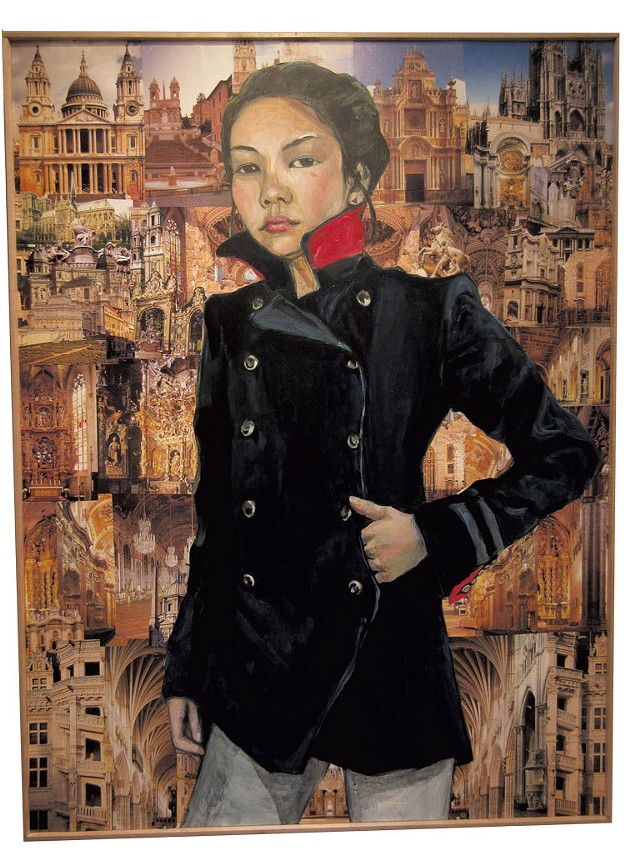 The multidisciplinary exhibition includes 15 works by 11 visual artists, as well as two compilations of videos by, or featuring, the remaining 16 artists. Also available for perusal are two binders presenting the work of four more artists. These include written works by MacNutt, a queer, disabled multidisciplinary artist and teacher based in Burlington who uses "they/them" pronouns. The show features a video in which MacNutt, who uses canes to walk, performs a dance.

Another video offers a live performance by St. Negritude, a gay African American poet, composer and musician who lives in Middlebury. He interweaves bass clarinet playing and spoken verse in performance, often bedecked in flamboyant homemade hats and jewelry.

Brown, an African American dancer and choreographer who chairs the Middlebury College dance program, contributed a brilliant and funny clip of a stage performance in which she narrates a personal story while interpreting it through dance moves. Over her nearly 30-year career, Brown has danced with companies such as the African American Dance Ensemble, Bill T. Jones/Arnie Zane Company and Urban Bush Women. She is also the founding artistic director of INSPIRIT, dedicated to bringing women choreographers' work to the stage.

Other videos include performances by Burlington-based hip-hop group A2VT and slam poets Muslim Girls Making Change, which were compiled into 30- and 15-minute loops, respectively. Viewers must devote considerable time to watching all of the videos, screening in the conference room — the larger of Spotlight's two exhibition spaces — and on a tiny tablet hung at standing height in the corridor, aka the lobby. In a better world, the state's arts council would have a space commensurate with its efforts to make the arts accessible to all.

Two remarkable paintings in the conference room were created by Condry, an African American painter and muralist who lives in Brandon. Both are portraits wrought from planetary-like spherical forms and vibrant colors. 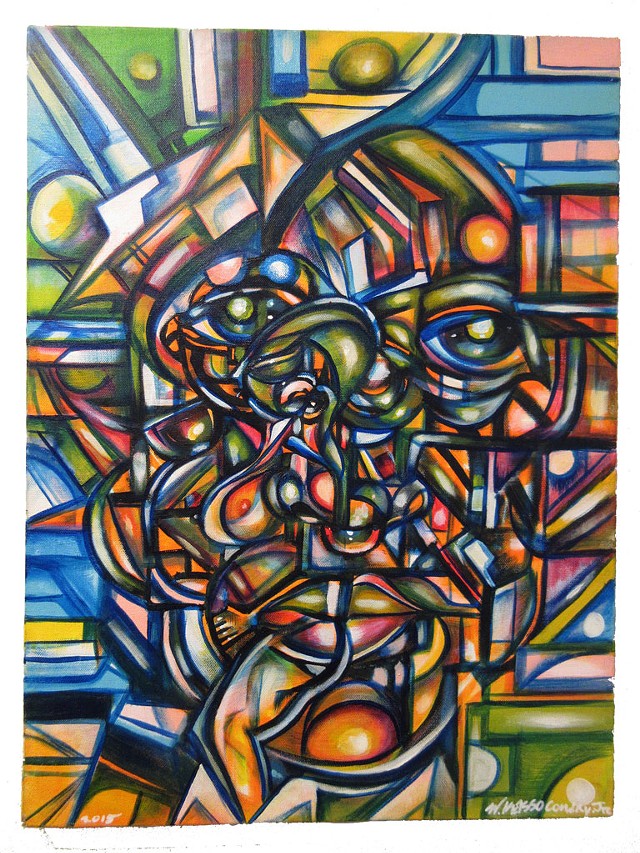 "Queen Mother" depicts a bronze-skinned "strong black woman" rather than a particular individual, Condry said in a phone interview. The work was influenced by the artist's research into the Maasai culture in Kenya. His "Self-Portrait" is both cubist in composition and its own style entirely; a dense entanglement of swirls, balls and other organic shapes gives way to a background of more rectilinear forms.

Previously a muralist in Trenton, N.J., Condry moved to Vermont three years ago. He and his wife and creative partner, Jennifer Herrera Condry, collaborate on community-centered public art. She helps locals explore ideas in workshops; he sketches out murals based on that input; and the community and the artist apply the paint together.

Recent projects include the new mural on Ben & Jerry's ice cream shop in downtown Burlington. To paint those, "70 people came out over the course of three hours [while] a local DJ spun some tunes," Condry said. "It was a real chill vibe.

"Art is the missing link when it comes to community organizing," he opined.

Gander submitted a large-format photograph to the exhibit. "Fly" depicts a regal black woman standing in profile on a rocky outcropping, surveying a very Vermont-looking stretch of fall color with a glimpse of a lake. The double-entendre title refers to both the slang word for "looking good" and the early-20th-century oral tradition that held that African Americans had the gift of flight. Is the photo's subject contemplating taking off?

The work is a preview of a series Gander is producing for a 2020 exhibit featuring black Americans and other individuals who are part of the African diaspora. By phone, the artist said she doesn't pose her subjects; she asks them how they want to be depicted, then asks if they know the stories about flying. Often, she said, they don't.

"I'd like to think that my work is about helping to hand back memory. It's handing us — the black community — back to us," Gander said.

Bacon said that Gander was the "sixth or seventh" person she interviewed for the "I Am a Vermont Artist" series. After discovering that the Brattleboro-based artist and her husband had just cocurated a mixed-media show in southern Vermont, Bacon quickly invited Gander to cocurate "I AM..."

Gander said she was thrilled by the opportunity. "I thought it would be an honor to work with the Vermont Arts Council," said the gregarious and upbeat artist-writer. She will bring the next iteration of "I AM..." to four venues in Brattleboro next year.

Bacon was largely unfamiliar with the 27 artists before she sought them out (or learned about them from Gander). What struck her about these Vermont artists, she said, given their varied backgrounds and experiences, was how much they shared with all Vermont artists. In Bacon's view, that includes an appreciation for nature, a grappling with Vermont's rural character, and the tendency "to be solitary but also crave community and interaction and feedback." In other words, she added, "the things that bind us all together."

The original print version of this article was headlined "A Wider Landscape | "I AM ...: Exploring What It Means to Be a Vermont Artist," Spotlight Gallery"