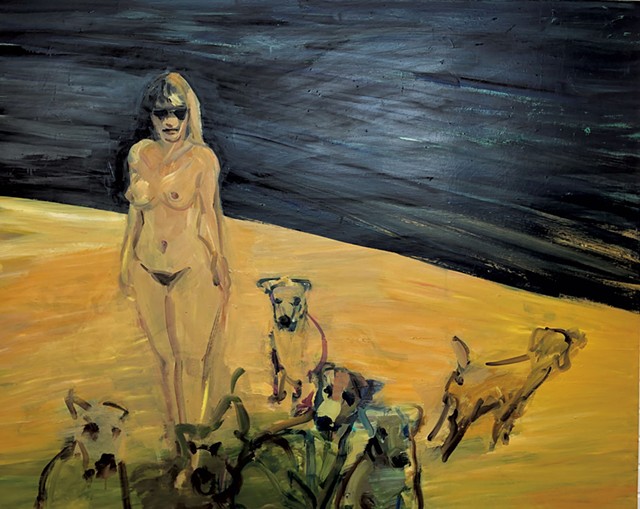 The Bundy Modern, a restored 1962 gallery perched on a hill in Waitsfield, is hosting a single show of two artists' work this summer. This is a departure for owners June and Wendell Anderson, who live in the building and are responsible for its sensitive restoration. Since opening the gallery in 2015, they have typically mounted two or three exhibits per season.

This pared-down season, the Andersons said during a recent visit, is an acknowledgment that visitors often can't manage attending multiple shows. The rural destination gallery is an hour's drive from both Stowe and Burlington.

The Andersons have also noticed that the building attracts as many visitors as the art, they said. Harvard Graduate School of Design-trained architect Harlow Carpenter's creation is a flat-roofed, modernist box with a 23-foot-high glass curtain wall in the front that frames stunning mountain views. Carpenter was instrumental in convincing his parents to fund architect Le Corbusier's only building in North America — Harvard's Carpenter Center for the Visual Arts, also completed in 1962 — and the Vermont building reflects "Corbu"'s deep influence.

The Bundy's daylight-flooded brick walls are an excellent place to see "Human Nature/Nature Human: Deborah Brown and Mark Barry," featuring two artists with very different aesthetics. The Andersons spotted Barry's work in the "Made in Vermont" show at the Hall Art Foundation in Reading last year. Barry is one of the few Vermont artists collected so far by Andrew and Christine Hall, whose foundation includes work by Gerhard Richter, Damien Hirst and other notables. He suggested the Andersons pair his work with that of his friend, Brooklyn artist Brown.

The two figurative painters share an interest in narrative — or at least vignettes — and both depict women with their dogs. (The dog link may have seemed more pronounced because Nina, the Andersons' black Lab, followed this reviewer from painting to painting.) Both artists seem less interested in details of the face than in expressions of the body.

But there the similarities end. Brown, a graduate of Yale University with a master's in fine art from Indiana University, is influenced by classical figurative painting. Her human figures, all female nudes derived from her imagination rather than models or photographs, verge on voluptuous without quite reaching it. These goddess-like, solitary women are alpha females surrounded by their packs of dogs. The latter sit with their owner and keep watch, ears cocked, or accompany her like an advance guard as she strides, in many cases, through water.

In three of Brown's paintings — "Avenger," "Shaded" and "On Guard" — the woman holds a sword, a reference to classical depictions of Judith, though she is unencumbered by Holofernes' head. (Brown has similar paintings in the series, not included in this show, that she titled "Judith.") Male bodies are absent from these paintings, leaving the eye to focus on the narrative possibilities of each nude female.

The kneeling woman in "Stream" seems chilled, shoulders hunched and arms held tightly to her body; her sidelong gaze singles out the viewer with an apprehensive look. The figure in "Climber 1" and "Climber 2," however, appears triumphant, wearing nothing but knee-high boots and scampering up a tree trunk or shaking a branch so energetically that leaves appear to scatter.

The nature in Brown's paintings is decidedly dreamlike, the land- and waterscapes belonging to no particular place. "House Boat" depicts a nude and her dog balancing on boards in a flooded room — the locus of a common recurrent dream.

Darkness inhabits all the paintings, encroaching on woods, streams and even the otherwise innocuously sunny beach of "Yellow Sands 1," which is bordered by nighttime black.

Brown's brushwork is loose and impressionistic. At times she draws with her brush, outlining figures with minimal strokes that nevertheless capture their movement perfectly — especially that of the dogs. In "Yellow Sands 1," the canines, possibly terriers, are outlined in unexpected colors, including red, blue and green. Nudes are shaded in greens and blues; apocalyptic streaks of red punctuate the darkness in "Avenger." Color, for Brown, is in the service of mood.

Barry's use of color, by contrast, is a defining aspect of his paintings, which depict humorous moments in ordinary life. In "Woman With Her Sampler," for example, a purple-haired woman, wearing a gray shirt and royal-blue pants, selects a chocolate from a box with obvious delight while the black dog at her feet raises its snout hopefully. Red walls and a window opening that's part yellow and part green complete the colorful palette.

The Bennington artist is a practitioner of faux-naïve art: He paints with the flattened perspective and childlike figuration of someone without training, but he earned a bachelor's in fine art at Swain School of Design (now part of University of Massachusetts Dartmouth College of Visual & Performing Arts) and pursued graduate studies at Johns Hopkins University.

A tabletop, its contents and its base are all represented on the same vertical plane in "Seated Woman." The effect is to leave the focus on the interaction of solid blocks of color: red table, blue background, green corner.

The bold color choices and flattened pictorial space bring to mind any number of experiments, starting with Henri Matisse's paintings from the 1910s and '20s, yet Barry's approach to figures is all his own. Far from Brown's voluptuous goddesses, the angular, skinny women he depicts in this show hold their feet in impossible positions yet somehow communicate a veracity of gesture and attitude.

The forager in "Scavengers" is practically wrapped around a tree in her focused determination to pluck a mushroom beside its base, one purple foot jutting into the air. The bathtub-bound figures in "Soak" and "Woman in Her Tub" cross their feet at awkward angles yet still look relaxed, their unrealistic limbs conforming to the tub's shape. 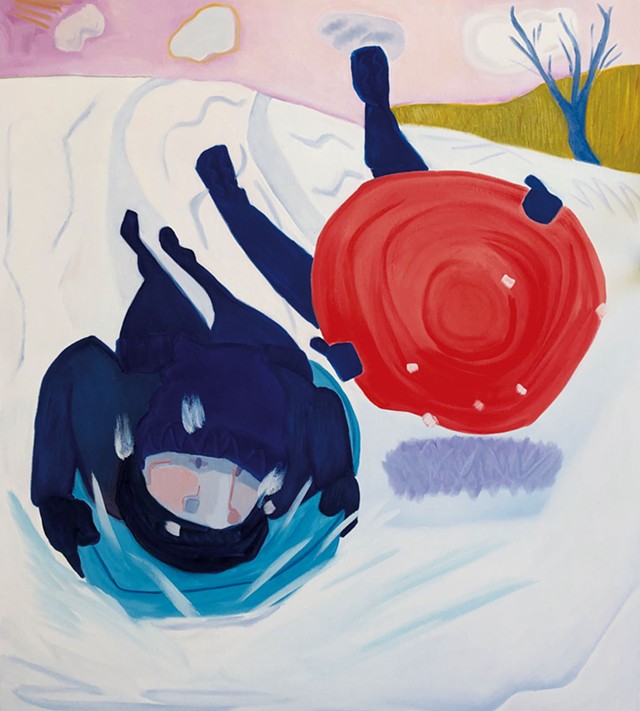 Barry tends to fill a canvas to its edges with stylized compositions whose forms echo each other. "Scallywags and Muse" depicts a water skier in a strapless red swimsuit, a baseball cap-grasping motorboat driver and a gleeful dog poised at the boat's helm — the muse. The painting's composition is a tightly wound spiral: The boat is being turned at speed, and the waves encircle its oval shape while the waterskier's position parallels its long side. Three blocky white clouds punctuate a strip of pink sky, their tops as flat as the canvas' edge.

Barry's ability to convey moments of excitement is evident in other paintings, including the humorously titled "Orbs of Death," in which two circular sleds hurtle side by side down a snowy hill. One is airborne, the other steered by a determined sledder. A more refined style or more realistic colors could hardly make a viewer feel the same excitement, or chuckle with the same level of recognition.