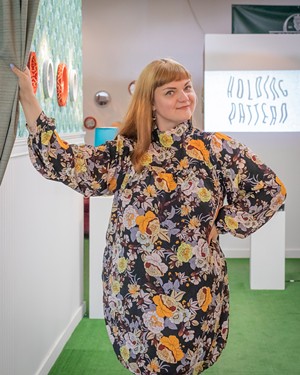 Clever messaging begins with the very title of Christy Mitchell's latest solo installation at Burlington's S.P.A.C.E. Gallery. "Holding Pattern" is a double entendre — at least — and one meaning is immediately evident in Mitchell's use of old-school patterned wallpaper. Less obvious is what the installation might hold, both for the artist and for viewers. The title suggests a code we're invited to decipher.

Mitchell, 40, has presented an annual solo show since 2013 in the gallery she founded a dozen years ago. All of the installations have been self-referential, but not in the strict sense of presenting a narrative of her experience. Instead, Mitchell reflects on the preceding year and her own passage through it, develops an exhibition concept, and assembles found and handmade objects in support of her vision.

"It's more about the story you're trying to tell than about the material." Christy Mitchell tweet this

A love of vintage has always informed Mitchell's aesthetic; she's enamored of artifacts that were in use long before she was born. But viewers should not read these collections as advocacy for a "simpler" time. While the presence of midcentury-or-older analog objects and images speaks implicitly to a set of values, lifestyles and technologies different from today's, the artist is more interested in examining what we tell ourselves and each other — or don't.

"Holding Pattern" offers a sort of visual anthropology that yields — if we look closely enough — evidence of human communication. Mitchell's written description of the exhibit evokes this power of artifacts to speak: "If these walls could talk about the things that we say and what we hide from the public, what would they tell us?"

Moreover, the artifacts' materiality itself contributes to the conversation. "I'm exploring the idea of time travel, in a way," Mitchell said on a recent gallery tour. "Objects kind of have their own story." 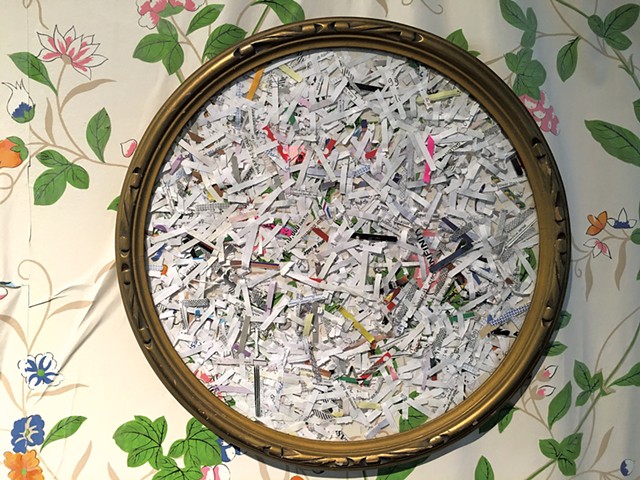 This exploration is universal and, yes, unbound by time. In her summoning of the past, Mitchell's autobiographical pursuits mesh with her broader humanistic curiosity.

Like her previous installations, "Holding Pattern" occupies a 17-by-19-foot room and a wide hallway — nearly the entire venue, minus the warren of small artist studios surrounding the exhibition space. Mitchell likes to guide a visitor starting from the installation's beginning, which is marked by a guest sign-in book on a small table and a curtain one must open to enter the hallway.

Conceptually, Mitchell describes the installation as "set in an early 20th-century Victorian-style home," and she thinks of each section as representing a room in that house.

"Once you walk in, you're in a different place," she said. Indeed. On one side of the hallway, Mitchell has hung colored images of factories, other workplaces and cars, all decidedly of an earlier era. (The cars, abounding in tail fins, represent an American dream that is not available to everyone, Mitchell noted.) The opposite wall is half covered with white beadboard and half with floral and striped wallpaper. On it hangs a row of round mirrors, each laser etched with a single word in Mitchell's own cursive: "thoughtful," "look," "feeling," "timeless."

From the start of the exhibition, it's clear that wallpaper isn't just for walls; Mitchell has made inventive use of the vintage rolls she's collected over the years. At the entrance, the glass of an antique oval frame holds a blue-and-green botanical pattern on which are layered the words "here we are," again in Mitchell's cursive, cut from red and yellow paper. Some of the picture frames are wrapped in wallpaper. So is, meticulously, a vintage desk telephone. 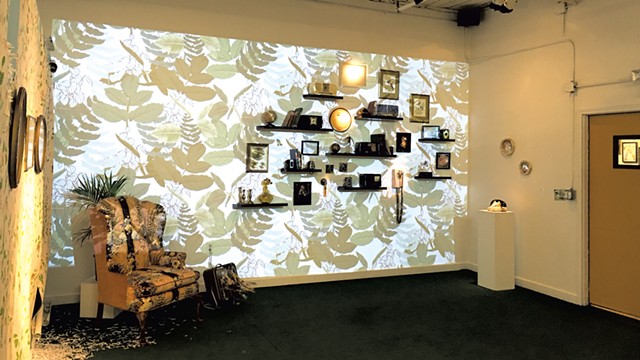 One wall in the main gallery room contrasts with the artfulness of these efforts. Near the floor, a strip of wallpaper bulges outward, and from the gap spill shredded strands of other papers. It's as if the wall can no longer contain the secrets stuffed inside it; they are liberated.

Beside the bulging wallpaper strip, two others have been applied haphazardly, peeling on the edges and revealing a blue-painted wall beneath.

Mitchell referred to the spilling paper strands as "remnants of my life." She has framed other wallpaper shreds behind glass in round frames, like museum specimens.

Given voice, what stories might these papers, rips and shreds tell us?

"Art is a feeling thing for me," Mitchell mused. "With conceptual work in general, it's more about the story you're trying to tell than about the material."

Another wall of the room is even more dramatic. Here Mitchell has installed shelving to display vintage radios, earlier artworks, books and other objects. The "wallpaper" on this wall is actually a botanical-patterned projection — lighting courtesy of Jason Liggett of Burlington-based Liggy Lights and Satellite Arts Productions. The resulting light and shadow add complexity and intrigue to an evocative collection of artifacts.

Mitchell believes the projection "speaks to the transience of time."

To borrow an expression circulating on social media these days, the artist has created a "big mood" in this room. "This is the study or the library of the house," Mitchell suggested — and it offers much to study. The wall with shelving represents something of a mini retrospective, Mitchell revealed: It contains "one piece from every show that I've done here — mementos of my progression over 10 years."

One shelf holds an even older piece that Mitchell made in her senior year at the Savannah College of Art and Design, where she focused on metal working and jewelry. Intended as a headpiece, the sculpture features letters cut from metal "fronds" — a precursor to her current text-centric work.

Last year, when the pandemic caused the cancellation of exhibitions and events, Mitchell had extra time to ponder her presentation of "Holding Pattern." Her title also refers to this uniquely challenging and isolating period. "As we are collectively released from the holding pattern of the last year," her exhibition statement reads, "a critical eye must be trained on what we will take with us and what should be left behind."

All of Mitchell's installations have been, to some extent, about her state of being, so it is good to know she looks favorably on this one. "This show is admitting to the story lines of the past that I have grown," she said, "and am doing well."

"Holding Pattern" by Christy Mitchell, on view through August 7 at the S.P.A.C.E. Gallery in Burlington. Closing reception on First Friday, August 6, 6-9 p.m.

The original print version of this article was headlined "If These Walls Could Talk | Review: "Holding Pattern," Christy Mitchell, the S.P.A.C.E. Gallery"