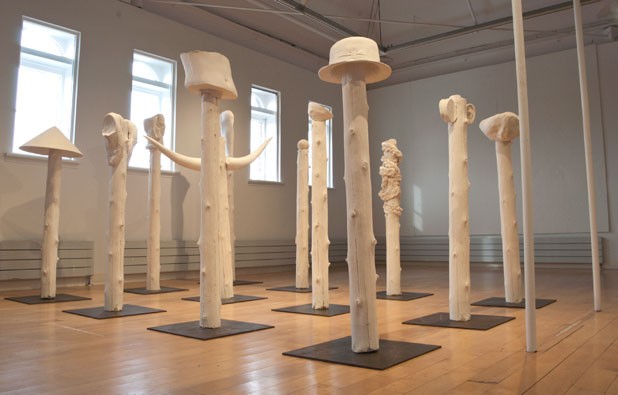 Burlington artist Gregg Blasdel grew up in Belle Plaine, Kan. — near Wichita, he explains, referencing a more recognizable geographical point. Similarly, his enigmatic sculptural installation, “Bounty,” registers proximity and distance at once, marking time and place, the familiar and unfamiliar.

Visitors to “Bounty,” located in the fourth-floor exhibition space of the BCA Center, encounter a dozen white, cast-plaster objects of various sizes affixed to identical fence posts about three feet tall and also made of white cast plaster. Square steel plates support the individual fence posts, creating a tightly arranged grid in the center of the room that makes it difficult to move among the objects without disturbing them. The posts, unlike the objects, retain a material connection to their usual function: assuring our distance, prohibiting close contact.

The idiosyncratic collection includes a large, oval stone Blasdel cast years ago but never used; steer horns; a fedora; ears cast after Michelangelo’s “David” and a hedge ball — the inedible fruit of the Osage orange tree. All are ordered according to a taxonomy unique to the artist’s life experiences. Blasdel sees the objects as markers of specific personal memories and interests, yet they allow that history to function as “a point of departure,” he says. He imagines the entire piece as a private puzzle that may not “mean anything to anyone else.”

Blasdel, who was the BCA Center’s 2012 winner of the Barbara Smail Award, describes the intuitive process of collecting the objects over eight years as integral to the work. Marking time through the stages of collecting or making something is an ongoing interest of his. Blasdel cites Victorian hair wreaths as an example of objects that document time through their constructions. Victorian women in Europe and North America created elaborate wreaths from the hair of friends and relatives, both living and deceased, as objects of remembrance.

Reflecting on the volume of things he has collected and will leave in the world, Blasdel appreciates the “ephemeral nature” of the materials with which he has chosen to work, he says in an interview at the gallery. He casts the objects in plaster, never in multiples, using rubber molds made from the objects. Many of these objects no longer exist. Blasdel leaves the physical characteristics of the casting process visible; he resists polishing or removing the seams, ink stains and extruded plaster. The casts are the end result of a replication process emanating from a place that can’t be traced.

“By casting [the object], I remove it from its system,” Blasdel says. He refers to what remains as “an authentic fake” or “false object.” Stripped of its natural color and context, the thingness of an object and what we know about it are destabilized in Blasdel’s hands. What remains is the trace of the familiar, much like a memory or a dream left for us to reconstruct.

Several of the objects do retain geographical specificity, however: The steer horns and the hedge ball are indigenous to Kansas, according to the artist. Blasdel says that his impulse to mark time and place was also inspired by the work of artist Richard Artschwager — a series of pieces collectively titled “blps,” created during the late 1960s and early ’70s. While living in New York City during that time, Blasdel encountered Artschwager’s lozenge-shaped sculptures fashioned from horsehair and placed on various buildings and other sites throughout the city. Blasdel says the work was instrumental to shaping his own artistic vision, as he started “tying particular geographic spaces together and thinking about space and spatial considerations.” (Last fall, for an Artschwager retrospective, the “blps” were reinstalled in collaboration with the Whitney Museum of American Art in various locations around the High Line in New York City.)

Although “Bounty” is embedded with subtle, interconnected references to many of Blasdel’s geographic memories — wood from the Osage orange tree was commonly used for fence posts, for instance — the artist hopes viewers will “activate” the installation with their own memories and experiences.

With its disparate parts alluding to an imagined whole, “Bounty” is a beautifully constructed landscape of memory, time and lived experience. It is a generous, open-ended representation of Blasdel’s psychic geography.