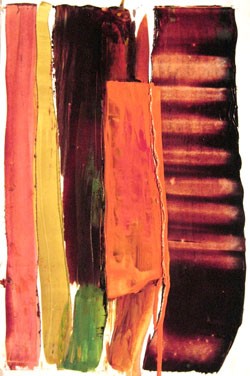 Water is the theme but not the medium of Gail Salzman’s sensual solo show of abstract paintings currently at the BCA Center. The veteran Vermont artist is here conducting a “metaphorical investigation of water’s seen and unseen influence on our lives,” according to a wall text introducing her show “Soundings.” Most of the 10 large-scale and three dozen smaller works can readily be read as inspired by the pond outside Salzman’s Fairfield studio and by the Maine seashore, where she paints each June. But the aquatic allusions are conveyed not through gauzy watercolors but by means of what she calls the “juiciness” of oil paint.

Creamy swabs and streaks have been poured, dripped and sponged onto aluminum panels in the big paintings. Similar effects are achieved on wood in the “Palette” series of smaller pieces. Salzman gave these similarly sized works that collective title, she informs gallery visitors in a cellphone commentary, because they are the finessed products of leftover paint wiped from her palette after a day’s work in the studio.

Salzman performs a few neat feats at BCA. For one, her layers of oil paint are made to appear translucent despite their frequently thick application. She also has a knack for combining colors harmoniously, even when some of her juxtapositions — brown and blue, for example — could appear odd and off-putting rather than cannily complementary. The ochers and umber used in several pieces shouldn’t prompt associations with water, yet they do. Given the watery premise of the show, Salzman’s dark passages can be seen as strands of seaweed or globs of algae floating in shadows.

Most impressive of all, no two paintings look alike. Viewers are comfortably transported from one work to the next, but there’s no sense of repetition in “Soundings.” Each painting has something new and different to say.

And, at least for this visitor, one of the pieces had an auditory dimension. Perhaps others will experience a moment of synesthesia and find themselves actually hearing the crack of thunder that an arcing swipe of orange lets loose in “Sudden Rain.” The show is called “Soundings,” after all. While Salzman tells us she chose that title to refer to measurements of water’s depth, she probably won’t mind if it takes on a broader meaning for viewers.

In one of her cellphone monologues Salzman speaks of “immersion” in the paintings. She comes close to achieving that literally in “Fount,” which appears to have been composed underwater — maybe in a submersible, maybe by the artist morphing into a mermaid. This effervescent piece calls to mind the line from the Talking Heads song “Once in a Lifetime”: “Remove the water from the bottom of the ocean.”

White bubbles float upward against a deep blue background in “Fount,” trailing tendrils that make them look like sperm swimming against gravity.

In keeping with the subject matter that inspired the works in this show, nearly all of Salzman’s shapes are amorphously organic, with little evidence of how they came to be created. In “Soundings,” geometric forms are about as uncommon as brushstrokes. They do appear here and there, but the painter’s process, like her product, is more mysterious than familiar.

Some viewers may be reminded of Helen Frankenthaler’s soaking technique — the allusion being a testament to Salzman’s technical wizardry rather than a suggestion that her paint handling is imitative. Frankenthaler saturated canvas, a permeable material, while the Vermont artist makes an impermeable surface, aluminum, look like it’s been marinated in a mix of pigments.

Representation makes only a fleeting appearance in “Soundings,” and even then it may be more in the eye of a viewer than in the intention of the artist. In “#8” of the palette series hung in BCA’s front room, a head and torso can be seen inside a circle that might be a magnifying glass. And could that partly obscured circle in the upper left corner of the same piece be an eclipsed moon?

Almost every piece on display has its allure, but the real show stopper is a simply composed panel in the palette series referred to only as “#2.” It’s as arresting as any of the celebrations of color that spill onto the frames of paintings by contemporary British artist Howard Hodgkin, who composes with a flair that Salzman shares.

Five vertical bands stand side by side in “#2,” each nudging or merging into its neighbor. The left-to-right color progression — from bright to somber to mournful to vibrant, to a stripey combination of the latter two tones — is captivating. But what appeals most powerfully is the “juiciness” of the paint. It’s so luscious you’ll want to lick it.

The original print version of this article was headlined "Watery Wonder"