The funniest and one of the most affecting artworks in "Eyes on the Land," a show inspired by Vermont's conserved farms and forests, isn't at all earthbound. Suspended from the ceiling, Brian Collier's "Goat Boat" seems to float over the heads of viewers in the Shelburne Museum's Pizzagalli Center for Art and Education.

This milk-jug-supported, grass-covered raft with stuffed goats aboard is part of an installation that arose from the artist's interactions with the Pine Island Community Farm on the Colchester side of the Intervale. African immigrants and other New Americans raise goats and vegetables on the 230-acre parcel preserved through the Vermont Land Trust. Collier's whimsical creation, which he describes as "infinitely expandable," would enable the farm's goats to continue grazing, safe and dry, when floods submerge the Intervale's pastures. And those inundations, the show's organizers point out in a jarring aside, are likely to become more common as waters rise on a warming planet.

Collier is among 13 artists who were commissioned by the Shelburne Museum, in partnership with the Vermont Land Trust, to spend a year observing specific pieces of conserved land. They then made paintings, videos, sculptures, photos and multimedia works in response to what they saw and felt. Each artist was given a stipend of $500, which Elise Annes, VLT's vice president for community relations, acknowledges did not even cover the cost of materials in many cases.

The 15 scattered sites included in the project are marked on a large map at the entrance to the exhibit. When visitors aim museum-supplied iPads at any of a half dozen of the parcels highlighted on the map, a digital video on the tablet provides background on the property and comments from the respective artist. The settings selected for the show represent a small sample of the hundreds of parcels — comprising 9 percent of Vermont's total acreage — that the trust has preserved from development.

The lands are varied in their topography and functions, and the mediums and methods the artists employed in their works are likewise diverse. All the pieces are well executed, but they vary in aesthetic impact. Some are pedestrian in their documentary-style approach; others are exuberantly imaginative. Many of the text panels accompanying the works refer to the spiritual or mystical dimensions of the artists' encounters with the land. Clearly the participants were moved by their experiences, but this viewer found the repetitive riff cloying and annoying.

Two of the strongest pieces in the exhibit are rooted in realism but incorporate abstract and multimedia elements to produce beguiling visual effects. 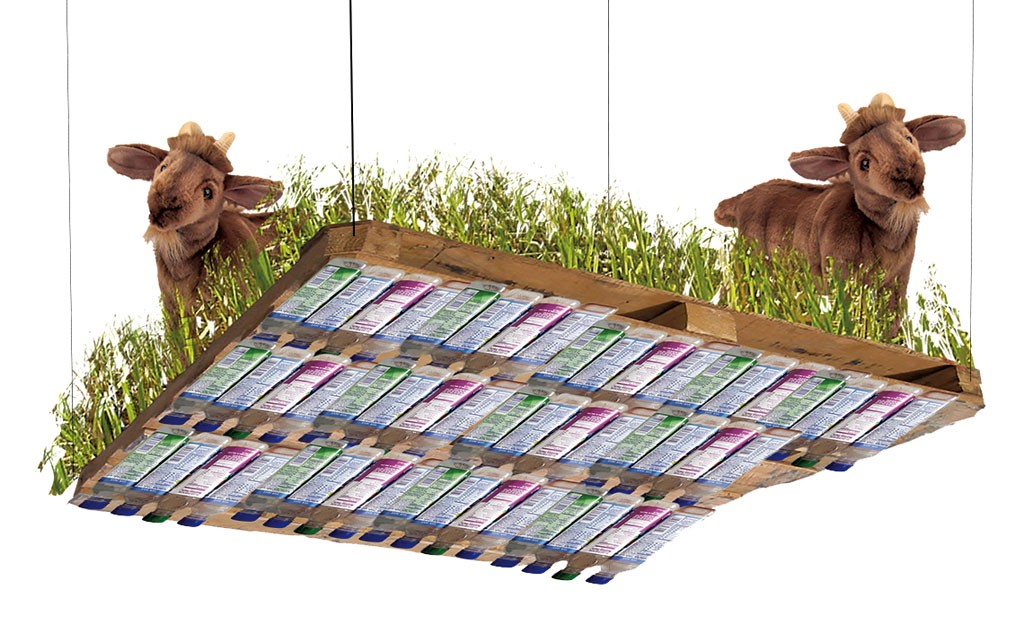 Burlington artist and indefatigable civic activist Bonnie Acker combines a paper collage of a farmer weeding a field with a large-scale, nonrepresentational quilt hung on a wall a few feet behind it. The sewn object blends beautifully with the rich colors and undulating forms of the collage. Acker also includes a bowl holding bits of fabric and handmade paper that viewers are invited to take away as mementos.

Cameron Davis, a teacher of art and art history at the University of Vermont, contributes a painting of apple blossoms and branches at Champlain Orchards in Shelburne. The work is reminiscent of Monet's treatments of water lilies in his garden at Giverny. In both cases living things, lovely in their own right, are expressed as harmonious blurs and tangles of paint. Taking a similar approach to Acker's, Davis has added a modestly scaled installation in front of her piece, titled "Tenalach" — an Irish word that can mean something like "deep spiritual connection to a place." Seven vials of cider pressed from the orchard's apples are lined up like votive offerings atop a wooden table. The effect might be more reverential if the vessels of amber liquid didn't also resemble urine samples.

An especially appealing piece in "Eyes on the Land" is squarely traditional in its rendering of three farms along the Connecticut River in Windham County. Charlie Hunter, a painter and concert presenter based in Bellows Falls, rocks the Renaissance in his horizontal triptych. The paintings are composed in oil but employ a technique that makes the paint resemble distemper, a glue-based medium used by artists such as Raphael. The sepia scenes of fields and barns conjure a melancholy mood consistent with Hunter's stated practice of making "murky paintings of decaying American infrastructure."

Caleb Kenna effectively juxtaposes old-timey and new-techy Vermont in a set of photographs taken at Russell Farm in Hinesburg and Butternut Mountain Farm in Johnson. The family-run sugaring operation on the edge of Burlington suburbia still harnesses draft-horse power to collect sap from metal buckets that are poured into the pan of a wood-fired evaporator.

David Marvin's Butternut Mountain business in Lamoille County ranks as one of the largest producers of maple syrup in the country. As Kenna's photos suggest, it's possible for an ultramodern agricultural enterprise to treat the land's resources with as much respect as does a sugarmaker operating the way her father did decades ago.

Montpelier-based sculptor and installation artist Gowri Savoor celebrates the VLT's preservation of 1,160 acres of backcountry at the upper reaches of the Bolton Valley Nordic Center. She used a 3D printer to produce hundreds of black seed-like shapes that are arranged in sets of concentric circles against a white wall. It's not clear how this piece relates to the Bolton wilderness, but that won't matter to viewers who become mesmerized by Savoor's swirling design. The link between land and art is as firm as frozen snow in the two other works, both inspired by relief maps, through which Savoor responds to Bolton's craggy topography.

"Eyes on the Land" is unique in its pairing of the Shelburne Museum with a Vermont conservation group. But this show can't be considered original. In fact, it's easily confused with the 2015 iteration of an annual Burlington City Arts exhibit titled "Of Land and Local," part of which is on display two miles away in the Shelburne Farms Coach Barn. (See story on page 26.) As in the case of "Eyes," artists represented in the BCA show were asked to produce pieces inspired by their experiences of specific Vermont settings.

In a preview tour of the museum's show, curator Kory Rogers confessed that "It never occurred to me to collaborate" with dj Hellerman, his counterpart at BCA. That's too bad. Each show would be strengthened by a combination with the other. Either way, viewers of both will likely find that what Rogers calls the "edgier" creations in "Of Land and Local" serve as a counterpoint to the generally tamer — and more visually pleasing — pieces in "Eyes on the Land."

The original print version of this article was headlined "Land Minds"