When Marshall McLuhan coined the phrase "The medium is the message" way back in 1964, the theorist and author was referring specifically to communication media. But the dictum could readily apply to artwork — in at least two ways.

First is the object itself: An oil painting or an assemblage or a photograph conveys different information about the artist's tools and skills. Second is the content — what the artist is saying.

"Are You Here?" expresses both components in a cleverly blatant way. Jonathan Gitelson's piece in "Exposed" — the annual outdoor sculpture show in Stowe — is actually a billboard. To be precise, it's an 8-by-16-foot white-painted rectangle with the question "Are You Here?" centered in bold black Helvetica typeface.

Sited near the Main Street entrance to the town's rec path, the Brattleboro artist's sign is impossible to miss. And his query — a spin on the "You Are Here" indicator of many a site map — puts receptive viewers in a thoughtful frame of mind for this provocative exhibition. It essentially asks, Are you paying attention?

Every single entry in "Exposed 2021" — 11 works by 10 artists — has something to say, and the best way to appreciate them is to be open to thinking and learning.

Of course, that's usually the best way to approach any art. But particularly now, artists and curators worldwide are grappling with fraught issues — political, social, racial, environmental — not to mention the very raison d'être of art institutions. For Rachel Moore, executive director and director of exhibitions at the Current, which curates "Exposed," presenting artists who speak to this moment is mission critical.

"It's important to us as an organization," she said. "Part of our plan is to engage with specific issues and provide a platform for these voices."

With a chuckle, Moore admitted in a phone call that sneaking a verboten billboard into Vermont "feels a little rebellious." But more importantly, she said, "I love that during this busy time, there's this big sign asking you where you are. It can be interpreted in so many ways."

The exhibition makes clear that success and failure come in many guises. tweet this

The same can be said for "Arrow Sculpture." That's the no-nonsense title of a piece on the gallery's lawn composed of two arrows: one pointing up and one down. Tony Tasset's large-scale 3D piece is constructed of aluminum, and every plane is enameled with a different, vibrant hue. It's a striking pop-art object, a universal symbol that could suggest anything from the stock market to the human capacity for profound disagreement.

In an audio statement, the Chicago-based artist gives his own explanation: "Everything is in a state of constant evaluation: trending up or down, what's in, what's out, who's hot and who's not." His icon-like piece is, Tasset suggests, a "monument to this perpetual state of succeeding or failing."

The exhibition makes clear that success and failure come in many guises. Across the lawn, an invitation of sorts is emblazoned on the building that houses the Current and the town library. The text installation, titled "Inspired by 'What Is Left,'" comprises three lines of large block letters affixed to metal fencing above the porch. They read: "Come celebrate with me / that everyday something has / tried to kill me and has failed."

The lines are from a 1993 poem, "won't you celebrate with me," by Lucille Clifton. The artists who've enshrined her words call themselves Brooklyn Hi-Art! Machine. Mildred Beltré, an associate professor at the University of Vermont, and Oasa DuVerney founded the collaborative project in their Crown Heights neighborhood and use art as a community-building tool.

In Stowe, viewers of all ages have been prompted to parse the meaning of their installation, according to Moore.

"I love hearing about people trying to figure it out," she said. Even a group of sixth and seventh graders on a recent visit understood "that it's about social justice."

New York City-based Daniel Bejar incorporates poetry, too, in his sculpture titled "Monument for Immigrants (in Advance of an ICE Raid)." Without the exhibition map, a visitor might overlook this work, sited on a spit of grass near Black Cap Coffee & Beer. The town's seasonal adornments of mums, straw bales and pumpkin-headed mannequins distract from the piece — essentially a fake rock — and thus inadvertently abet Bejar's theme of obfuscation.

The artificial rock, like the molded sort used in landscaping, represents a sanctuary space and covert shelter for migrants evading Immigration and Customs Enforcement, the artist posits; its hollow interior contains necessities such as water and a burner phone. What sets the sculpture apart from any old hunk of stone, however, is a faux bronze door/plaque imprinted with the poem "Immigrant" by Rupi Kaur. Its resonance with the Statue of Liberty is eloquent.

The intersectionality of language and art ripples through this year's "Exposed," but in some cases the messaging is cryptic.

Two installations by Lynn Sullivan consist of long banners of black fabric suspended between trees; words are cut out of the fabric, forming a kind of negative space through which the landscape can be seen. One of the pieces contains the word "If"; the other, a phrase: "Long Time No Ocean."

In her audio statement, the Vermont- and Brooklyn-based artist says she finds inspiration in protest posters, road signs and celebratory messages. Noting that her banners evoke an uncertain environmental future, she is content to "let gravity and wind change the messaging from legible to obscure."

Unfortunately, Sullivan has had to endure another form of degradation: vandalism. "She's actually witnessed people destroying her piece while trying to take a selfie, sticking their head through the letters," Moore said. "She said to just leave it tattered."

If that kind of behavior is simply thoughtless, other violations of the artworks in "Exposed" appear to be intentional. 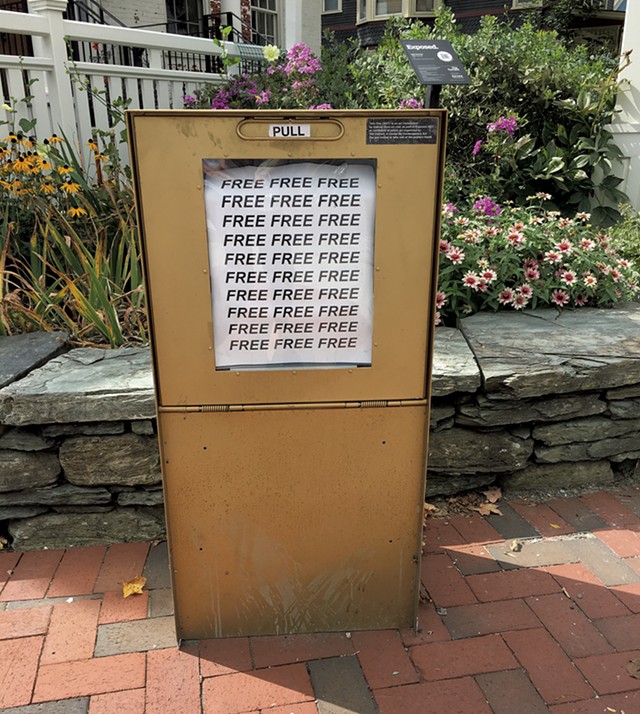 Cuban American artist Gabriel Sosa created three variations of "Take One," a receptacle in the familiar shape of an outdoor newspaper box. In the front "window" of the gold-painted box on Main Street, Sosa displays a piece of paper printed with the word "free." The boxes invite passersby to take a poster from inside that is printed with questions posed to defendants in the "criminal injustice" system, he explains in his audio statement.

According to Moore, some of those passersby have instead put things in the boxes: trash. It would be charitable to suggest that people mistook the artwork, despite its clear labeling, for disposal bins — except that Sosa's "Take One" box on the rec path was so vandalized it had to be removed.

This disrespect for public art certainly sends another kind of message.

Aptly named, "Exposed" both celebrates artists' vision and craftsmanship and shows us where we are.