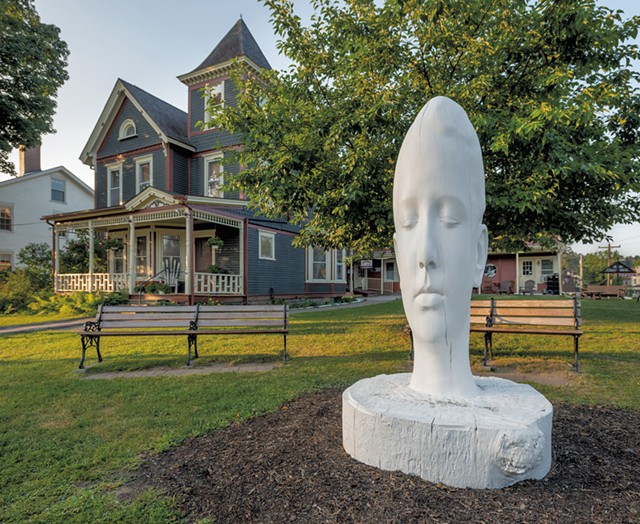 On the lawn of the Helen Day Art Center, afternoon sunlight angling through the trees dapples "Interlace," adding a sense of movement to the already complex sculpture. The weathering steel behemoth — 10 feet high, 7.5 feet wide and a couple feet thick — by renowned Rochester, N.Y., artist Albert Paley is true to its name with layers of abstract cutout shapes. Though welded together, the almost-airy-looking pieces seem to adhere by choice, as if flying apart at any moment were an option.

That the vagaries of natural light can make an artwork even more visually stimulating is a presupposition of "Exposed.," the annual outdoor sculpture exhibition sited at Helen Day and in the village of Stowe. The daily movement of the sun contributes shifting shadows on and around each work. When sculptures have mobile elements, such as the ones on Morrisville artist Judith Wrend's painted aluminum "Here/Now," the very air gets involved.

And then there is the 360-degree access to the works. Though large-scale sculptures inside a gallery usually allow for viewing from all sides, something about their placement outdoors seems to encourage passersby to move around, interact with and touch them. "Exposed." makes art as accessible as a playground.

That said, on a recent warm day in Stowe, many roaming visitors seemed more intent on finding cold drinks or ice cream than on viewing the works. Art appreciation can't be forced. But, if asked, most would surely have allowed that lining the walkways with imposing sculptures makes downtown more interesting, at least.

Emphasis on downtown: This year, construction on Stowe's recreation path precluded its use as a strollable gallery. As a result, "Exposed." is a more modest endeavor, with just nine sculptures — compared with 12, 20 and 17 in the last three years, respectively.

The sinewy rec path is missed. Discovering sculptures among trees or in clearings of tall grasses around curves added surprise and more dramatic visual contrasts to the experience. And the path is quiet, allowing for a more contemplative walk than does the heavily trafficked Main Street.

None of those considerations detract from the achievements of the artists whose works are sited amid the hubbub. The attentive viewer can still find much to appreciate — and go in search of an ice cream afterward.

Christopher Yockey's 3D computer-guided jumble of shiny stainless steel shavings on a bed of white concrete is titled "Wedding Gift." The Detroit-born, New York City-based artist says the union of two friends inspired the piece, but as a literal gift it would be a bear to wrap. At 52 by 55 by 59 inches, the convoluted ribbons, despite being made of cold industrial material, caused this viewer to think of tangled Christmas-tree lights somehow standing stiffly at attention.

A large head by Barcelona native Jaume Plensa, curiously titled "White Forest (Duna)," is likewise curious in materiality. Though described as bronze, the 77.5-by-43.25-by-40-inch piece resembles white-painted wood. The base looks like a slice of tree trunk, complete with crenellated bark and cracks. But if the fabrication is confounding, the subject is not: This androgynous model is serene, eyes closed in meditation, a contemporary bodhisattva unruffled by the fray. Plensa has sited similar, and much larger, heads and figures around the world.

If Plensa's sculpture says, "Be here now," John Matusz's untitled steel-and-boulder work says, "Stop here this instant." The piece is stolidly physical, a sculptural linebacker. In an artist statement, Matusz calls his work "a framed piece of landscape." An unusually shaped boulder, unpolished, is supported by a sign-like structure — steel base, vertical post and square "frame" 79 inches tall. The Vermont artist honors the earthy beauty of a giant, ancient rock — and perhaps suggests this bulwark will outlast all of us. 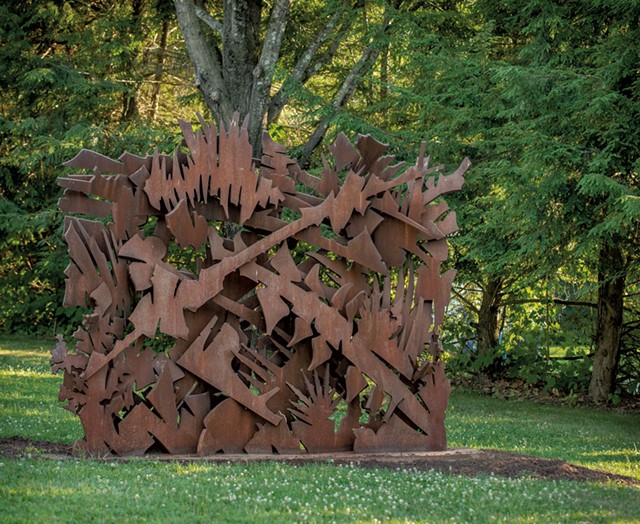 "Exposed." curator Rachel Moore has not eschewed a sense of playfulness. Ted Ceraldi's "Gravity," in welded, bolted and painted steel, is a 120-inch-tall pyramid with a 72-inch-square base. It commands attention at the junction of Main Street and Mountain Road. But its title is ironic: A large, red-painted sphere — also of steel — perches near the tip of one triangular side with the seeming effortlessness of a clown nose. Though Ceraldi's enigmatic artist's statement speaks to the "present condition of humanity," this work reads more as having fun with geometry — and appearing to defy a physical law.

Similarly, Chris Curtis has done an "impossible" thing in "Paleo Puzzle." The Stowe sculptor cut a 54-by-28-by-28-inch hunk of stone into three jigsaw pieces, polished the interior surfaces, and stacked them back together. Sitting on a circular steel base, this work invites viewers to survey all sides and decipher how it was done.

While making physical reference to a game, Curtis also ascribes cosmological meaning to his puzzle. "This sculpture, like most of my work, is about examining the context of humans in the world," he writes in an artist statement. "By this I mean not just the physical world of today, but also the temporal context of Homo sapiens through geological timescales."

Back on the Helen Day lawn, David Stromeyer's "Slice Rock" might suggest something similar if it weren't made of painted steel. The sheer physicality of Stromeyer's work, on ample display in his Cold Hollow Sculpture Park in Enosburg Falls, astounds here as well. The roughly organic shape and pinch-pot-like "handles" suggest a humble, handmade object. Yet "Slice Rock" is massive: 111 by 105 by 129 inches. It is simultaneously familiar and strange, innocuous and menacing.

A second sculpture by Paley at Helen Day, a more compact assemblage than "Interface," consists of stacked columns and curled ribbons of black-painted steel. Its name is "Portal." And that alluring word could represent this entire exhibition's invitation to the public: to enter, to see, to be exposed.

The original print version of this article was headlined "Full Exposure"